The Verdi union has called on ground staff from the German national carrier Lufthansa to strike on Wednesday. Here's what you should know, and how it will affect those travelling.

Trade union Verdi has called on 20,000 ground staff employees from the German national carrier Lufthansa – including technicians and logistics managers  – to take part in a one-day ‘warning strike’ on Wednesday, July 27th.

The strike action started at 3.45am on Wednesday July 27th and will last until 6am on Thursday July 28th.

How will this affect travellers?

People travelling by air this week will see major disruption, especially at Frankfurt and Munich airports - the largest Lufthansa hubs.

The airline giant said it is cancelling nearly all of its scheduled services at these airports on Wednesday, but there are also cancellations on other days.

In Frankfurt, a total of 678 flights are being axed, including dozens no Tuesday and 646 on Wednesday. It's expected to affect 92,000 passengers.

Ahead of the strike, Frankfurt airport operator Fraport said: "Due to a planned strike by the German union Verdi, representing Lufthansa ground personnel, on Wednesday, July 27th, flight disruptions and cancellations are likely to occur during the whole day also at Frankfurt Airport."

The operator urged passengers to check the status of their flight before departure at www.lufthansa.com.

Lufthansa ground staff are also stationed at Düsseldorf, Hamburg, Berlin, Bremen, Hanover, Stuttgart and Cologne. The Lufthansa Group maintains smaller units in these spots which offer their services to other airlines.

"Since all ground workers, including Lufthansa Technik, which is responsible for maintenance, and LEOS workers, who use pushback vehicles to ensure that aircraft are pushed back into the appropriate positions, are called to the warning strike, there will be major flight cancellations and delays," said Verdi in a press statement.

Customers have complained of difficulties in finding out information.

Passengers have also seen intercontinental flights to the USA or Hong Kong cancelled. These are usually the last flights to be cancelled by Lufthansa in the event of a strike.

Lufthansa warned transfer passengers not to fly to the German hubs without a connecting flight. They said there was a risk that passengers would not be able to continue their journeys there for several hours or days.

What's the strike about?

"It is important for Lufthansa to give disproportionate consideration to the lower remuneration groups in particular," said Lufthansa in a statement. "For example, for employees with a basic monthly salary of €3,000 euros, the present offer means an increase in basic remuneration of nine to almost eleven per cent within the next 12 months."

The union says the management's offer so far "does not come close to compensating for inflation" which was 7.6 percent in Germany last month.

Isn't there already a ton of chaos at German airports right now?

Yes. In general, flights across Europe (and sometimes further afield) are being cancelled at short notice, passengers are facing long waits at security and check-in, and luggage is going missing.

The problems are down to crippling staff shortages after companies got rid of staff during the pandemic, or workers left to find other jobs. This, combined with the demand for travel after restrictions were lifted in lots of places, has resulted in chaos. 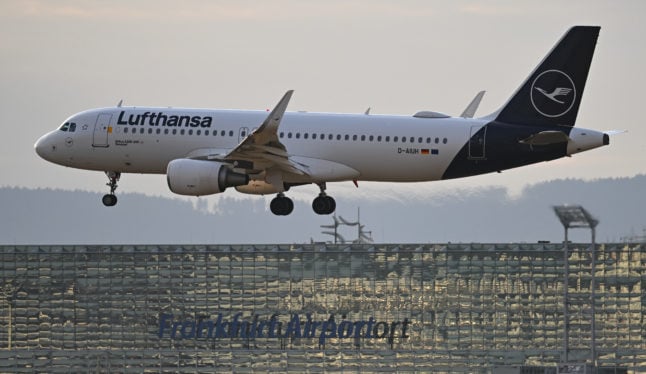 The IW economic institute recently calculated that there is a shortage of more than 7,000 employees in Germany's aviation sector.

The German government eased immigration rules so that companies could hire workers temporarily from abroad, but this is also proving difficult, leading to worries that the chaos will continue until at least October.

Lufthansa, which announced it was laying off 30,000 staff during the pandemic, has already scrapped 6,000 flights from its summer schedule this year as it struggles with staffing problems.

Lufthansa CEO Carsten Spohr previously wrote in an open letter to customers, that the sudden increase in air traffic from nearly zero at the height of the Covid travel restrictions to around 90 percent meant the industry could not deliver its usual “reliability, robustness and punctuality”.

In another letter to employees, Spohr admitted that the management had made mistakes over the previous two years.

What are both sides saying about the current strike?

Michael Niggemann, Chief Human Resources Officer and Labour Director of Lufthansa said: "After only two days of negotiations, Verdi has announced a strike that can hardly be called a warning strike due to its breadth across all locations and its duration."

"This is all the more incomprehensible as the employers' side has already offered high and socially balanced pay increases - despite the continuing tense economic situation for Lufthansa after the Covid crisis, high debt burdens and uncertain prospects for the global economy.

In a press release, Verdi called the situation at airports in Germany "currently unbearable on many days - for the workers and passengers".

"But the employees are not responsible for the long waiting times, cancelled or missed flights and missing luggage," said Verdi.

"On the contrary, after two years of the pandemic and massive job cuts, the remaining ground services and security staff are doing their best every day to keep air traffic moving. But the workers are running out of steam. Mainly because their employers are doing little to improve their situation."

Lufthansa ground staff "urgently need more money and they need relief, for themselves and for the passengers", said Verdi vice-president Christine Behle. "The employers' offer is not enough."

Behle asked air passengers for their understanding and pointed out the "extremely problematic situation of the employees, which was mainly caused by mismanagement".

Will there be another strike?

It depends on how the negotiations continue. The next round of talks between Lufthansa bosses and the union takes place on August 3rd and 4th.

Europe has been seeing several rounds of strike action across various industries due to inflation rocketing upwards, pushing up the cost of living.