Over the last few weeks, The Local has been reporting on the travel chaos that has been affecting flights to and from Germany. The renewed surge of passengers following the lifting of Covid restrictions, combined with airline staff shortages has led to thousands of flight cancellations.

Germany’s biggest airline, Lufthansa, has scrapped a total of more than 5,000 flights from its July and August schedules so far, while its subsidiary companies Eurowings and SWISS have also been forced to cancel hundreds of flights over the summer.

Are airports affected too?

Yes. Airports across Germany are continuing to struggle with severe staffing shortages in all areas from ground handling, to security staff and flight attendants.

As with the airlines, many workers lost their jobs or left the industry due to companies cutting back in the pandemic, and airports are now struggling to recruit employees to catch up with demand. Many skilled workers are now looking for or have found new jobs in other industries.

A Lufthansa spokesman told Bild am Sonntag this week that sickness rates among ground staff have also risen sharply in recent weeks, due to an increase in Covid infections. 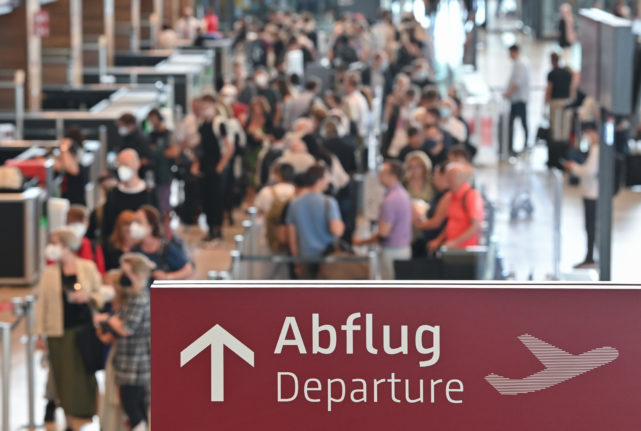 Travellers wait at a check-in for their departure from the capital’s airport Berlin Brandenburg (BER).
Photo: picture alliance/dpa | Patrick Pleul

Staff shortages at airports have led to chaotic scenes at airports including passengers queuing for hours for security checks and baggage handling problems.

Business Insider recently reported that 5,000 suitcases had been left uncollected at Frankfurt Airport alone and that many owner-less suitcases are being regularly transported by truck from various German airports to Munich.

According to the Bavarian Ministry of Transport, around 5,000 suitcases from a wide range of airlines are currently being stored at Munich Airport and have yet to be delivered to their owners.

Are there any solutions?

At the end of June, government ministers announced plans to recruit 2,000 seasonal workers from Turkey to help alleviate the strain on holiday air traffic. Germany’s Minister for Transport, Volker Wissing spoke about “energetic people who are now coming here and taking on these tasks.”

However, the security checks and skills requirements of these new workers are proving to be a significant hurdle.

Workers from Turkey have to show that they have been in full employment for the last five years, with no gaps of more than four weeks. They also have to be able to speak basic German and pass a test set by the air authority.

According to Thomas Richter, head of the employers’ association of ground handling service providers in air transport (ABL), most of the seasonal workers are not expected to be able to start in the industry until mid-August or early September.

By then, the summer holidays will mostly be over in most German states and the demand at the airports will not be so high.

Are the problems likely to continue?

Unfortunately, it looks likely that the problems will continue.

The head of Frankfurt Airport (Fraport), Stefan Schulte, told the Mannheimer Morgen newspaper that he expects issues at German airports to continue in the coming weeks. “The summer will remain difficult,” he said.

He added that the pent-up demand from air passengers had been underestimated: “We knew it was going to be a strong year, and we took that into account in our planning. But every forecast has been significantly outpaced, and many more people are flying than expected. The airports and airlines are understaffed at all levels for this.”

Schulte said it’s important to remember that “we’re coming out of the biggest crisis in aviation in decades”.

The German government, however, has been coming down hard on private companies in the aviation industry. Labour Minister Hubertus Heil recently said: “It is not acceptable for companies to create problems and dump that on the state’s doorstep, so to speak.” He added that the sector has to solve its staffing problem itself in the medium to long term.

Meanwhile, the problems will be exacerbated as more German schools finish up for the summer.

Germany’s largest airport – Frankfurt – is currently bracing itself for a particularly busy weekend from July 22nd to 24th, as this is when the school holidays begin in Hesse and Rhineland-Palatinate.