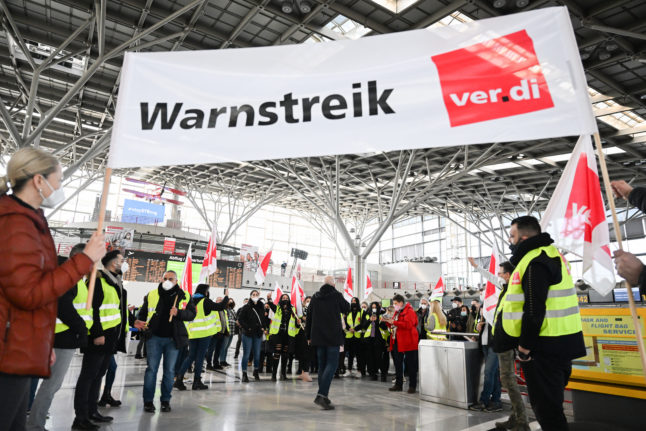 Members of the Ver.di trade union stand with flags and banners during an all-day warning strike in Stuttgart airport in March. Photo: picture alliance/dpa | Bernd Weißbrod

On top of the chaos that’s been plaguing German airports all summer, thanks to post-Covid staff shortages and spikes in passenger numbers, travellers in Germany will now also face strike disruption.

Trade Union Verdi has called on 20,000 ground staff employees – including technicians and logistics managers  – to take part in a one-day ‘warning strike’ on Wednesday, July 27th.

READ ALSO: EXPLAINED: How long will the flight chaos in Germany?

Ground staff will stop working at 3:45am on Wednesday and not resume until 6am on Thursday. As a result, Lufthansa passengers will have to prepare for “major flight cancellations and delays”, Verdi warned on Monday.

The background to the strike is the ongoing collective bargaining for employees at Lufthansa. Verdi is demanding a 9.5 percent wage increase, or at least €350 per month, as well as a minimum hourly wage of €13 for Lufthansa employees.

Vice chairwoman of Verdi and lead negotiator in the talks, Christine Behle, said that, in view of work overloads, high inflation and wage cuts over the last three years, the demand for wage increases is justified.

The union said that the management’s offer so far “does not come close to compensating for inflation” which stood at 7.6 percent in Germany last month.

Lufthansa ground staff “urgently need more money and they need relief, for themselves and for the passengers”, Behle said.

Behle asked passengers in Germany for understanding and pointed out the extremely difficult situation Lufthansa employees are currently facing, which, she claims, has mainly been caused by mismanagement.

She said that Verdi was announcing the strike in advance to give passengers a chance to prepare for it and to possibly make other arrangements.

There is currently a shortage of more than 7,000 employees in Germany’s aviation sector, the IW economic institute recently calculated.

The employees of the Lufthansa subsidiary were seeking a reduction in maximum flying time as well as an increase in rest periods, the Cockpit union (VC) said, adding current agreements had not been updated since 2015.

After several rounds of talks failed, “the only option left for us is to advance our demands via a labour dispute,” he said.

The union said it remained open to further talks. The strike at the low-cost German air carrier will last from midnight on Wednesday for 24 hours.

“We are open to talks about how we can achieve reasonable working hours for Eurowings employees in the long term,” added Marcel Gröls, chairman of the VC union bargaining committee.

So far, however, it has not been possible to agree on a common path with the employer, he said. “It’s not enough to sit at the negotiating table, you also have to bring the will to find solutions and not present counter-demands as an offer.”

The European aviation sector has been hit by a growing number of strikes in recent months among pilots, cabin crew and ground staff.

High inflation has triggered calls for pay hikes, while the sector also faces a shortage of workers after many jobs were cut during the coronavirus pandemic.

Lufthansa pilots agreed last month not to go on strike again until at least the end of June next year under a pay deal negotiated with the airline.

It comes after a summer of chaos due to staff shortages as travel picked up again when pandemic restrictions were loosened.