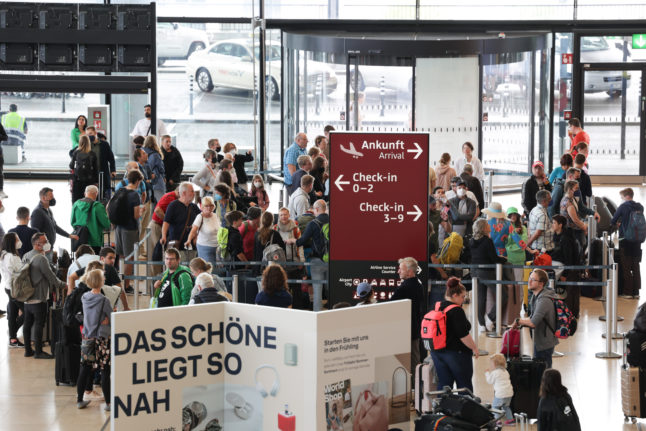 Whether it’s queuing for hours at security, flights being cancelled or luggage going missing, travelling by air in Germany has been nothing short of a nightmare.

And, although the aviation sector says there are signs that things could be easing off very slightly, weeks of disruption lie ahead.

“The situation is stabilising,” said head of the airport association ADV, Ralph Beisel. “The ad hoc measures introduced are having an effect.

“Nevertheless, we are not satisfied. The current conditions do not meet our demands.”

Beisel said improvements in the situation can only be expected from October, when the peak travel season is over. According to data collected by the Institute of the German Economy, airports are currently short of up to 7,000 skilled workers.

The German government said recently it would cut red tape to allow private companies to hire workers from abroad to ease the staffing problems.

In order to help the baggage-handling situation at German airports, up to 2,000 temporary employees are being sought from Turkey.

However, the relevant applications for staff background checks have not yet been submitted, various authorities at airports across Germany confirmed to Welt newspaper.

“As things stand, there are no applications here for potential employees from Turkey,” said a spokesman for the Frankfurt police headquarters.

Due to the pressure on airports, the aviation industry is urging authorities to carry out background checks as quickly as possible as soon as they arrive.

“A processing time of two weeks should be possible,” Beisel said.

But German authorities have rejected demands from the aviation industry to speed up background checks in view of the lack of personnel at airports.

“Simplifications or downgrading of the background checks are not possible,” said a spokeswoman of the Berlin-Brandenburg Higher Aviation Authority.

The employees of the Lufthansa subsidiary were seeking a reduction in maximum flying time as well as an increase in rest periods, the Cockpit union (VC) said, adding current agreements had not been updated since 2015.

After several rounds of talks failed, “the only option left for us is to advance our demands via a labour dispute,” he said.

The union said it remained open to further talks. The strike at the low-cost German air carrier will last from midnight on Wednesday for 24 hours.

“We are open to talks about how we can achieve reasonable working hours for Eurowings employees in the long term,” added Marcel Gröls, chairman of the VC union bargaining committee.

So far, however, it has not been possible to agree on a common path with the employer, he said. “It’s not enough to sit at the negotiating table, you also have to bring the will to find solutions and not present counter-demands as an offer.”

The European aviation sector has been hit by a growing number of strikes in recent months among pilots, cabin crew and ground staff.

High inflation has triggered calls for pay hikes, while the sector also faces a shortage of workers after many jobs were cut during the coronavirus pandemic.

Lufthansa pilots agreed last month not to go on strike again until at least the end of June next year under a pay deal negotiated with the airline.

It comes after a summer of chaos due to staff shortages as travel picked up again when pandemic restrictions were loosened.