Can Germany cope with the influx of refugees from war-torn Ukraine?

Since the start of Russia's brutal war on Ukraine, more than 240,000 refugees have registered in Germany. The government has vowed to help, but local authorities, volunteers and refugees are struggling with bureaucracy and a lack of organisation.

When Chancellor Olaf Scholz told the Bundestag last Wednesday that "refugees are welcome" in Germany it echoed the message his predecessor Angela Merkel issued more than five years ago at the height of the 2015 Syrian refugee crisis: Wir schaffen das - we'll manage it.

Yet since Russian President Vladimir Putin invaded Ukraine on February 24th, forcing millions to flee their homes, it's clear that German authorities and charities are struggling to cope with thousands of arrivals every day.

Although the war on Ukraine is a different challenge, the bureaucratic issues are similar to 2015: how can refugees register in Germany and get financial support set up quickly? How can authorities ensure shelter and safety; get children into schools and people into work?

Locals across Germany have opened up their homes to people - but both the refugees and volunteers have spoken about their struggle to find information and after getting to the safety of Germany’s borders - and have urged authorities to slash red tape.

Journey into the unknown

One of the hundreds of Berlin hosts to bring Ukrainians into their homes is Australian Marcus Wongyai. He took in Yiliena, Viktor and Mikhailo on March 3rd. They are three of around 246,000 refugees from war-torn Ukraine who have registered in Germany up to March 26th.

The Ukrainian family opened up to The Local Germany about the nightmare that forced them to fill up their car with petrol and make a run for Poland on February 28th.

“We were very afraid for my father who fell into a diabetic coma as we did not have the insulin for him,” said Yiliena. who did not want to use her surname for fear of Russian reprisal. “The Russians bombed the TV station next to my home and all the pharmacies and hospitals were closed for military use,” she adds.

Along with her husband Viktor, she got her 87-year-old father Mikhailo into a car and drove west towards Poland, but it was not before they had a brush with death. “As we left Kyiv, we saw the Russians dropping bombs on the Stoyanka bridge we had just crossed,” Yiliena explained.

The trio then made their way to the Polish border where a German doctor of Ukrainian descent put them in touch with their host couple in Berlin.  He gave them enough money to fill their tank with petrol and drive across Poland because no-one was changing Ukrainian currency to euros. 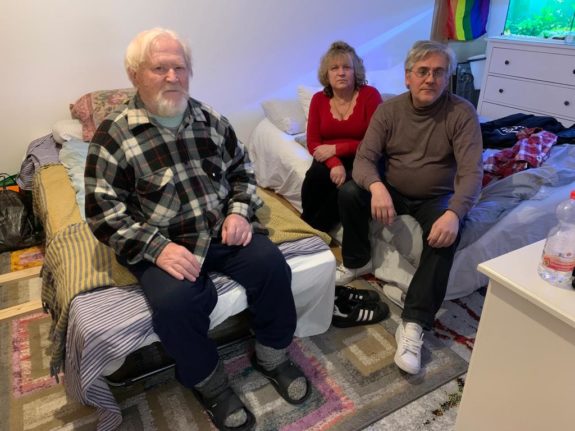 From left to right, Mikhailo, Yiliena and Viktor try to relax at their makeshift home in Berlin. Photo: John Culatto

Even though Yiliena and Viktor, both 62, are a relatively well-off middle class couple, the Russian invasion has stripped them of everything. “Our money is worth nothing and we cannot take our savings out of ATMs,” Yiliena said, adding that she was desperate to stand on her own two feet again.

Their host Marcus, who has lived in Berlin for three years and runs an international medical software company, said he was appalled at how little help was available for the newly arrived Ukrainians, having been sent from one government department to another in his search.

“The Berlin authorities really seem to be doing all they can, but they do not seem to be supported by the central German government,” he told The Local.

Berlin has received about half of the refugees that have entered Germany in the first month of the Russian war on Ukraine. Franziska Giffey, the German capital’s mayor, said recently that the city is “at the limits of our capacities".

Refugees arriving at the former Tegel airport's welcome centre are now likely to be distributed around the country to ease some of the pressure on the capital so it can better manage the strain on infrastructure like schools.

Berlin charities have taken on board the lessons of the Syrian refugee crisis. “We have to reactivate the network from 2015,” said Holger Michel, of Freiwillige Helfen, which arranges volunteers welcoming Ukrainians at train stations and refugee centres. He said that of the refugees coming from Ukraine, 20 percent are children and some of them are arriving alone, making the operation even tougher.

Another Ukrainian refugee, Olena, escaped Kyiv in early March with her one-year-old son soon after the Russian attack started. She has been staying with a friend in Berlin for three weeks, and is hoping for support to come through soon. 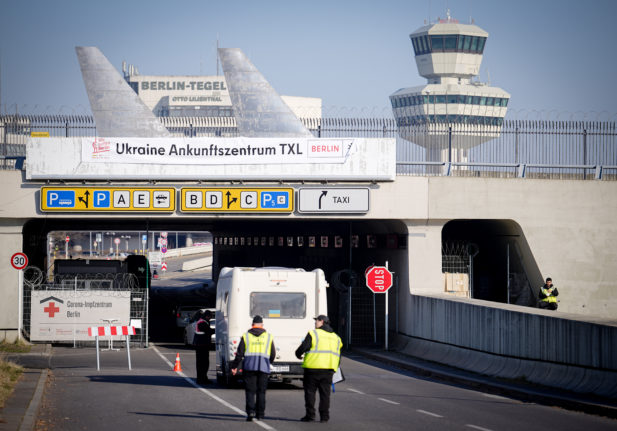 “My friends bought food and nappies for my baby and I also received humanitarian aid from local volunteers,” Olena told The Local Germany. “On March 16th, I went to the social services to get medical insurance and social benefits, but so far I have not received anything. However, they promised to pay the money soon and send the insurance by post.”

Last week, the former journalist whose husband is still fighting Russian troops back in Ukraine, finally got her job permit. While admitting it has sometimes been a struggle, she said Germany is "doing enough for Ukrainians".

"The only problem is the long queues,” she said. “Many people need help and all of them turn to social services. With a small child it is very difficult to stand in line. It is very exhausting and it takes a lot of time.”

What is the German government doing for refugees?

In response to the crisis, the German federal government said it would provide Ukrainians with “a residence permit for temporary protection" which can be obtained from an immigration office. This means they do not have to go through the lengthy asylum process that other refugees endure.

"They will simply present their documents to say that they’re Ukrainian citizens… together with an ID and first registration, and they are entitled to social assistance, housing and the health care system,” a spokesman for the German Office of Refugees told The Local Germany.

"At the same moment and also as a huge difference when compared with the asylum seekers... they are immediately able to pick up any kind of job," he said.

Lagenbach explained that the German state is acquiring "various state-run houses, container villages, hotels and hospitals" to give homes to refugees. This effort is occurring despite the low availability of accommodation in locations like Berlin, with the goal being to distribute refugees across the country more evenly. 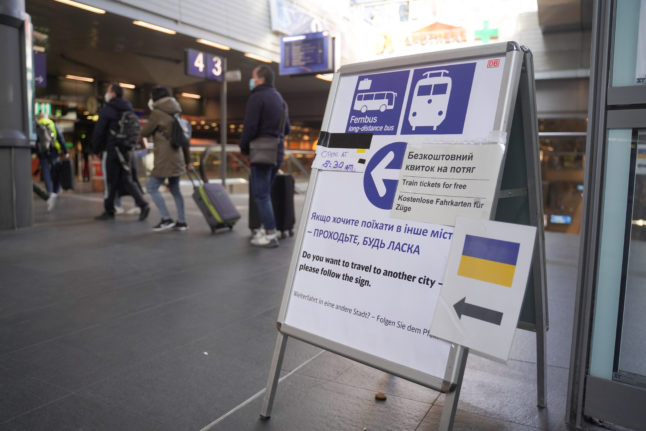 “Once they live within our shelters, they will get breakfast, lunch and dinner, as well as basic sanitary provision in addition to their state payments. When it comes to cash, there were Ukrainian citizens applying to local district social welfare administrations and as far as I know, this was granted, but they were not huge amounts of money."

Despite easing the processes, authorities have faced criticism.

“It should be possible to apply for a residence permit quickly in every federal state,” lawyer Olga Klus of the Fair Integration project told The Zeit German newspaper. “I very much hope that it will now be as easy as possible for the refugees to find a job without cumbersome administrative procedures,” she added.

Host Marcus said that the refugee family he was supporting find computer access difficult and getting an appointment at a Bürgeramt council office even harder. He also slammed authorities for taking too long to provide financial support. He suggested that as “the second most powerful Western economy,” Germany could “give pre-paid coupons for refugees to use at supermarkets".

Until April, Ukrainians like Viktor, Yiliena and Mikhailo will remain with Marcus who will be paying for them. For now they are just happy to be safe in Berlin, but unsure of their future and that of their country.

Viktor, a computer manufacturer, and Yilena, an accountant, would love to work for their keep but their inability to speak German and have their qualifications verified will make it hard.

“Now we want the German government to refund people like Marcus who helped us and allow us to get to work," said Yiliena.

Olena is happy to have got a job quickly and now wants to learn German. Yet she misses her husband and is looking forward to the day she can return home to a peaceful Ukraine.

But with peace still a distant uncertainty, Germany will likely be pushed to its limits as it attempts to support the some 250,000 Ukrainian refugees who have already entered across its borders - and the hundreds of thousands that may in the coming months.

These are larger figures in a shorter amount of time than even at the height of the refugee crisis in 2015. But the question many people are asking is the same: will they manage it?