Whether you're sending socks to a friend in London, or a Christmas wish list to Santa at the North Pole - here's what you need to know about sending packages from Germany this Christmas.

Don't leave it to the last minute

In the weeks leading up to Christmas, parcel delivery services in Germany will be in full swing. According to the Federal Association of Parcel and Express Logistics (BIEK) there will be around 20 million shipments a day over the Christmas period.

Therefore all major postal services recommend that their customers send off their standard shipments as early as possible. If you want to be absolutely sure that your parcel will arrive on time before the festive season, you shouldn't wait until the last day.

There are numerous postal services operating in Germany and their delivery prices differ. Some services calculate the price for a package by weight, while others do this by size. So if, for example, you're sending a small, heavy gift, a different provider may be cheaper than if you're sending a large, light box.

Franking your shipment online and printing out your own parcel label can also save you money. Some companies pick up parcels from home on request - but this costs a few euros extra. Comparison websites, such as Paketda and Packlink can help you find the cheapest rates.

Deutsche Post offices can get very full just before Christmas, but many smaller stores also accept parcels on behalf of DHL. Queues and waiting times are usually shorter in smaller shops and customers can find drop-off points near them on the DHL website. Hermes and DPD also offer a dense network of acceptance points, mostly small stores, kiosks or petrol stations, especially in cities.

Make sure you've packaged everything correctly

To make sure your gifts arrive safely, make sure the address is correct and visible. Don't forget to remove any old barcodes from previous packages and avoid the temptation to decorate the postal package with bows or decorations, as these can get tangled in sorting machines and tear the packages. 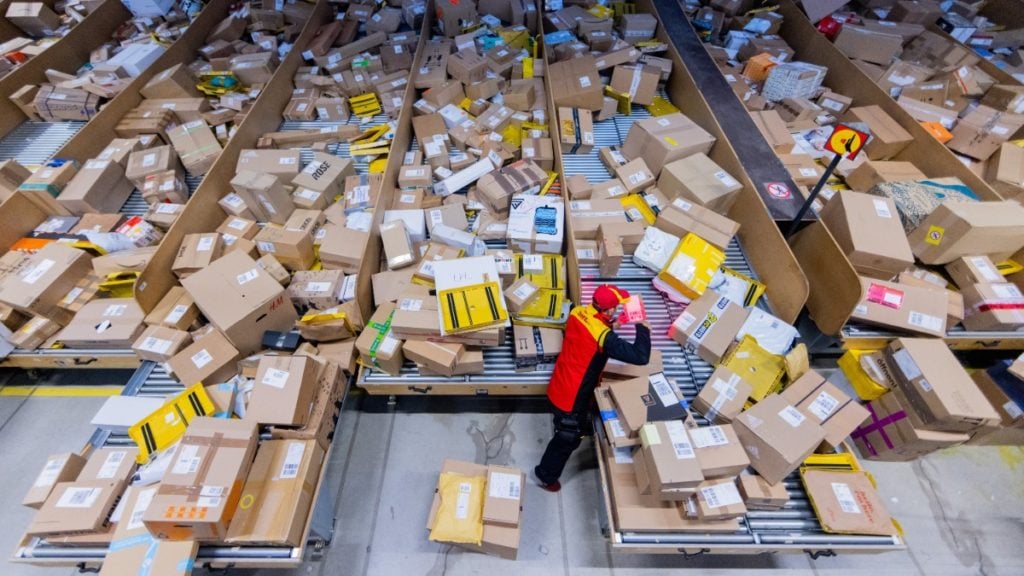 A parcel deliverer sorts and clears parcels into a delivery vehicle at a Deutsche Post DHL delivery base. Photo: picture alliance/dpa | Rolf Vennenbernd

If you're sending packages to the UK, you will have to fill out an extra customs declaration form. You can find out everything you need to know about sending parcels to the UK here.

READ ALSO: Christmas travel between Germany and the UK: What am I allowed in my suitcase?

All the major postal services have specific deadlines for different destinations, which we have listed below. Bear in mind that delivery times could be subject to delays in the destination country.

Christmas cards, letters and postcards being sent within Germany need to be sent before the mailbox is emptied (this is usually written on the postbox) on December 22nd if you want them to reach their destination by December 24th. For parcels, the deadline is earlier: they should be posted by December 20th.

Shipments to Germany's neighbouring countries of Denmark, Poland, Czech Republic, Switzerland, Belgium, Luxemburg and Austria must be on their way by December 15th and packages to France and Italy must be sent by December 14th. For all other European countries (including the UK), the deadline is December 12th for normal shipping and 13th for premium shipping.

Anyone wishing to send a parcel to a recipient outside Europe needs to get their package sent much earlier. The normal shipping deadline of November 29th has passed but, for an additional charge, packages can still be sent by Tuesday, December 6th.

DPD promises to deliver domestic parcels by Christmas Eve if they are handed into the parcel shop by 12 pm on December 21st at the latest. For the Prio and Express variants, the latest delivery date is December 23rd, also at 12 pm. For shipments to other European countries, the deadline is December 17th at 12 pm.

For shipping outside of Europe, you can find the latest possible shipping time using the transit time calculator on the DPD website.

Hermes aims to deliver shipments within Germany before Christmas if they are handed in by 12 pm on December 21st. The last date for shipments to other EU countries varies between December 12th (for packages to Greece, for example) and December 20th (for packages to Austria), depending on the destination country. A detailed overview can be found on the parcel service's website.

Parcels without an express option should be posted by 12 pm on December 20th at the latest in order to be delivered within Germany by Christmas Eve.

With the express option, the parcel can also be delivered on December 22nd until 6pm and, for those who have left it to the very last minute, UPS Express Saturday Delivery parcels can be sent until 6pm on December 23rd.

For standard shipping within Europe, delivery times for packages range from 1 day (to Austria and Italy for example) to more than 3 days (to the UK, Spain and Portugal). Packages picked up by Monday, December 19th at 6pm, will usually arrive by Saturday, December 24th.

You can find out more precise delivery times and costs can be determined using the delivery calculator on the UPS website.

honeybeejenny 2022/12/10 10:29
I mail my partner boxes from the US to Germany for special occasions. I complete the US customs forms honestly and accurately regarding the value of said items. However, he must pay additional upon delivery. The last times have been between 16-21 euro. Does anyone know why this is?