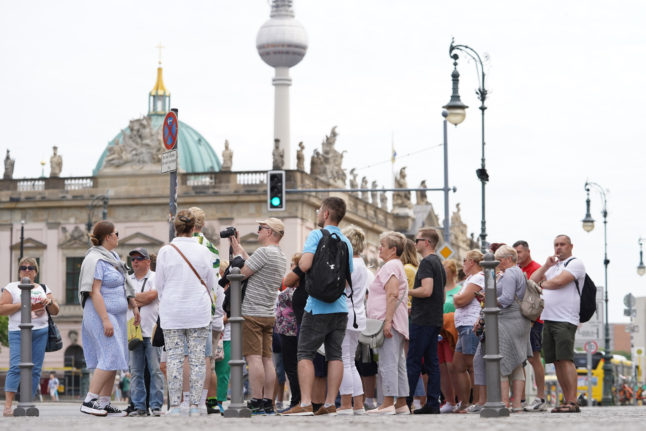 Germany is seeing a steep rise in Covid infections at the moment due to the spread of two highly infectious Omicron subtypes: BA.4 and BA.5. As of Wednesday July 13th, the 7-day incidence of infections stood at 691.8 per 100,000 people.

Can I travel to Germany?

Yes. Germany has lifted most of its Covid entry restrictions which means that people can enter from almost all countries in the world for any reason, including tourism.

Travellers over the age of 12 also no longer have to show evidence of vaccination, recovery from Covid or a negative test (known as the 3G rule). This requirement has been dropped until at least the end of August.

There is also no need to fill in any online forms.

However, if a country is in future classed as a ‘virus variant’ region then stricter rules come into force. In these cases, non-essential travel is banned except for some exceptions such as for German citizens and residents.

Those who can enter the country have to go into a 14-day quarantine on arrival, even if they have been vaccinated or have recovered.

No country is a virus variant area currently.

Travel rules could be reinstated after summer or if the Covid situation gets worse so keep an eye on any developments.

Are there any Covid restrictions in Germany?

Although much of the rules have been relaxed in recent months, some restrictions remain in place. These include having to wear surgical face masks on public transport, like buses, trains and trams, as well as planes to and from Germany. Masks also have to be worn in places like doctor office waiting rooms.

FFP2 masks have become the standard in Germany, but in some cases, other medical masks are sufficient. In Bavaria, for instance, people can wear a cheaper medical mask rather than an FFP2 mask on public transport. Cloth masks are generally not sufficient in Germany.

Masks don’t have to be worn in places like shops and restaurants, however, some businesses might have their own rules requiring this.  People can also choose to wear masks voluntarily. 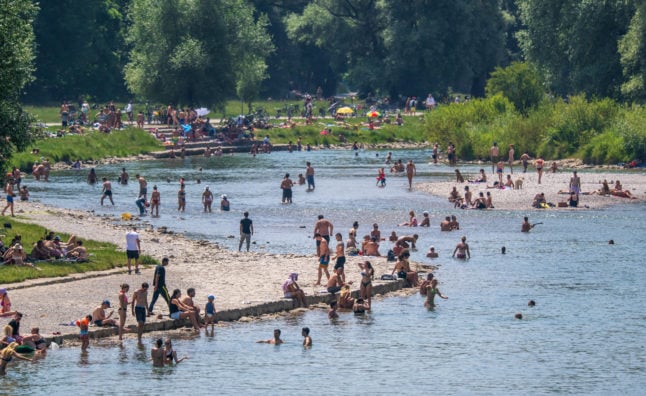 Can I get tested?

Germany recently changed its testing restrictions. Taxpayer-funded rapid Covid-19 tests are no longer free of charge to everyone, however they are free to certain groups of people, including those who can’t get vaccinated against Covid for medical reasons as well as carers and people with disabilities.

People have to show proof of their exception at test centres, which are dotted around German cities and towns. They usually have a sign outside them that reads: Covid tests, Bürgertests (citizen tests) or Schnelltests (rapid tests). Furthermore, people in Germany can pay a reduced fee of €3 for a test for private use, including for visits to family celebrations, concerts or another “indoor event”, such as the theatre.

A €3 test can also be purchased by anyone who gets a red Covid warning on their Covid warning app, or who plans to meet someone over the age of 60 or people with a pre-existing illness or disability. You have to sign a declaration form if you’re getting a test for one of these reasons.

READ ALSO: The new rules on getting a Covid test in Germany

You can also pay to get tested at a centre or test station. The cost of tests differ depending on the centre. You can also buy self-administered tests from a drugstore or supermarket.

What do I do if I have Covid?

If you receive a positive Covid test result through a self-test, you should contact the non-emergency medical on-call service on 116 117 or the local health authorities where you are. They can advise on whether you should get another Covid test.

If you have Covid symptoms you should also isolate and contact the health authorities or use the on-call number. They can arrange for a Covid-19 test.

If at any point you are struggling to breathe or need emergency medical assistance, call 112 for an ambulance.

Do I have to isolate if I get Covid?

Yes, Germany still has mandatory isolation rules in place. The rules on this differ from state to state, but there is one general requirement: those who test positive for Covid have to go into isolation at home and avoid all contact with people outside the household. The isolation period lasts at least five days or a maximum of 10 days.

Some states may require you to take a test in order to end your quarantine or self-isolation early. In this case, you’re entitled to a free rapid test anytime after the fifth day. If the result is negative, you can end the self-isolation period.

Where can I self-isolate?

That will depend. You might be able to stay in your existing accommodation or have to transfer to a state hospital or other government-provided accommodation. Check with the local authorities.

You may need to fund accommodation, even if it just to extend your hotel stay.

What if I need treatment?

If you are an EU citizen, your country’s healthcare can cover state treatments. It’s similar if you are a UK citizen and hold an EHIC or GHIC. The e-card, European health card, EHIC or GHIC will not cover private treatments, though.

If you are a third-country citizen, you must check exactly what your travel insurance covers. In general, people travelling to Europe from abroad are recommended to have travel insurance that covers medical treatments, and you might also be insured through a credit or debit card. It’s worth checking and planning before you travel.

Sites like Doctolib are handy for arranging doctor appointments in Germany. Your hotel will also be able to advise you of a nearby Hausarzt (GP), or you can search online.

The German government has set up this page in English with information for travellers. It includes links to the 16 federal states so you can find information on the state you are in or travelling to. 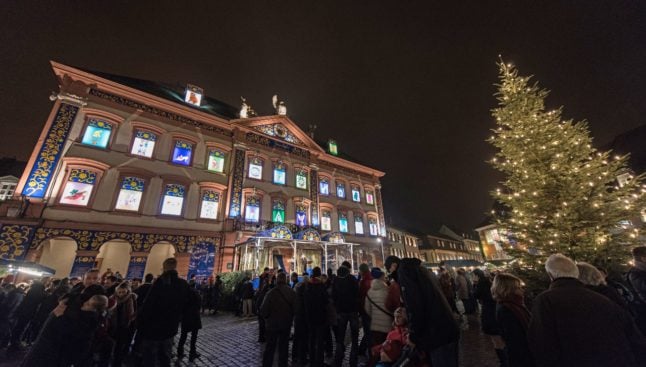 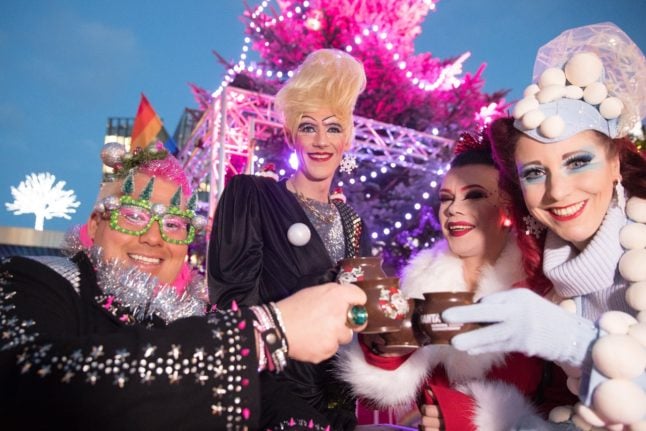 If you have a sweet tooth, then you don’t want to miss Germany’s largest chocolate festival in Tübingen, southwest Germany.

The open-air market in the Old Town offers chocolate delicacies from around the world as more than 100 top international chocolatiers and manufacturers from Africa, South and North America and Europe present their wares. 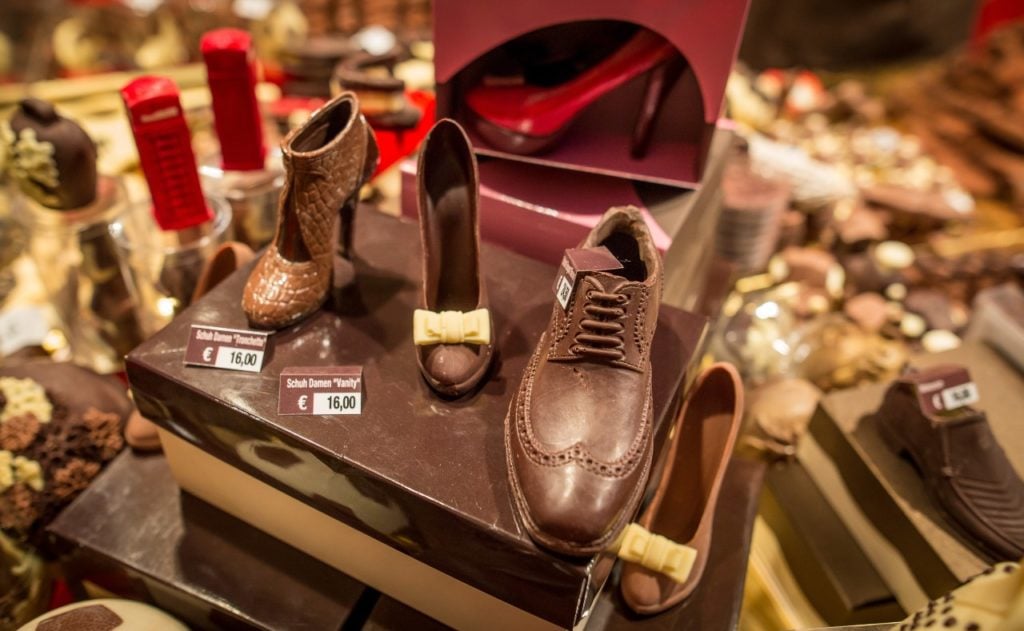 Entry is free, meaning you can spend more money on the tasty delights on offer.

The Cologne Christmas Circus is returning to its magnificently decorated palace tent at the Messekreiselfor in Köln for its seventh year this December.

More than 40 artists from all over the world will put on a dazzling show of daring feats, acrobatics, ballet and classical circus acts in a two-and-a-half-hour show for the whole family.

Similarly, the Roncalli Christmas Circus will return to Berlin’s Tempodrom this year, from December 17th to January 2nd. 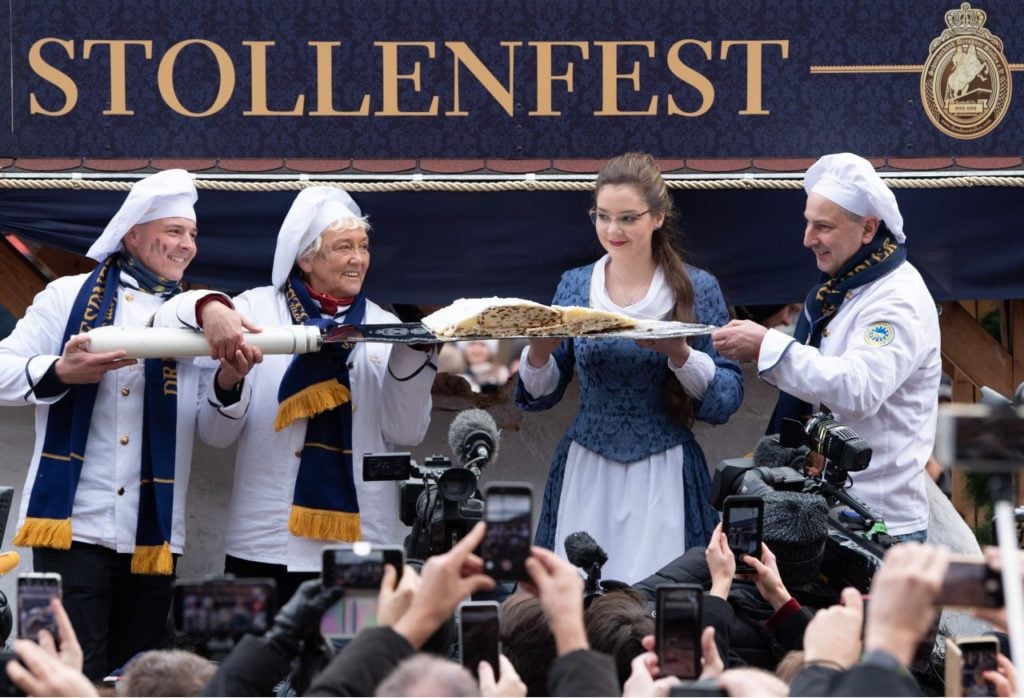 Veronika Weber, the 25th Dresden Stollen Girl, and the bakers of the Schutzgemeinschaft Dresdner Stollen present the first piece of the giant Stollen at the Striezelmarkt for the 26th Dresden Stollen Festival in 2019. Photo: picture alliance/dpa/dpa-Zentralbild | Sebastian Kahnert

The people of Dresden take things pretty seriously when it comes to Stollen – a German fruit bread coated in sugar and traditionally eaten at Christmas. So much so, every year, the city celebrates Stollenfest on the second Saturday of Advent.

A special attraction this year will be the show bakery at the Striezelmarkt, where Dresden Christmas Stollen will be baked live in front of an audience. There will also be the traditional parade, led by the Dresden Stollen Girl as the representative of the Dresden Christstollen brand and patron of the festival. Sadly, there will be no giant Stollen featuring in the parade this year, but instead, 588 copies of a special edition one-kilo Stollen will be auctioned.

With its 24 windows, the Rathaus (town hall) in the town of Gengenbach, Baden Wurttemberg is transformed into the world’s largest advent calendar.

Up to 120,000 visitors descend on the town every year to watch the ritual of the window opening – as each evening a new artwork is unveiled in one of the backlit windows. The unique spectacle is accompanied by music and games, and visitors can also take a stroll through the Advent market and to the Museum Haus Löwenberg, where exhibitions are presented to match the artworks in the Advent calendar.

If you want to see a centuries-old German tradition in action, then make sure you go to the Krampus run in Munich on December 11th. 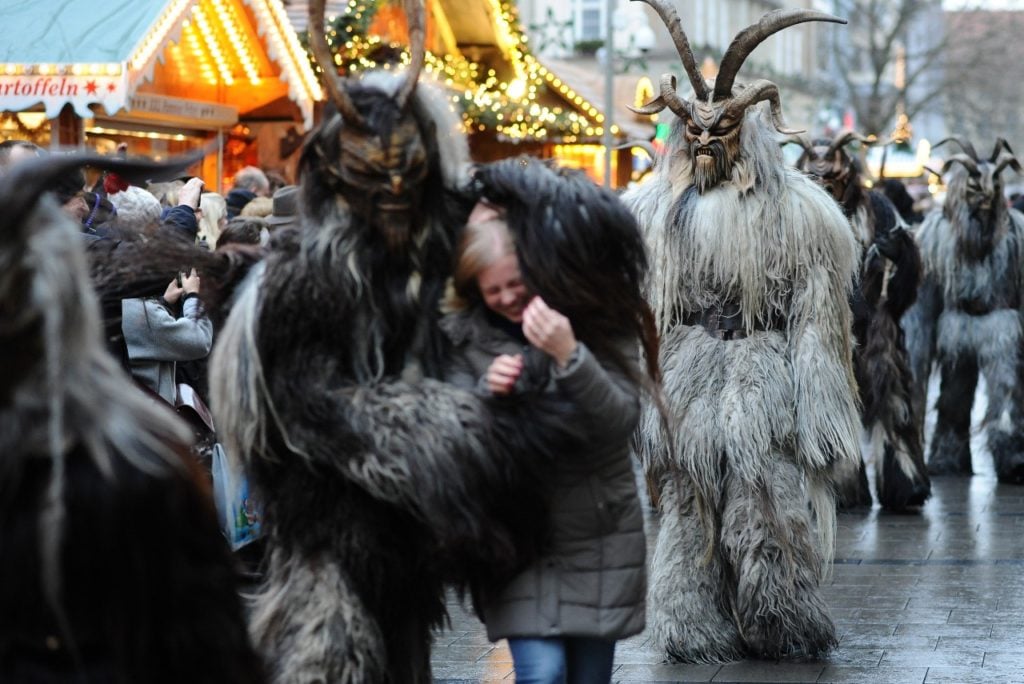 A Krampus holds a woman during the traditional Krampus run at the Christkindlmarkt in Munich in 2016. Photo: picture alliance / Andreas Gebert/dpa | Andreas Gebert

Niklaus – the feast of St. Nicholas, is celebrated all over Germany on December 6th, but in many regions in the south of the country, the evil Krampus figure comes out to punish naughty children the evening before.

Many towns and cities have a Krampuslauf – a Krampus run – in which performers dressed in scary costumes with carved wooden masks, huge horns and long hair parade through the streets.

The most famous of these takes place in the Munich Christmas Market in Marienplatz and, this year will take place from 3 pm to 5 pm on December 11th. The Krampus and his entourage might look scary, but the parade is actually a lot of fun.

No list of things to do in December in Germany would be complete without a mention of Christmas markets – and this year, there are around 3000 taking place up and down the country, from late November to the end of December.

Some highlights include the Aachen Christmas market – where the air is filled with the scent of mulled wine and Aachener Printen – a special type of gingerbread. For the four weeks before Christmas, the squares and lanes around Aachen Cathedral and the town hall are transformed into a Christmas village.

The Christmas Market in Mainz, Rhineland-Palatinate, is another highlight. Set against the historic backdrop of the 1000-year-old St. Martin’s Cathedral, the Mainz Christmas Market has been shining with festively decorated stalls for over 200 years. The colourful Renaissance facades of the historic market houses are particularly beautiful to see at this time of year. 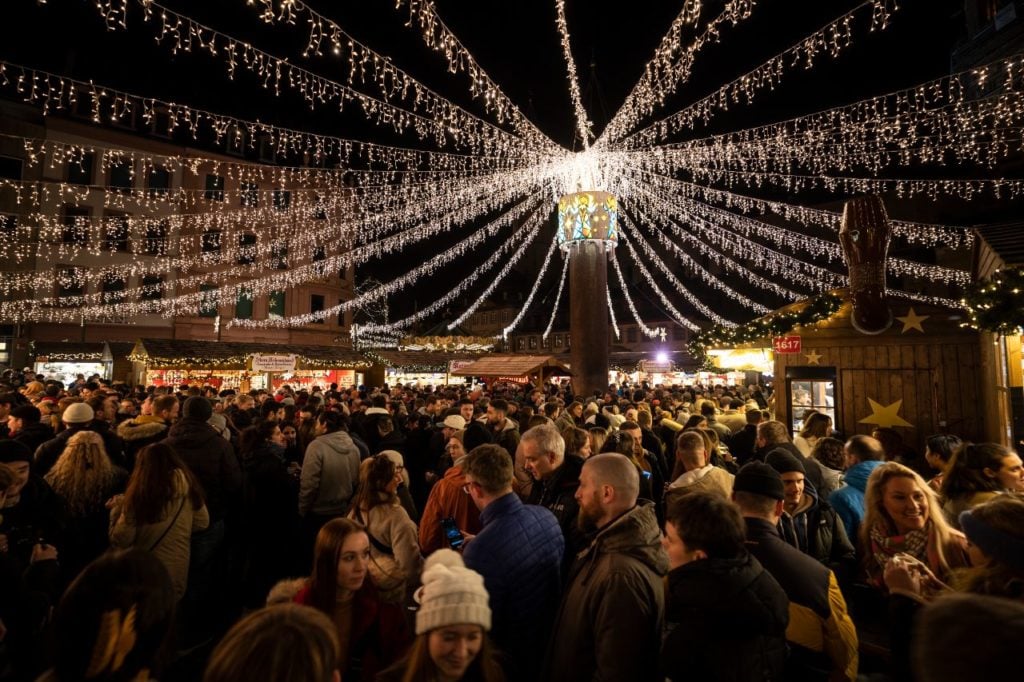 You can read about more of our top Christmas market picks for 2022 here:

Nothing can get you in the mood for Christmas quite like a Christmas Carol concert and there are plenty to choose from up and down the country.

On December 18th, the Düsseldorf Police Choir puts on a mix of traditional, classical and modern Christmas music in its traditional Christmas concert at the Tonhalle in Düsseldorf.

On December 22nd, the Berlin Rundfunk Choir will put on a special programme of Christmas choral works from Ukraine in the Berlin Cathedral.

After two years of Covid, New Year’s Eve in Germany is set to be back with a bang this December – especially as the ban on fireworks will be lifted.

However, the New Year’s Eve party at Berlin’s Brandenburg Gate will take place without fireworks this year – instead, there will be light projections made with the help of the producers of the “Festival of Lights”. 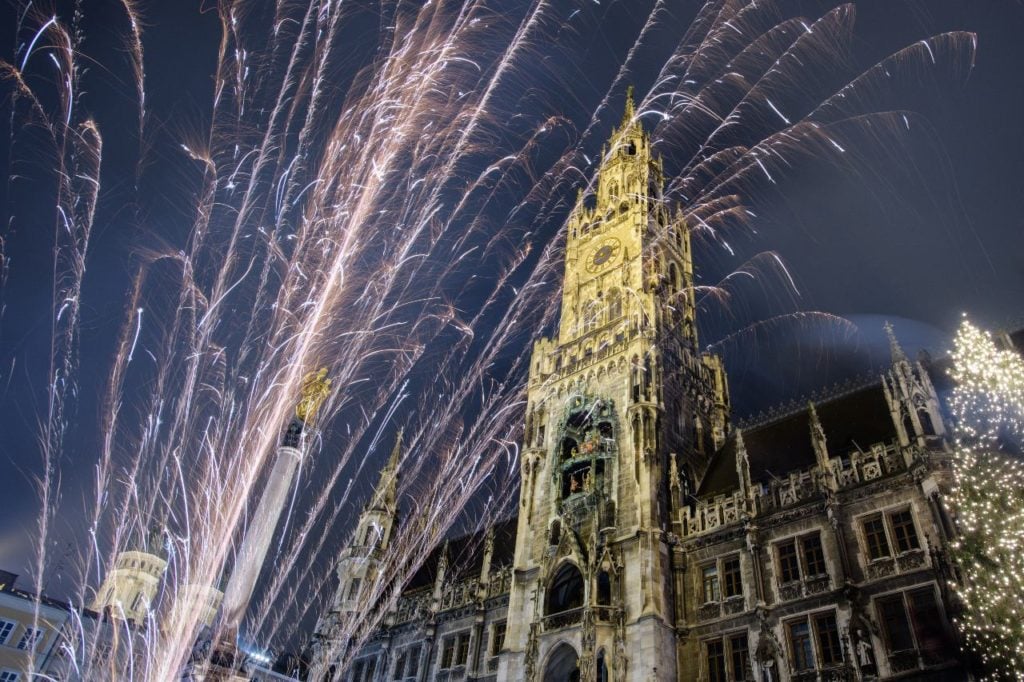 The number of visitors has also been limited, and only around 2,400 people will be able to attend with a pre-booked ticket. These will gon on sale on December 1st.

Fireworks are set to make a return at the public celebrations in Munich this year and can be seen from Olympiaberg, Friedensengel and Marienplatz. The Tollwood New Year’s Eve party, which starts at 7 pm, has live music performances.

Public fireworks displays will also be in Stuttgart and on the Islands of Usedom and Rügen this year.