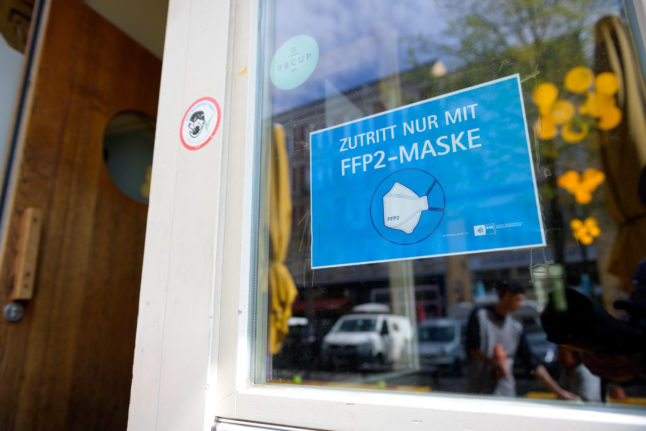 A sign telling customers to wear an FFP2 mask at a shop in Hamburg in April. Photo: picture alliance/dpa | Jonas Walzberg

As fears grow over the spread of Covid, four states – Baden-Württemberg, Bavaria, Hesse and North Rhine-Westphalia – are urging the federal government to create the legal conditions that would enable restrictions after summer.

The Infection Protection Act, which allows for measures like mandatory masks on public transport, is due to expire on September 23rd.

The coalition government – made up of the Social Democrats (SPD), Greens and Free Democrats (FDP) – should present an amendment to the law before the summer break, according to a draft resolution by the four states ahead of a health ministers meeting this week.

This is needed so authorities can react with restrictions against an increase in infections in autumn, the draft said.

Germany had a series of tough measures during the autumn and winter of 2021/22, including the 3G rule, which meant people had to show proof of vaccination, recovery or a negative test to enter a public venue like a restaurant. The 2G rule excluded unvaccinated people from entry to many places, while 2G-plus meant that vaccinated people needed to show a negative test unless they were boosted.

The three CDU/CSU-led states and the Green/CDU governed state of Baden-Württemberg also insist that they be included in the deliberations on the law.

The health ministers of the four states also demand that the Corona Test Ordinance be extended “appropriately” beyond the end of June.

“There is a need for continued free and unbureaucratic testing opportunities, especially to ensure protection around facilities for vulnerable persons and groups,” said the proposal.

Ahead of the health ministers’ conference in Magdeburg starting on Wednesday, the states are also pushing for clarification on whether there should be a general recommendation for a fourth vaccination for everyone in Germany.

The Standing Commission on Vaccination (STIKO) has so far only recommended a second booster shot for people over the age of 70.

The government should also plan together with the states on how jabs should be given out in autumn and winter, said the states.

Baden-Württemberg, Bavaria, Hesse and North Rhine-Westphalia also call on the federal government to equip hospitals for the expected next wave.

There should be financial incentives, for instance, to retain staff and recruit new ones. “There must also be a renewed prospect of financial security for hospitals through federal rescue funds, should the supply situation in hospitals come to a head again,” said the proposal.

German Health Minister Karl Lauterbach (SPD) has said that his department is already working on a strategy for autumn that will include changes to the infection protection laws.

READ ALSO: How Germany is preparing for a post-summer Covid wave

“We must not go into the crisis unprepared again like last autumn,” Lauterbach told the Bundestag earlier in June. “We must be well prepared.”