OPINION: Scholz is already out of step with Germany - it's time for a change of course

Olaf Scholz has seen his popularity ratings plummet in Germany amid the Ukraine crisis. After a promising start, the Chancellor has retreated into Merkel-era habits that no longer match the country he is leading, writes Brian Melican.

Contrary to what many commentators are saying, what’s most surprising about Olaf Scholz’ precipitous fall in popularity is not how quickly it has happened – but rather how slowly.

Both among German voters and our allies abroad, Scholz had, until very recently, been given the benefit of the doubt to a very generous extent. After all, it would be simply unrealistic to expect him to magic away in six months Germany’s sixteen years of accumulated backlogs: a stalled green energy transition, the chronic unattractiveness of public service jobs, potentially crippling overdependence on strategic rivals Russia and China…

No one expected any of this to get solved overnight, and at least it looked like Scholz and his coalition were making a good start. So there was a huge amount of goodwill.

In what seems like an eternity ago, back in early February when the Ukraine war was still a “Ukraine crisis”, Joe Biden welcomed Olaf Scholz on his first official visit to the White House and, despite the fact our Chancellor refused to make clear that Nord Stream 2 would be cancelled if Russia invaded Ukraine, called Germany a “reliable partner” and did his best to keep his frustration in check.

It was sensible, grown-up politics: instead of trying to strongman Scholz with a public shaming, Biden worked behind closed doors to get him on side. Most of Germany’s allies, despite increasing exasperation with our shilly-shallying, did likewise.

'Man of the hour'

This approach paid off: in his Zeitenwende speech in early March, Scholz appeared very much the man of hour, cementing the impression I and many others have of him as someone who, while not wholly devoid of dogmatism, is nonetheless willing to change positions in the face of good arguments. Russia’s invasion of the Ukraine led him to reassess his stance to date, find it wanting, and correct it accordingly.

His honesty and solemn undertaking were rewarded with plaudits from our allies – and with an unexpected bounce in popularity among voters who, it turns out, had also been doing some thinking and had overcome their long-held distaste for military matters.

Yet it’s been downhill from there on in. Essentially, Scholz’ speech wrote a hefty cheque that his actions since have not cashed. In the far-reaching nature of the foreign and defence policy shift he announced, Scholz displayed the strong leadership which he prides himself on delivering, only to then lose the courage of his own convictions.

Instead of using the momentum his volte face gave him to grasp the bull by the horns, he shrank back from any immediate measures which might prove too radical: no heavy weapons for the Ukraine; no embargo on Russian gas; not even any further major speeches. Yes, Germany has changed its stance and yes, Germany is supplying Ukrainian forces with much-needed material. Yet the overall impression – not just among Ukrainians, but among our allies and even the general public – is that it is still too little, too late and that, as ever, Germany is reacting in a sluggishly over-bureaucratic manner. The result is widespread dissatisfaction with Scholz’ government and, naturally, with Scholz himself.

In Scholz’ inability to make good on his pledge, there are three factors at play. One of them is beyond his control; the other two are of his own making.

READ ALSO: OPINION: How many massacres will it take before Germany turns off Russian gas?

Firstly, Scholz is hamstrung by circumstances. Even those of us in favour of supplying heavy weapons to the Ukraine have to accept the damning assessment of every informed professional who has examined the Bundeswehr in recent years: our own forces are operating on a bare minimum. This severely limits what we can offer. And this inability to defend even ourselves, let alone our European allies, has been twenty years in the making. The same is true of Russian gas: while I argue for an immediate embargo, I do not deny that this would have serious effects on our economy and society – and that, here too, there is no magic wand that can be waved over two decades of criminally negligent energy policy.

This is the situation we are now in. How we got here, however, throws an unflattering light on Scholz, who was, until he became Chancellor, Finance Minister in yet another Merkel administration which allowed defence budgets to remain below par, Bundeswehr procurement to go to pot, and our dependency on Russian gas to go from around 40 percent to 55 percent.

This is the second factor in Scholz’ current failure: although he has, commendably, identified past mistakes and promised a different approach, he is still proving unable to surmount his own habits and instincts. Even where other options would now be open, Scholz is still applying the methods of the Merkel years – delaying, delegating down to committees, and hoping problems solve themselves – in circumstances which he himself has publicly identified as radically different.

Here, the issue with the Marder IFVs is symptomatic: Rheinmetall has literally dozens of these armed people carriers sitting around which could be refurbished at relatively short notice, either to be sent directly to Ukrainian forces or cascaded down to the Bundeswehr to replace any supplied to Kyiv.

Scholz is sticking to the unconvincing line that Ukrainian soldiers couldn’t be trained to use them in time - in spite of the obvious fact that the country’s forces have already lasted longer than anyone thought they would and that the war is now clearly going to drag on. Zeitenwende politics this is not. I’m not alone in expecting proactive executive action here: Scholz has a problem when MPs in his own coalition generally well-disposed towards him such as Marie-Agnes Strack-Zimmerman repeatedly take to the airwaves to denounce his “prevarication”.

And that is the third factor at play here. Regardless of actions taken or not taken, in stylistic terms, Scholz is not living up to his own hype. This is what, in my view, is denting his popularity the most. No one is expecting miracles, but having come to power implicitly promising to explain and justify his policies more than his predecessor Angela Merkel – who preferred to preside, sphynx-like, over proceedings – Scholz has now, after a promisingly communicative start, retreated back into the Chancellery. His silence, both on the Ukraine and on other pressing issues (especially Covid policy) is leaving too much room for interpretation – and dissatisfaction. 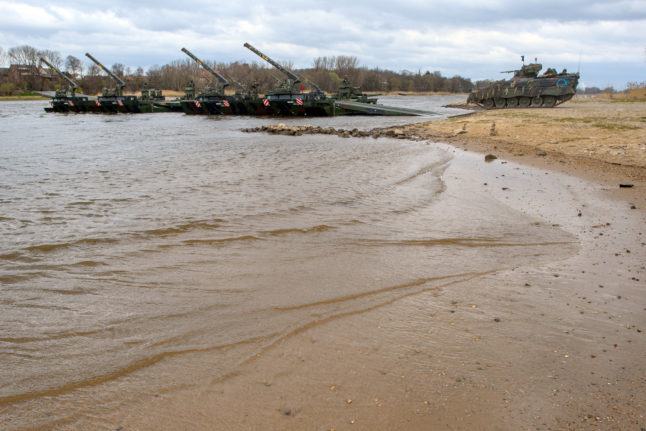 No doubt, Scholz is hoping to himself “do a Merkel”, keeping a low profile and becoming entrenched to the point where Germans cannot imagine life without him and so eventually come to adulate him. Times have changed, though – and as the Chancellor who coined the term Zeitenwende (“change in times” or “turning point”), nobody should be more aware of that than Olaf Scholz.

Germans are changing with the times, and now expect more than aloof Merkel-style management of our various national weaknesses: they want the sustained, systemic change Olaf Scholz said he stood for. And the change needs to start (or perhaps: start again) at the top with him. Scholz can no longer count on the benefit of the doubt.