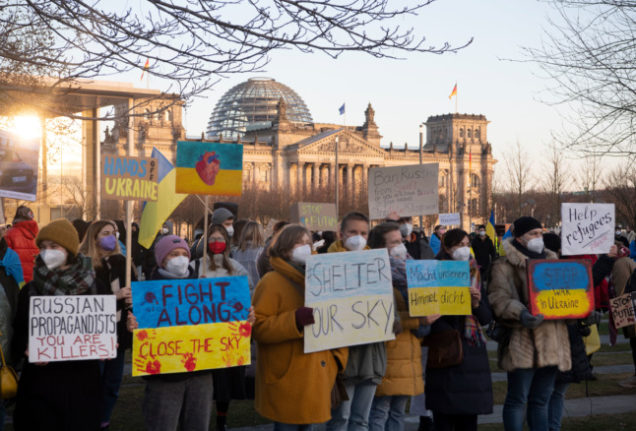 It was an address that will likely be studied for years to come by everyone, from German residents to pollsters, journalists, and fellow politicians.

On Sunday, German Chancellor Olaf Scholz gave a watershed speech to the Bundestag, announcing that Germany would break with decades of its trademark restraint on military matters – a policy linked to its WWII legacy – by sending German weapons to arm Ukraine against invading Russian soldiers.

It was a policy Scholz’s government had previously taken great pains to avoid, frustrating both the Ukrainian government and Germany’s allies in NATO, including Poland and the United States.

But Scholz was only getting started.

Not yet in office three months, the Chancellor also announced the government was going to immediately spend €100 billion to modernise the German military and increase annual defence spending to more than two percent of German GDP.

In the past, that’s been an unpopular policy with the German public, even though all NATO members committed to that target in 2014. Only a year ago, Annalena Baerbock (who is now Foreign Minister) had called the debate over the two percent target “absurd,” saying it was an arbitrary target. 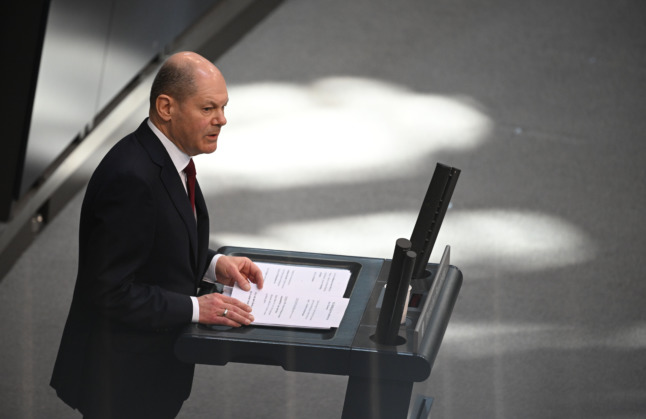 Scholz in his speech said that the war marked a “Zeitenwende”. Roughly translated, this word means a huge turning point or a sea change.

“This is one of the biggest shifts in German foreign policy since 1945,” political scientist Dr. Marcel Dirsus with Kiel University’s Institute for Security Policy told The Local.

“Olaf Scholz didn’t just end decades of his own party’s positions within a single speech, he brought the public along with him. What we’re seeing now is nothing short of revolutionary.

“Even months ago, the idea of Germany delivering weapons that might be used to kill Russians would have been unthinkable. Now Germans are sending Panzerfausts (anti-tank weapons) to Ukraine with the explicit aim of taking out Russian tanks.”

Other commentators have also spoken of the dramatic change.

Berthold Kohler with the Frankfurter Allgemeine Zeitung said that Scholz had given notice of a fundamental change in German politics “not seen since reunification”.

As Scholz spoke in the Bundestag in Berlin, over 100,000 people gathered mere blocks away with “Stop Putin” signs and Ukrainian flags. Some even drew the flag on their FFP2 masks.

One of my favourite snapshots of Sunday’s 100,000 strong #StandWithUkraine protest near Berlin’s Victory Column. pic.twitter.com/P6LJsoWBrU

It was one of the largest such anti-war protests in the world that day. But would the wider German public support Scholz’s unprecedented moves to help the Ukrainians with actual weapons?

On Tuesday, a new poll dropped suggesting the answer was an emphatic “Ja.”

The Forsa poll, conducted for German broadcaster ntv, found that 78 percent of those surveyed supported both sending weapons to Ukraine and the federal government’s decision to immediately spend €100 billion on modernising the German military. Before Russia’s invasion, both steps were considered highly controversial in Germany.

Support for arming Ukraine directly signals the strongest shift in German public opinion – with 78 percent now in favour. Only about a month ago, about 73 percent were opposed.

That previous result was well in keeping with Germany’s post-war stance. Even Foreign Minister Annalena Baerbock, a who advocated a more values-based foreign policy that would be tougher on authoritarian regimes like Russia and China, originally came out against arming Ukraine, citing Germany’s violent past.

“Our restrictive arms export policy is based on our history,” she said at the time. Scholz originally wouldn’t even let Estonia send German-made artillery.

Tuesday’s poll appeared to confirm that not only had the government done a complete U-turn from the month before, but the public had as well.

Marking another – albeit smaller – shift in public opinion, the same poll found that around half of Germans are now in favour of Ukrainian membership in both NATO and the EU. To put that in context, another survey carried out just before Russia’s invasion found that over half were in favour of offering Russian President Vladimir Putin assurances that Ukrainian membership in NATO was off the table.

So what explains the German public’s sudden willingness to break with decades of its traditionally peaceful, militarily pacifist self-image? There’s unfortunately been many other wars and conflicts in the world since 1945. What is different about this one that made Germans make such a drastic change?

For Dr. Mareike Kleine, an Assistant Professor of EU Politics at the London School of Economics, the result isn’t as surprising as one might think at first.

“We’re dealing with an obvious and flagrant violation of public international law,” she told The Local.

“Emotionally, it is [also] a war at Germany’s doorstep, an invasion of a much weaker, more democratic and pro-EU state by a powerful, autocratic one that openly defies liberal values. It bears striking similarity to Germany’s attack on Poland in 1939. In other words, [response to] the war combines all the elements that Germany can rally behind.”

The change isn’t just evident in how Germany is now seeing itself militarily. Russia’s war in Ukraine has also seen the end of another controversial German foreign policy – the Nord Stream 2 pipeline designed to bypass eastern European countries to supply Russian gas directly to Germany through the Baltic Sea.

Around 60 percent of Germans supported its continuation only about a month ago. Before last week, few high-ranking German politicians were ready to admit it was a project with geopolitical implications that might help Putin isolate eastern European countries economically and politically. Instead, many German politicians – including previous Chancellor Angela Merkel – stressed that Nord Stream 2 was purely a commercial project, a line Germany’s NATO allies never bought.

And then last week, Chancellor Scholz suspended it as part of German government responses to Russian aggression in Ukraine.

There has been a dramatic change in the situation, and we must now reassess; this will include #NordStream2. I have asked our Economic Affairs Ministry to conduct a new analysis of the security of the energy supply. Under the present circumstances, certification is not possible.

So far, his decision is translating into Merkel-like approval ratings – which the Forsa poll currently pegs at 56 percent. His leadership is most strongly supported among voters for his own Social Democrats – a party previously known for its close relationship with Russian elites.

Yet, even a majority of voters for the opposition Christian Democrats – a party that previous Chancellor Angela Merkel led for nearly two decades – currently approve of Scholz’s performance.

But could this shift be temporary?

Dr. Ursula Münch, Director of the Academy for Political Education in Tutzing, says there’s a good chance it could continue.

“[Scholz] presented himself very differently in his speech to the Bundestag [on Sunday] than in the first few weeks of his term,” she told The Local.

“He spoke much more clearly and forcefully than before.

“Crises are the hour of the Executive, and a security crisis as serious as this one increases the demand for effective politics and assertive politicians.

“At the beginning of the coronavirus pandemic, we saw even higher approval ratings for the federal government; I’m assuming that the poll numbers will continue to go up.”