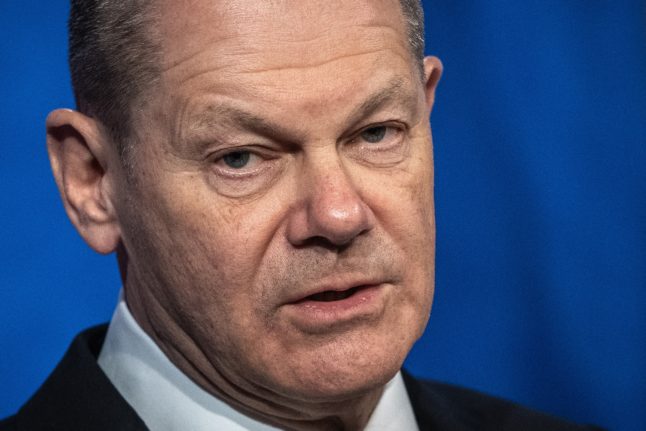 In the past few weeks, an iconic slogan from Olaf Scholz’s election campaign has been repeatedly returning to haunt him: “Wer Führung bestellt, der kriegt sie auch” (If you order leadership, you get it.)

Facing pressure over his lack of support for a Russian energy embargo and a refusal to send heavy weapons to Ukraine, critics from across the political spectrum – both at home and abroad – are now accusing Scholz of being anything but a decisive leader.

Germany has so far delivered around €80 million worth of weaponry to Ukraine, but has refused to supply so-called “heavy weapons” such as battle tanks, combat aircraft, warships and submarines.

READ ALSO: Majority of Germans ‘in favour’ of delivery of heavy weapons to Ukraine

Following a video conference with NATO and EU government leaders on Tuesday, the German Chancellor’s decision to call a press conference fuelled speculation that a U-turn was coming.

However, to many people’s bemusement, Scholz used the platform to simply reiterate his decision for Germany not to send heavy weapons to Ukraine.

He backed up his stance by saying that the Bundeswehr was underequipped and that the delivery of heavy weapons would lead to an uncontrollable escalation of events.

But his words – and the decision to call a press conference in order, in the words of one commentator, to “say nothing” – have provoked a fresh wave of criticism.

Calling a press conference to say nothing new, double down on doing too little at a time when most of your voters think you should do more, and hoping no one will notice should henceforth be called “pulling a Scholz.”

The Ukrainian Ambassador Andriy Melnyk said that the German leader’s remarks were received “with great disappointment and bitterness” in Ukraine’s capital Kyiv, and he poked holes in his argument that the Bundeswehr was underequipped.

“The thesis that the Bundeswehr would no longer be able to supply Ukraine with anything is not comprehensible,” Melnyk said.

He pointed out that the Bundeswehr has more than 400 Marder infantry fighting vehicles, about 100 of which are used for training and education and could be handed over to Ukraine immediately.

“Very crucial would also be the delivery of howitzers 2000.” According to Melnyk, the Bundeswehr has around 120 of these long-range artillery pieces in its inventory.

German politicians from both within and outside the coalition government are also launching criticism at the Chancellor.

FDP defence politician Marie-Agnes Strack-Zimmermann attacked the Chancellor on Twitter, saying: “But you have to fight for freedom and human rights, you don’t get them for free. There was still too little substance for that today.”

And politicians aren’t the only ones at odds with Scholz over his stance on Ukraine: a recent poll by Spiegel also revealed widespread dissatisfaction with the Social Democrat’s handling of the crisis amongst the German population.

In answer to the question: “Would you currently describe Chancellor Olaf Scholz as strong in leadership?”, 65 percent of respondents answered “no”.

This result marks a painfully ironic turnaround in public feeling towards the Chancellor, whose approval rating was at 65 percent only three months ago.