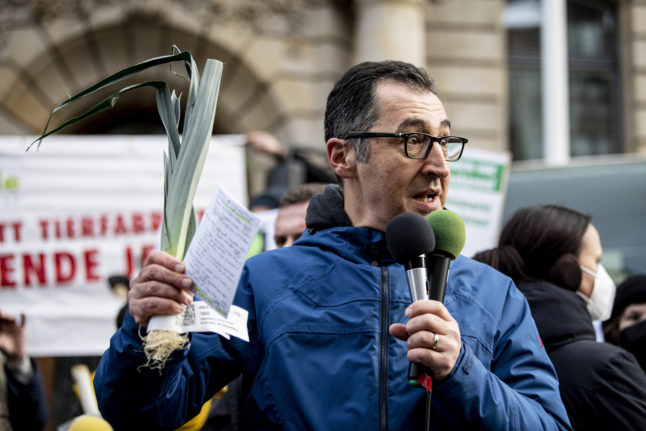 Cem Özdemir, Federal Minister of Food and Agriculture, stands with a leek in his hand in front of the Ministry of Agriculture during the protest action of the "Wir haben es satt!" (we are fed up). Photo: picture alliance/dpa | Fabian Sommer.

In response to the significant increases in food prices in recent months, social and consumer groups have been calling for the abolition of value-added tax on certain fresh foods.

The calls follow a recent amendment to EU law, which makes it now theoretically possible for member states to scrap VAT on fresh food.

Federal Agriculture Minister Cem Özdemir (Greens) has now also come out in favour of these proposals, saying he personally supports the renewed calls for the abolition of VAT on fruit, vegetables and pulses (such as beans, lentils and peas).

Özdemir told the German Press Agency: “In the debate on the first relief package, I had already indicated that a reduction in VAT on healthy foods would particularly benefit those who have little or no financial leeway.”

“If we make fruit and vegetables cheaper, we not only relieve consumers comparatively inexpensively, but we would also promote a healthy diet,” the Green politician said.

However, he added that putting such a measure into action would be a matter for the Ministry of Finance.

READ ALSO: Will Germany reduce VAT to ease the cost of living crisis?

A temporary scrap of value-added tax on fresh food could help people with low incomes in particular as, according to the German Institute for Economic Research (DIW), they spend a larger proportion of their monthly income on food than people with high incomes.

President of the DIW, Marcel Fratzscher, told the Augsburger Allgemeine newspaper: “The German government should temporarily abolish the reduced VAT rate of seven percent, as this would make food and other basic necessities cheaper, and help people quickly and unbureaucratically.”

Criticism from economists and retailers

The proposed measure has received criticism from some quarters, however.

Vice president of the Kiel Institute for the World Economy, Stefan Kooths, told the Rheinischer Post newspaper that that rising prices reflect greater shortages that the state cannot eliminate.

“If the state wants to effectively do something about higher food prices, it should think about freeing up farmland,” he said.

The German Trade Association (HDE) also criticised the proposal. They said that an end of to food VAT – a so-called “flat” tax that charges the same to all households regardless of income – would favour those who are able to manage cope with the rising prices.

“Instead, the federal government should increase state benefits accordingly and, if necessary, make appropriate improvements in its relief package,” they said.

With the cost of living spiralling, the government is working on a new package of energy relief measures that will include tax breaks for low- and middle-income earners, Scholz said during the summer press conference in Berlin on Thursday.

“The government is determined to do this,” he added. “We will do everything to help citizens get through these difficult times.”

Asked whether his focus was primarily on lower or higher earners, Scholz said he was focussed on the people “who have very little”, citing the six million workers on minimum wage in Germany, and middle-income households who have been squeezed in the current crisis.

The measures will target multiple sections of the population “so that no one is left alone, no one is faced with unsolvable problems and no one has to shoulder the challenges associated with the increased prices alone,” Scholz said.

The news comes after Finance Minister Christian Lindner (FDP) unveiled a series of tax relief proposals designed to help households cope with the high cost of the living.

Lindner’s plans include measures to ensure that people who get an inflation-linked pay rise don’t see their wage increase eaten up by higher tax – a phenomenon known as “cold progression”. He has also proposed a hike in child benefit and the tax-free allowance for lower earners.

READ ALSO: Who benefits most under Germany’s tax relief plans?

But the plans have been criticised for disproportionately benefiting higher earners: according to experts, people earning €60,000 per annum will gain €471 a year under the new plans, while those on €20,000 a year will get just €115.

Batting away criticism, Scholz described the Finance Minister’s tax relief plans as a “good proposal”, adding: “I find that very, very helpful, because we have to put together an overall package that includes all population groups.”

Additional measures are yet to be announced but will likely include adjusting housing benefit in line with the current energy prices.

The Chancellor also revealed that discussions about imposing an oil price cap to limit Russia’s revenues and relieve consumers were still ongoing.

“We’re discussing the possibility of an oil price cap,” he said. “Due to the high technical complexity, it takes a lot of time, but it’s something we’re working on intensively.”

Limiting the price of oil products is “not something you can do unilaterally”, Scholz said. “It has to be done in close cooperation with partners.”

Throughout the press conference, Scholz fielded questions on Germany’s prior energy policy, which saw the country develop an ever greater dependence on Russian gas.

In February, when Russia launched its full-scale invasion of Ukraine, Germany was still importing 55 percent of its gas from Moscow – though this has since been slashed to around 35 percent.

“For me it’s very clear that we should have reached the decision earlier than we did to change our energy policies and diversify,” Scholz said. “If we’d done that sooner, we’d only have the problem of high prices but we wouldn’t have the problem of energy security.”

The SPD politician, who was Finance Minister under Angela Merkel in the former conservative-led coalition, said there had been “big failures” in energy policy in the past. He said there had been joint decisions in the past on phasing out coal-fired power generation and nuclear energy, but no decisions that had sped up the pace of modernisation in Germany. 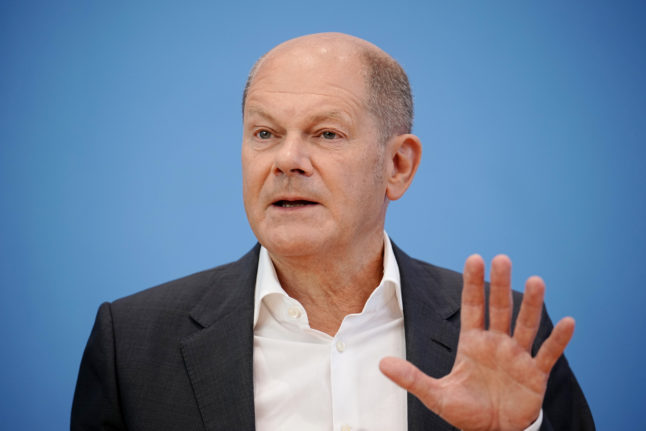 This now needs to be corrected, he said.

However, he defended the EU’s decision to avoid sanctions on Kremlin-linked energy giants, citing the heavy dependence on Russian gas in eastern European countries, as well as in Germany.

Germany is in the process of trying to replenish its gas reserves for the cooler months amid fears that Russia will cut off the energy supply in retaliation for Europe’s support of Ukraine.

The scarcity of gas, which is currently flowing through the Nord Stream 1 pipeline from Russia at just 20 percent of its full capacity, has led to soaring prices on the energy market.

Asked whether he thought there could be riots due to rising energy prices, Scholz replied: “No, I don’t think there will be unrest in this country in the form outlined. And that is because Germany is a welfare state.”