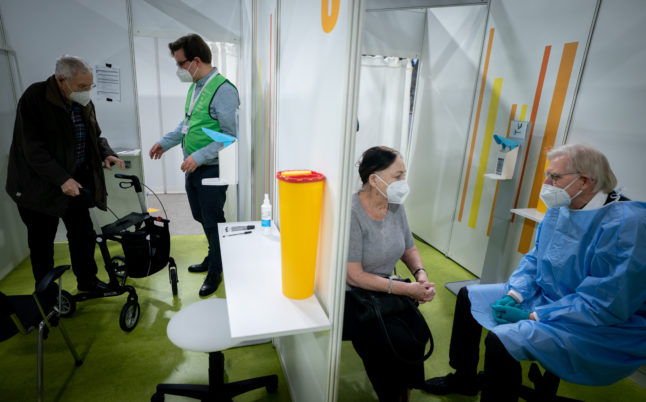 The new bill sees MPs from across the house unite around a compromise, increasing the likelihood of the vaccine mandate gaining a majority when it is put to the house on Thursday.

Under the draft law proposed by politicians from the ruling coalition parties – the Social Democrats (SPD), Free Democrats (FDP) and Greens – residents of Germany who are over 60 will have to present proof that they have received three Covid vaccinations by October 1st this year.

Meanwhile, unvaccinated adults will be required to attend a consultation with a medical professional to discuss getting a vaccination.

Originally, two competing bills in favour of a vaccine mandate were set to be put to parliament on April 8th.

The first would have mandated Covid jabs for all over-18s, while the second was a mandate for over-50s with compulsory counselling for unvaccinated adults.

Facing the prospect of failure in the Bundestag, the group supporting over-18s mandates subsequently agreed to amend their bill in favour of a more restrictive age limit.

However, the new draft law sees both groups agree on a compromise proposal with the aim of combining support and also attracting votes from the opposition parties.

The bill also contains provisions for a review of the situation in September, which could result in the vaccine mandate being expanded to include all over-18s. This would be a likely step if a new, more deadly virus variant were to take the place of Omicron in the coming months.

Announcing the proposals on Twitter, Greens health spokesperson Janosh Dahmen said the MPs were “reaching out the hand” to the conservatives to ask for their support.

“The goal of taking necessary precautions for autumn through the highest-possible adult vaccine coverage unites us, because it’s the only way to prevent the healthcare system from being overburdened,” a statement released by the pro-vaccine MPs reads.

“In the name of this goal, we conducted consultations and have jointly decided to combine our two draft bills.”

Though the milder version of the mandate is designed to attract great cross-bench support, it is still unclear if the opposition CDU/CSU parties will be willing to throw their weight behind it.

Nevertheless, conservative MPs who had previously argued that an over-18s mandate was “disproportionate” will now be under greater pressure to explain why the current bill is unacceptable.

“We are counting on the CDU/CSU to support this proposal,” the statement reads. “Our proposal envisages the exact same age limit as the conservatives’ motion and also takes up their proposals for a general vaccine register.”

Around 280 MPs have already voiced support for the new compromise bill, but they will need at least 90 further votes to achieve a majority.

However, it is conceivable that undecided conservatives may decide at the last minute to join the push for compulsory vaccination, especially since the party has recently come under pressure from its factions in the federal state parliaments.

When the vote on a vaccine mandate was first announced, Chancellor Olaf Scholz (SPD) declared that MPs would be permitted to vote with their conscience rather than along party lines.

This could increase the chance of opposition MPs agreeing to support the vaccine mandate when it is put to the house on Thursday.