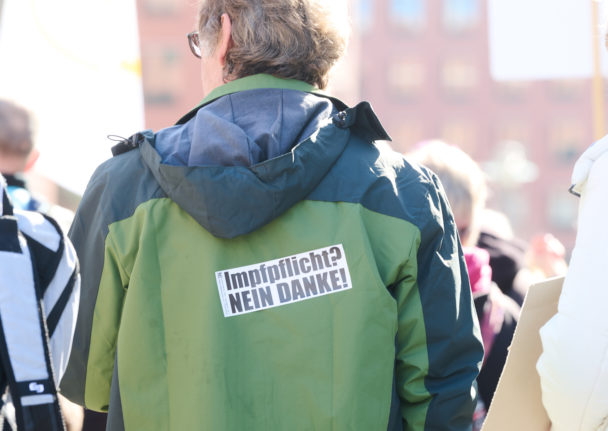 "Vaccine mandate? No thanks," reads a sticker on the back of a man's jacket at an anti-vax demo in Berlin on March 18th. Photo: picture alliance/dpa | Annette Riedl

Germany has been discussing the product of a population-wide vaccine mandate since November 2021, but progress on the issue has been incredibly slow.

A brief review of the first debate on the mandate in the Bundestag on Thursday gives an indication of why.

A number of different parliamentary factions and alliances have formed around different views on the controversial topic. Some are calling for a more hard-line version of the mandate, others calling for a softer version, and some reject the idea entirely.

Buzzing away in the background, there are also fundamental disagreements around more practical questions, such as whether to introduce a vaccine register or track the vaccinations a different way, such as through insurance companies.

As politicians took to the podium to make their speeches on Thursday, there were signs that the past few months have only solidified these positions.

If the numbers of the cross-party factions remain the same until the vote in April, there will be no majority for any of the proposals, which could ultimately mean no general mandate.

This would clearly be seen as win by those against a mandate and would come as a major blow to the traffic-light coalition, who have struggled to unify around any one plan.

But it remains to be seen whether some pro-mandate MPs could modify their positions to ensure that at least one version of the general mandate succeeds.

What proposals are on the table?

There are currently two bills in favour of general vaccine mandates competing for votes in parliament.

The first is a general mandate for all over-18s put forward by a group of SPD, FDP and Green Party politicians. If this bill passes, all adults who have lived in Germany for at least six months would have to provide proof of full vaccination or recovery after October 1st this year. There would be exceptions for under-18s and anyone with a medical condition or those for whom vaccination is not recommended, such as women in the first three months of pregnancy. Details of the bill would be reviewed every three months and the legislation would expire at the end of 2023.

The second is a proposal for a vaccine mandate for over-50s and a mandatory consultation for all other adults. This bill was put forward by a cross-party group of MPs surrounding FDP health expert Andrew Ullmann, including a number of SPD and Green Party politicians. If passed, all over-18s would have to provide proof a medical consultation or vaccination certificate by September 15th, while over-50s would be required to provide proof of vaccination or recovery by this date. 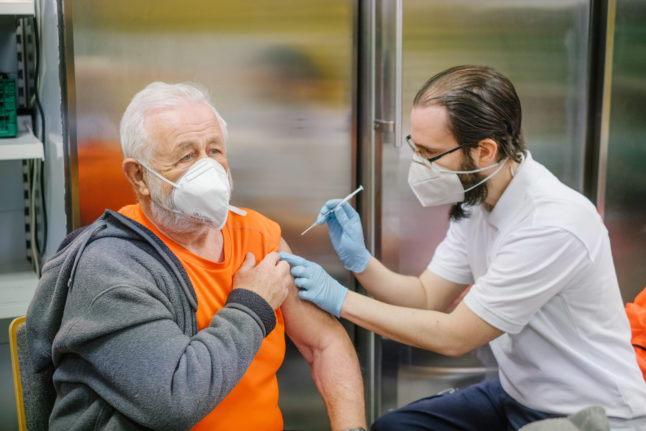 MPs will also consider a third bill put forward by the FDP’s Wolfgang Kubicki, the Left Party’s Sahra Wagenknecht and a handful of other MPs from the CDU/CSU, Left Party and Green Party. This bill rejects the idea of a vaccine mandate and proposes a number of other measures to improve the take-up of vaccines instead. These include: investigating the current immunity status of the population and the improvements needed to ease the burden on hospitals; writing to citizens personally to invite them to a vaccination appointment; offering multilingual advice centres and stepping up targeted promotion campaigns, particularly in community groups, sports clubs and religious centres.

Have the opposition parties put anything forward?

As well as bills setting out positions and plans for the mandate (or lack of one), there are also two opposition motions up for consideration.

Some CSU and CDU MPs have already indicated support for one or more of the bills put forward, but the conservatives have also put forward their own draft law. This draft envisions the establishment of a national vaccine register to provide accurate data on the current vaccination status of different population groups and individuals. It also foresees a reactivation of the vaccination campaign to target hard-to-reach groups, the expansion of vaccination infrastructure and an increased offer in places like vets and dentists, and the potential for a “vaccine mechanism” if a more worrying variant comes along. This mechanism would allow the introduction of a targeted vaccine mandate for certain groups such as elderly people and key workers.

The far-right Alternative for Germany (AfD) party has also put forward a draft. This draft rejects a vaccine mandate as “disproportionate” and also calls for the current vaccine mandate for health workers to be scrapped.

What are the arguments for each position?

Those in favour of a wide-ranging mandate for adults say that it’s the only way to prevent hard lockdowns and restrictions come autumn, when experts argue there’s serious danger of the health services becoming overburdened.

While the slightly milder Omicron variant is dominant, now is the time to protect the population against newer, more harmful variants, they argue.

“The probability that we won’t face any difficulties in battling the corona pandemic in autumn is almost zero,” Health Minister Karl Lauterbach (SPD) argued in the Bundestag debate. “It’s about as likely as autumn never arriving. We have to prepare.”

Others argued that it was unfair for a small percentage of anti-vaxxers to impede the freedom of everyone else. Emilia Fester (Greens), the youngest MP in the Bundestag, addressed her comments to the AfD in the debate, saying: “If they and their ‘friends of freedom’ had simply allowed themselves to be vaccinated at a time when most of us were so sensible and took this simple step, we would now have our freedom back again.” 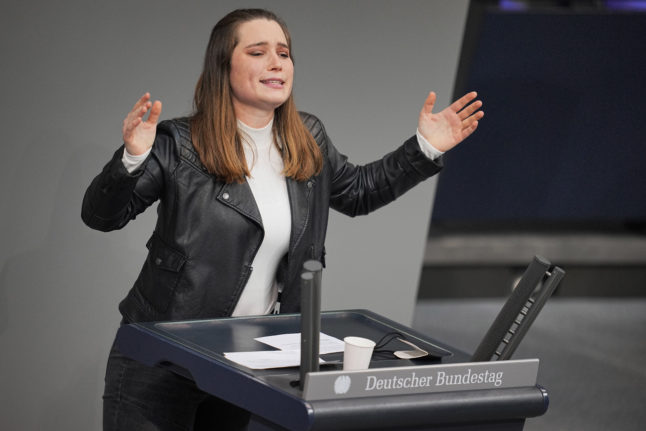 Those pushing for a more targeted version of the vaccine mandate say that the severity of Covid-19 differs among different segments of the population. While most younger people tend to have a relatively mild case of Covid, they say, unvaccinated over-50s are particularly at risk of severe illness and even death.

There are also some key differences between the perspectives of the two groups lobbying against a vaccine mandate.

The group led by Wolfgang Kubicki (FDP) acknowledge the value of vaccination but argue that the decision should be made by individuals rather than the state. In contrast, the AfD motion questions whether vaccines are useful in the fight against Covid at all.

“An overload of hospitals endangering the health system has never existed, does not exist, and is not imminent,” claimed AfD leader Alice Weidel in the Bundestag debate. “There is no constitutionally permissible justification for the introduction of a general vaccination mandate.”

Who could change in the run-up to April?

With the house splintering into a number of different factions, MPs from pro-mandate groups may manage to secure some last-minute support for their particular bill.

The most likely compromise is the bill put forward by FDP health expert Andrew Ullmann, which envisions an over-50s mandate and an obligatory medical consultation for everyone else.

If the group of traffic-light MPs behind this piece of legislation want to get it passed, they’ll probably have to rely on support from the opposition CDU/CSU parties.

One way they could do this is to tweak their draft to include the conservative’s proposal for a national vaccine register, which could bring undecided opposition MPs on board.

The conservatives are also likely to come under pressure from the heads of the federal states, who have been pushing for a general vaccine mandate since November.

While federal CDU/CSU MPs may be content to see the traffic light’s plans fall by the wayside, their counterparts in the 16 states wouldn’t be happy about that.

Since the conservatives are in government in a majority of federal states, this pressure could be enough to force a switch in allegiance from the CDU draft law to the draft by the FDP’s Ullmann.

The fact that MPs aren’t being asked to vote with their parties and are instead free to decide for themselves could also give CDU and CSU parliamentarians the push to work across party lines.

The same can’t be said for the two groups of anti-mandate MPs. Since most parliamentarians are unwilling to work with the far-right AfD, it’s likely that these competing groups will remain firmly in their respective camps come April.

READ ALSO: What would a general vaccine mandate mean for the German job market?

At the moment, only children aged five and above can get vaccinated against Covid-19 in Germany.

The European Medicines Agency (EMA) has approved the use of a reduced dose of the Pfizer/BioNTech mRNA vaccine for children between the ages of five and 12, and this age group are able to get vaccinated by doctors at practices or at dedicated vaccine centres.

Back in May, Germany’s Standing Vaccines Commission (STIKO) issued a general Covid jab recommendation for 5-12 year olds. Previously, they had only recommended the shots to children with pre-existing conditions or vulnerable contacts.

Of course, some parents are keen to get their younger children vaccinated as well – and news from the US, where both Moderna and Pfizer/BioNTech has recently been approved for children under five, has given them hope that the same will happen in Germany.

So what exactly is going on?

Well, at the moment, there does seem to be some movement in that direction, but things are still up in the air.

Back in April, Moderna announced that it had submitted a request to the European Medicines Agency (EMA) for a variation to the conditional marketing authorisation.

In plain English, this means they want permission to roll out a 25mg dose of their vaccine (as part of a two-dose series) for children aged six months to five years. This is the same dosage that is being used to vaccinate toddlers and babies in the US.

In response to a question from The Local, Pfizer/BioNTech said it was also planning to file for authorisation for the under-fives vaccine from the EMA in early July.

Depending on the EMA’s decision, this could pave the way for very young children to get the Covid jab in Germany.

Of course, this doesn’t necessarily mean that the authorities will be recommending that all parents rush out and vaccinate their young’uns.

Speaking to the Funke Media Group back in March, Health Minister Karl Lauterbach (SPD) struck a cautious tone when talking about vaccines for under fives.

“In the studies, the vaccines have not shown the immunisation effect in young children that we had hoped for. But it is precisely in this age group that the effect must be particularly clearly proven,” he said.

“It is therefore unclear at the moment whether there will be a vaccination recommendation for under-fives in Germany.”

For its part, the EMA said it was in talks with Pfizer ahead of the submission of its application for approval.

“To date, no application for an extension of indication for the use of Comirnaty (Pfizer/BioNTech) in children under five has been submitted to EMA,” a spokesperson for the EMA told The Local.

“However, EMA is in contact with the company about the possible submission of data and we will communicate on our website should we receive a request for an extension of indication.”

At the time of writing, the German Health Ministry and Robert Koch Institute (RKI) had not responded to a request for comment.