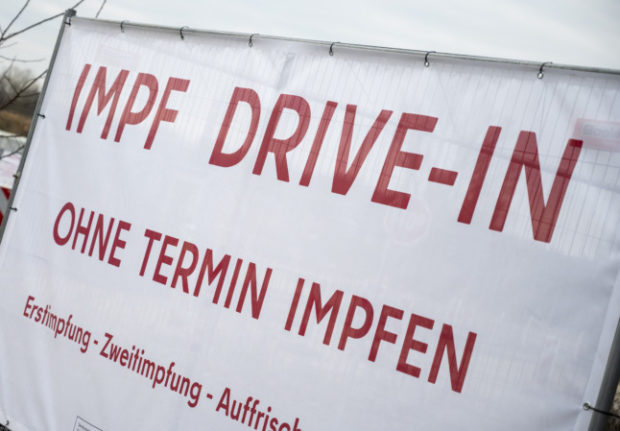 The Christian Democrats (CDU) and their Bavarian sister party the CSU, believe there should be a staggered “vaccination mechanism” for different groups of people which would only take effect if the Covid situation worsens.

The criteria for when the graduated vaccination requirement would take effect is still being thrashed out, reported German broadcaster ARD on Friday.

In the proposal they discuss considering the severity of the Covid virus variant, its transmissibility and the extent of the population’s immunity.

The details would be formulated in a possible new law, the group said.

The introduction of compulsory vaccination has sparked a heated debate in Germany for weeks.

Another group of politicians from the governing traffic light coalition want to see a general vaccine mandate for everyone over the age of 18 in Germany.

– In a first stage, everyone over the age of 60 would have to be vaccinated against Covid-19.

– The second stage concerns people over the age of 50.

– The last stage is for employees of critical infrastructure, schools, childcare centres and the police.

The proposal does not discuss compulsory vaccination, but instead uses the “vaccination mechanism” (Impfmechanismus) phrase.

The conservatives propose that the mechanism be activated by the Bundestag – if necessary – similar to what MPs in Germany did when they “determined the epidemic situation of national significance” at the beginning of the pandemic. That resulted in exceptional Covid restrictions being brought in.

The Bundestag would then also clarify at which stage, i.e. for which group of people, the vaccination mechanism takes effect.

The Christian Democrats and the CSU group are also calling for a ‘vaccination register’ to be implemented in Germany where people’s details would be stored.

However, this is controversial because of data protection concerns.

The Union proposal is also vague about sanctions. Those who choose not to get vaccinated despite the legal obligation would face a fine, but it is not yet clear how much this would be.

In recent months, the CDU/CSU had strongly advocated for a general vaccination obligation.

But many politicians are now wavering because the Omicron wave has been found to cause less severe illness than previous variants like Delta.

The federal government is not planning its own bill on compulsory vaccination.

Individual MPs, groups of MPs or individual parliamentary groups are submitting proposals instead.

However, politicians will be able to vote according to their conscience without having to toe the party line.

A group around the FDP politician Wolfgang Kubicki has also taken a clear position against compulsory vaccination.