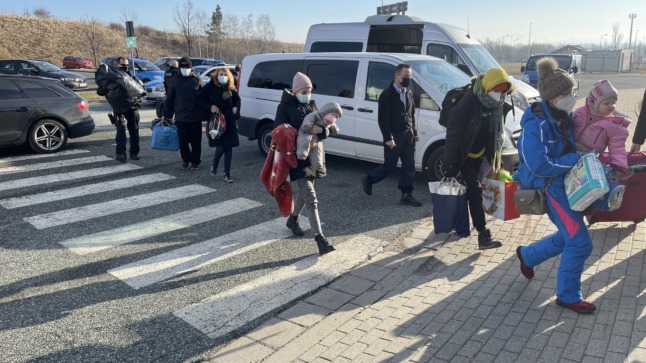 According to official figures, around 1,000 refugees from Ukraine have arrived so far in the central German states of Saxony-Anhalt, Saxony and Thuringia. The states, which were formally part of East Germany (GDR), are already preparing for more arrivals, though none of their interior ministries have said how many people are expected to arrive.

Saxony-Anhalt’s interior minister, Tamara Zieschang (CDU), said she believes not all of those seeking protection have been registered so far. She has asked arrivals from Ukraine to report to authorities so that they can be given information and advice.

Dozens of Ukrainians have already crossed into Saxony via the border with Poland near Görlitz by bus and train in recent days and it is expected that a large number of refugees will continue to arrive here first.

Saxony’s interior minister Roland Wöller (CDU) said: “It is not only an imperative of humanity, but also of European solidarity that we take in people.”

“The children should be able to go to kindergartens and schools. We very much want the women and men to be able to work as well, ” he said.

According to the Saxony state directorate, Ukrainian refugees should be accommodated centrally in Leipzig – where there are currently 550 places available – as here they can be better looked after, for example with interpreters.

Offers of help from the general public

The city of Chemnitz said after an appeal to locals, more than 200 offers to accommodate refugees were received, while the city of Dresden reported 91 offers of housing. According to the municipalities of Magdeburg and Halle (Saale), the large housing cooperatives have also offered to provide a total of around 300 flats.

Due to the large number of offers of help from the population, Saxony, as well as and many districts and municipalities, have set up special help portals and contact forms to better coordinate the offers.

In the Burgenlandkreis in Saxony-Anhalt, people seeking protection are to be accommodated in a former senior citizens’ home and a hotel. And the chambers of crafts in southern and eastern Thuringia want to make the boarding schools of their educational institutions available as accommodation.

Almost all districts of Thuringia have also set up private or voluntary initiatives for helping those affected by the war in Ukraine, including collecting donations, organising aid transports or offering housing. A large aid convoy of 14 vehicles has already returned from a first mission at the Polish-Ukrainian border.

READ ALSO: How Germany is preparing for an influx of Ukrainian refugees

In Saxony-Anhalt, too, donations of food, equipment and money are currently being collected for the victims of the war in Ukraine. The state itself is coordinating some relief measures, but there are also a number of public and private initiatives.

The state is also preparing humanitarian aid, including for the transport of injured people to hospitals.

Interior minister Tamara Zieschang said: “This is precautionary at the moment, but unfortunately, in view of the developments in Ukraine, we cannot rule out the possibility that we will also have to provide this humanitarian aid and will do so in this case as well.”

Since German reunification in 1990, the term “Mitteldeutschland” (central Germany) has often been used to describe the region that extends around the triangle of the states of Saxony, Saxony-Anhalt and Thuringia. Sometimes it is also used to refer to the three states in their entirety, especially by the Mitteldeutscher Rundfunk (Central German Broadcasting), which was founded by these states in 1991.