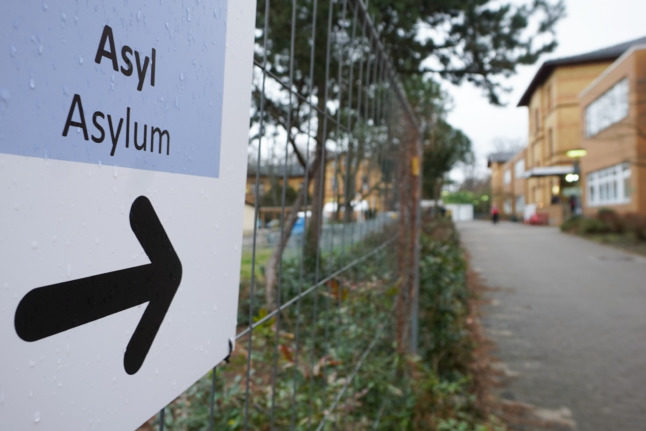 Estimates about the number of people who may have to flee Ukraine in the coming days and weeks have drawn comparisons with the refugee crisis of 2015, when hundreds of thousands fled war-torn Syria and headed across the Mediterranean into Europe. At the time, disunity in Europe over the crisis led to former Chancellor Angela Merkel accepting more than a million asylum seekers into Germany, a move that prompted years of debate and fierce criticism from the hard right.

This time, however, the European Union seems fully unified in its approach and has declared that Ukrainians should be given the right to live and work in any member state for at least three years in light of the crisis.

With Germany among those declaring its willingness to accept refugees, the pressure will be on to ensure that it is fully prepared and able to provide people with an acceptable quality of life.

How many refugees are there?

So far, the United Nations estimates that more than 500,000 people have been forced to leave Ukraine after Russian troops invaded the country. Many of these – an estimated 350,000 or so – have fled into neighbouring Poland, and some will continue on to Germany.

To put this in context, this is a snapshot of the number of people who have left Ukraine within the first five days of the crisis. The UN believes around four million displaced Ukrainians could seek refuge in other countries during the conflict.

The scale of the crisis has led to some to talk of a historic wave of refugees. “The EU is really doing a 180-degree turn on its previous immigration policies,” Wiebke Judith of refugee advocacy organisation Pro Asyl told Tagesschau. “This is due to the overall geopolitical situation. There is greater solidarity with neighbouring countries than was the case in 2015 with the majority of those who fled at that time.”

How many people are entering Germany?

So far, the number of refugees crossing the German border has been relatively modest compared to the influx in places like Poland, Romania, Hungary and Slovakia. According to the most recent estimates, approximately 5,300 Ukrainians have reached the German borders so far – with many heading to eastern cities like the capital.

In Berlin alone, about 400 people arrived over the weekend, with a further 1,300 arriving on trains from Poland on Tuesday, according to the State Office for Refugee Affairs. However, more are expected every day.

At present, there have been no targets set for the acceptance of refugees, and none of the EU countries neighbouring Ukraine have so far asked for Germany to do more. “For us, the main thing now is to find unbureaucratic solutions to get people to safety quickly,” Interior Minister Nancy Fraeser told ARD. “It’s less about distribution, it’s about seeing how we can help the neighbouring states.”

Is it easy to cross the border?

Technically, people should be in possession of a biometric passport in order to cross the border, but in reality, this is highly unlikely to be enforced at present. This is partly because both Poland and Germany are in Schengen – meaning no regular border checks – and partly because officials are likely to waive initial requirements for full paperwork during the current crisis.

To facilitate travel from Poland into Germany, rail operator Deutsche Bahn also announced on Sunday that it would be offering free train travel for any Ukrainian national or resident heading from Poland to Germany. It said it was working with Polish railways to put on additional services. This should make it easy for more refugees to carry on to Germany after entering Poland. 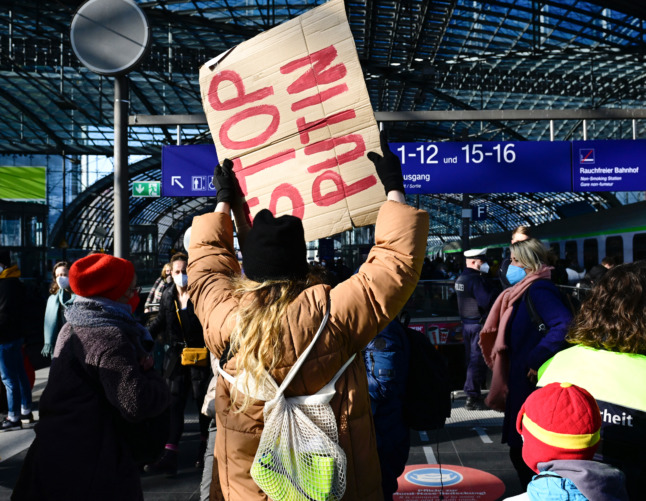 A person holds a placard reading “Stop Putin” as she waits for a train with people arriving from Ukraine via Wroclaw in Poland as they fled Ukraine after Russia’s invasion on Ukraine. Photo: Tobias Schwarz / AFP

How long can they stay?

Under current rules, Ukrainian nationals are allowed to stay in any EU country for up to 90 days, and the German government has confirmed that this could be extended for another 90 via a residence permit application if the situation in Ukraine were still ongoing.

However, the EU is currently looking into making sweeping changes that would allow people fleeing Ukraine to receive a right of abode in member states without a lengthly asylum process. At present, officials have floated the idea of a permit for three years that would include a work permit, access to social welfare, medical care and, under certain circumstances, family reunification.

A concrete proposal will be put on the table at a meeting of EU interior ministers on Thursday.

Is there enough accommodation available?

According to the Office for Migration and Refugees (BAMF), the government is already coordinating closely with the federal states “to ensure the even distribution of war refugees arriving in Germany”. Due to the overwhelming willingness of the federal states to take in refugees from Ukraine, officials don’t currently expect bottlenecks in accommodation, BAMF told Tagesschau.

The latest reports from Berlin suggest that the city is reviving infrastructure from 2015 and 2016 to allow it to cater for a greater number of asylum seekers. The city has already prepared 1,300 emergency beds for refugees and is planning to add 1,200 more in the coming days.

Just across the border from Poland in Brandenburg, accommodation is being readied for 10,000 people, regional interior minister Michael Stuebgen told RBB. 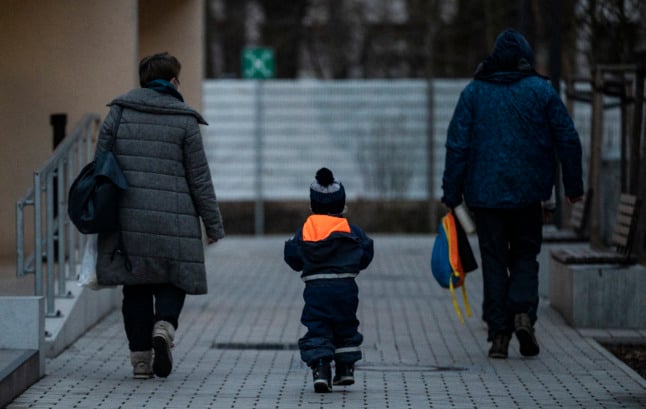 A Ukrainian couple with a young child, from the Ukrainian city of Kharkiv, procede to their temporary lodging at a refugee center in Berlin on February 25th, 2022. Photo: John Macdougall / AFP

Meanwhile, a number of cities in North Rhine-Westphalia, including Cologne, Essen and Düsseldorf, have expressed their readiness to take in refugees. According to recent statements, 850 free refugee beds are available in Essen at present, though many facilities are occupied by people from Afghanistan.

As the number of refugees grows, it’s likely we’ll see German states putting their old refugee accommodation from the mid-2000s back into use – assuming there is any available.

Many people around the country have also been using online forms to express their readiness to host Ukrainian refugees in spare rooms and empty accommodation. The government is also hoping that the some 330,000 Ukrainians and people of Ukrainian heritage will be able to support friends and relatives arriving from the country.

What are the other issues?

Following reports that African students in Ukraine were prevented from crossing the border into Poland along with white Ukrainians, there are concerns that non-European refugees will receive a much less warm welcome when fleeing the war zone.

Refugee advocacy group Pro Asyl has welcomed the willingness of the EU to help Ukrainians fleeing war, but has cautioned that all residents of Ukraine should be able to seek refuge elsewhere, regardless of their nationality.

“Ukraine itself has offered many people protection from war and persecution in recent years, for example from Syria, Chechnya and Somalia,” the organisation told Tagesschau.

In addition, it said, there were Afghans evacuated from Kabul and students from all over the world.

“The bombs don’t differentiate as far as nationality and skin colour are concerned, and just as little differentiation should be made at the borders,” said the head of Pro Asyl’s Europe department, Karl Kopp.