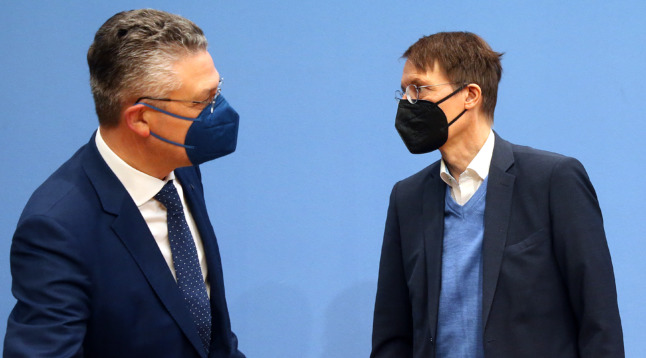 “We are facing a turning point,” said Wieler during the press conference with Health Minister Karl Lauterbach on Tuesday.

“I am optimistic that we will soon get through the Omicron wave, even if the peak of the wave has not yet been reached.

“We have navigated through this storm comparatively well so far.”

But according to the head of the RKI, it is too early to sound the all-clear – because so far, mainly younger people have been hit in this wave while the incidence among older people is gradually rising.

The high number of unvaccinated people over the age of 60 continues to be a cause for concern, so Wieler called for the restrictions to slow the spread to remain in place to protect vulnerable groups and critical infrastructure.

“In a few weeks, we will have weathered the Omikron wave,” said Wieler. “Let’s stay calm and mindful and alert. And then we can relax and look forward to Easter.”

During the press conference, Health Minister Lauterbach spoke out against some region’s plans to relax Germany’s tough Covid restrictions while infections are still rocketing.

He said Germany should expect to reach the peak of the Omicron wave in mid-February or “possibly a little later”.

Lauterbach said the measures that have been taken by Germany to slow the wave of infections – including barring unvaccinated people from much of public life and the closure of clubs – were working. “So they are right.” he said.

He said significant reopening of public life would jeopardise the “functioning, successful strategy”, and prolong the wave.

“We cannot support broad relaxations as they are currently being discussed at this point in time,” said Lauterbach, adding he is particularly concerned for older unvaccinated people in Germany.

Lauterbach said he could envisage restrictions being eased well before the Easter holidays, which fall in April this year.

It came as Bavaria’s premier Markus Söder struck out on his own this week by announcing that a host of measures would be relaxed.

He intends to scrap the nighttime curfew for restaurants, and increase the seating capacity in cultural and sporting venues.

Meanwhile, services like hair salons, tattoo parlous and beauticians will be able to operate under a 3G policy. This will allow unvaccinated people to use a negative test for entry, rather than a vaccination or recovery certificate (known as 2G rules).

Söder also plans to suspend compulsory vaccination for employees in the health and care sector in Bavaria.

Lauterbach said Söder was sending a “dangerous signal”, but said he hoped the government could find a solution with the states for the implementation of the agreed law, which is due to come into force on March 15th.

Lauterbach, a trained epidemiologist, also criticised medical staff who refuse to get vaccinated against Covid in the first place.

“It can’t be acceptable that the staff in these facilities say: ‘we do not accept the state of western knowledge, I do not believe in vaccination’,” said Lauterbach, adding that it is “not really a justifiable position for medical staff”.