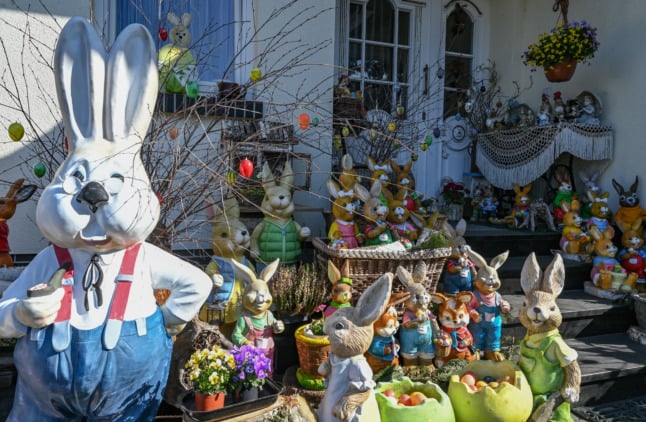 “I believe that we will relax well before Easter,” Lauterbach told Bild on Monday. “I am firmly convinced of that.”

Easter is in the middle of April this year, meaning certain restrictions could be dropped over the next two months.

However, Lauterbach cautioned against rushing the reopening of public life while infection rates were still soaring.

“We still haven’t reached the peak of the wave,” he said. “Relaxing restrictions when case numbers at at their highest would be like pouring petrol into the fire.”

The next meeting between the federal and state governments is scheduled for February 16th and the government is already facing mounting pressure to agree on a reopening plan.

In previous weeks, high-profile figures from the CDU and CSU have called on the traffic light coalition to set out concrete steps for when and how each of the rules could be scrapped.

Speaking to the regional Rheinische Post on Monday, CDU leader Friedrich Merz became the latest opposition figure to set out his proposals.

Commenting on the different infection levels in different parts of the country, Merz proposed letting states go their own way in choosing whether to maintain or loosen restrictions.

“We have very different infection patterns,” he said. “Schleswig-Holstein could almost follow the Danish path (of getting rid of all restrictions). For Bavaria and Saxony, that is currently out of the question. So we have to proceed in a regionally graduated manner.”

Merz said he expected the next conference of regional leaders to result in a “cautious roadmap” that would provide routes to reopening.

At the previous meeting on January 24th, federal and state leaders had agreed that they would discuss strategies for easing some of the current rules as soon as an overload of the healthcare system could be ruled out.

However, Health Minister Karl Lauterbach (SPD) and Robert Koch Institute (RKI) president Lothar Wieler have predicted that the next conference could coincide with the peak of the Omicron wave in which Germany could see around 400,000 new cases a day.

As of Monday, the RKI recorded a 7-day incidence of 1,426 Covid infections per 100,000 people. More than 95,000 infections were reported by the local health authorities in the last 24 hour period – though reporting tends to fall at the weekend.

In the meantime, however, there are signs that states are already starting to go their own way.

Hesse will relax its Covid restrictions from Monday onwards and end the 2G rule in the retail sector, with the northern state of Schleswig-Holstein set to follow on Wednesday. Baden-Württemberg has already ended 2G-plus in catering and 2G in retail, and is working on a plan for easing further restrictions that could possibly take effect at the end of February.

Bavaria chose not to implement 2G-plus in hospitality businesses and has recently ended 2G in non-essential shops while upping the capacity of public events.

Commenting on the changes, Frank Ulrich Montgomery, chairman of the World Medical Association, called for a more evidence-based approach to lifting restrictions. “What is decisive is where the infection drivers are,” he told the Rheinische Post. “Is it not the contacts in retail? Then 2G should be replaced there by a consistent mask-wearing requirement. We need more scientific evidence of what is happening where.”

These science-led rules would have to be enforced consistently and uniformly throughout the country, Montgomery argued.

“Not one thing in Brandenburg and another in Saxony-Anhalt,” he said. “The solidarity of the states is called for here.”