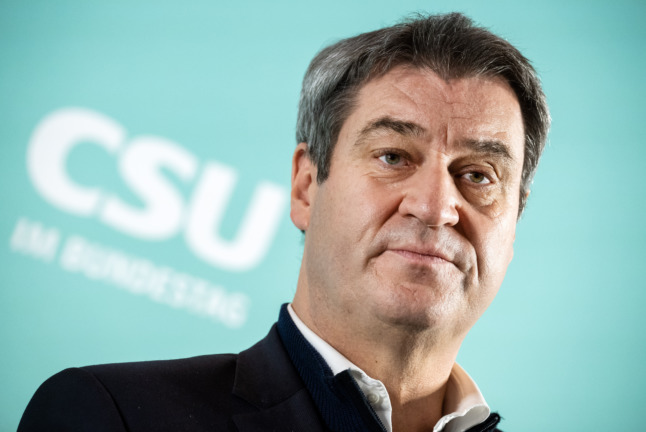 Söder, who belongs to the CSU – the Bavarian sister party of the Christian Democrats (CDU) – told German daily Bild that a plan on “opening steps” needed to be taken now.

He proposed that the current restrictions – such as the 2G-plus rule which means vaccinated/recovered people have to show proof of a booster shot or test to enter many places – should be eased.

The 2G rule means that only vaccinated and recovered people can enter. Unvaccinated people are barred.

“Firstly, with an FFP2 mask, we can dispense with the 2G rule in shops,” said Söder. “People only stay in shops for a short time. That could be implemented nationwide.”

Söder then proposed that the 2G-plus rule – currently in place for most of the hospitality industry and some cultural and leisure venues in German states – should be softened in some areas.

“In gastronomy, we should keep 2G, but do away with the ‘plus’, i.e. the additional test,” he said. “We are already doing that in Bavaria. Instead, we have stricter rules for clubs and discos where the risk of infection is particularly high.”

Under this plan, 2G-plus would remain in some areas, such as clubs.

Söder wants to see a review of contact restrictions.

“And finally, we should proceed quite fundamentally according to the principle: where FFP2 masks are worn, contact restrictions can be lowered. For this, the Health Ministry must draw up a step-by-step plan,” he said.

The topic of easing Covid measues has gained momentum this week after neighbouring Denmark relaxed its pandemic restrictions.

German Chancellor Olaf Scholz, however, does not want to follow the government in Copenhagen for the time being.

Decisions on easing the restrictions need to be made after the Omicron peak expected in mid-February, he said. “But unfortunately we have not arrived there yet,” the SPD politician told broadcaster ZDF.

The next federal-state meeting is scheduled for February 16th.

ANALYSIS: Are Germany’s Covid rules backed up by science?

‘Recovered status must be discussed’

On the topic of travel regulations, Söder said Germany needs to overhaul its travel rules system due to the rise of Omicron, which is more transmissible but generally causes milder illness than previous variants.

“The incidence has served its time as a yardstick,” said Söder. “With such high values, like we currently have, travel regulations with reference to risk areas, for example, make little sense.

“The only thing that makes sense is testing after return. That has to be adapted.”

Söder is also in favour of doing a U-turn on the recent rule change on the status for recovered people. He believes it should be six months – not three months.

“The recovered status must be discussed again in the Bundestag,” said Söder. “We must return to six months recovery status as it applies in Europe.”

The CSU leader also sees a clear link between a possible vaccine mandate and further relaxations.

He said with the introduction of compulsory vaccination, leaders have to let the public know which restrictions can be done away with.

“Because if this duty comes, other regulations must fall,” said Söder.

The Bavarian leader said Germany needed to have “caution and hope”.

“We can open a door in the Omicron wall and maybe move from pandemic to endemic if we can be sure that the health system will no longer be overburdened,” he said.

In the interview with Bild, Söder also reacted to reports of problems with the implementation of the compulsory vaccination for health staff.

As things stand, staff have to prove they are vaccinated by March 15th or risk losing their job. But hospitals have concerned about the loss of unvaccinated staff.

“Should the compulsory vaccination in care professions lead to a real nursing emergency, we will have to suspend and postpone it,” Söder said.

“At the peak of the burden, we cannot do without nursing staff.”