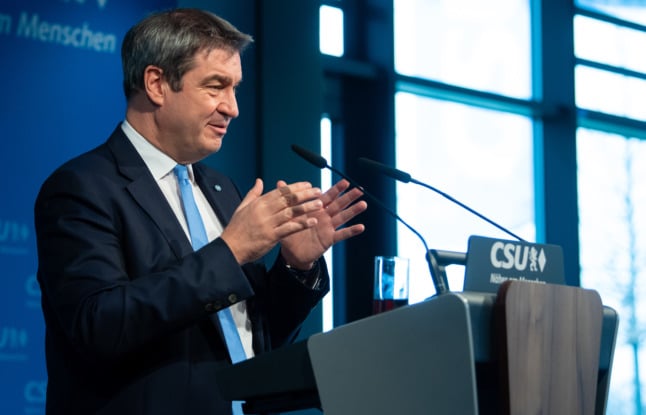 The vaccine mandate for workers in the health and care sectors is supposed to come into force on March 15th, but Bavaria has confirmed that it plans to postpone its implementation indefinitely.

The southern state will act “generously” with healthcare employees, Söder explained, “which amounts to a de facto suspension of enforcement”.

Söder justified the separate Bavarian approach, which has yet to be worked out in detail, with the difficulties nursing homes have in finding staff.

The CSU leader said he was generally in favour of compulsory vaccination but felt that the “partial solution” to only apply the mandate to health workers was currently “of no help in the Omicron wave”.

Pushback to the partial vaccine mandate has been growing in Germany amid fears of mass resignations in the sector.

The mandate, which was passed by the government in December, stipulates that all workers in doctors’ surgeries, hospitals, nursing homes and other care facilities must show proof of full vaccination or a medical exemption by the middle of March.

However, in recent days the German Nursing Council has issued warnings that the plans could exacerbate the staff shortages that are already felt in care homes across the country.

At the start of February, the Federal Health Ministry hinted that local authorities could agree to let unvaccinated staff work after the mandate while making a decision on individual cases.

Speaking to the Rheinische Post on Tuesday, Gerald Gaß, the head of the German Hospital Association, also suggested that the deadline for having full vaccination protection could be extended beyond March.

Aside from Bavaria, other states are rumoured to be unhappy about the timeline set for the introduction of the mandate, suggesting that other regional leaders could make similar announcements to Söder’s in the coming days and weeks.

Alongside the vaccine mandate, Bavaria is also forging its own path in relaxing a number of Covid rules despite high incidences.

At the end of January, a court decision led to the overturning of the ‘2G’ rule in non-essential shops in the state, meaning people can now enter these retail premises regardless of their vaccination or recovery status.

Following a meeting with the CSU executive in Munich on Monday, Söder announced that the state would be introducing legislation as early as Tuesday to relax a number of other restrictions.

This includes scrapping the nighttime curfew for restaurants and increasing the seating capacity in cultural and sporting venues.

According to the Bavarian state leader, this will mean that theatres, cinemas and other cultural venues will be able to allocate up to 75 percent of their seats, while sporting events will be able to have a 50-percent audience capacity up to a maximum of 15,000 spectators.

Previously, up to 10,000 spectators had been allowed at major sports events. A handful of spectators watch the Bayern München football team warm up ahead of a match on February 5th. Football matches in Bavaria will soon be able to welcome up to 15,000 spectators. Photo: picture alliance/dpa | Sven Hoppe

In addition, services that require close physical contact such as hair salons and beauticians will be able to operate under a 3G policy. This will allow unvaccinated people to use a negative test for entry, rather than a vaccination or recovery certificate (known as 2G rules).

“We only have a third of the occupancy of intensive care beds that we had in the fourth wave of Delta – and that is the crucial thing,” Söder explained on ZDF’s Morgenmagazin programme. “Restrictions are right when the health system is extremely burdened, but this is currently not the case with Omicron.”

Söder had already argued for relaxations in national restrictions over the weekend.

“The consistent use of FFP2 masks allows us to remove some contact restrictions,” Söder wrote on Facebook on Sunday. “For this, the federal government must present a step-by-step plan.”

The prerequisite, he said, is that the clinics are not overburdened.