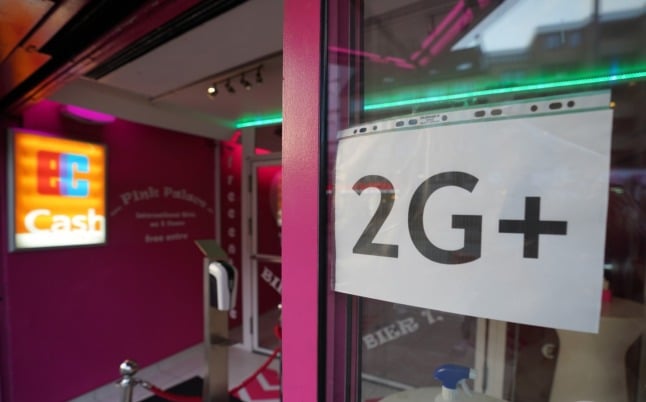 A sign on a Hamburg bar saying it is 2G plus (entry onto the vaccinated or recovered with a negative test). Photo: picture alliance/dpa | Marcus Brandt

Outgoing Chancellor Angela Merkel, incoming Chancellor Olaf Scholz, and the 16 state leaders, decided on Thursday to expand the so-called 2G rule nationwide. It means unvaccinated people will be barred from leisure and cultural facilities, as well as non-essential shops.

There are also contact restrictions for the unvaccinated, and clubs will have to close in badly-affected Covid areas. States can also choose to close more of public life if they think it is needed.

In the last weeks, the German government has also introduced 3G rules in the workplace and on public transport (meaning people have to be vaccinated, recovered or show a negative test), while some regions like Saxony and Bavaria, have shut much of public life.

The Bundestag will also vote on a vaccine mandate for people in Germany which could come into force in February 2022.

But there are fears that these measures will not break the fourth wave quickly enough, causing more pressure for already packed intensive care units.

Gernot Marx, the president of the intensive care association DIVI, pleaded for tougher contact bans for all.

“We need clear contact restrictions,” he told the Redaktionsnetzwerk Deutschland, adding that it would be best if everyone was ordered to reduce contacts, including vaccinated people.

He said that not enough is known about the effects of the new virus variant of concern, dubbed Omicron. “We cannot exclude the possibility that the vaccines have a reduced effect,” he said. “Because of this lack of knowledge, it is vital to be especially careful.”

Virologist and member of the Standing Commission on Vaccination (STIKO) Klaus Überla had similar views.

“It is a mistake to rule out contact restrictions for vaccinated people,” he said, adding that “the vaccinated play a considerable role in the spread of the virus”.

“In order to protect the health system from overload, even more far-reaching measures would be necessary in our view,” he said.

He suggested that 2G plus rule (where vaccinated and recovered people have to show a negative Covid test) should be implemented nationwide in bars, restaurants as well as for indoor sports and cultural events.

On Friday, Germany reported 74,352 Covid infections within 24 hours, and 390 Covid-related deaths. The 7-day incidence climbed to 442.1 infections per 100,000 people after a period of stagnation.

Others said the decisions by the government and states were welcome.

“The catalogue of measures comes late, but better late than not at all”, Gerd Landsberg, chief executive of the Association of Towns and Municipalities, told the Rheinische Post.

Yet epidemiologist Hajo Zeeb of the Leibniz Institute for Prevention Research and Epidemiology in Bremen, said some of the restrictions would be difficult to implement.

“It is questionable how the contact restrictions for unvaccinated people can be enforced and controlled.” He said. He added that Germany is still not out of the woods: “With the resolutions, we will still have an increase in clinics and intensive care units for about three to four weeks.”

Zeeb also said the incidence was expected to rise for some time. “The wave is not going to stop anytime soon,” he said.