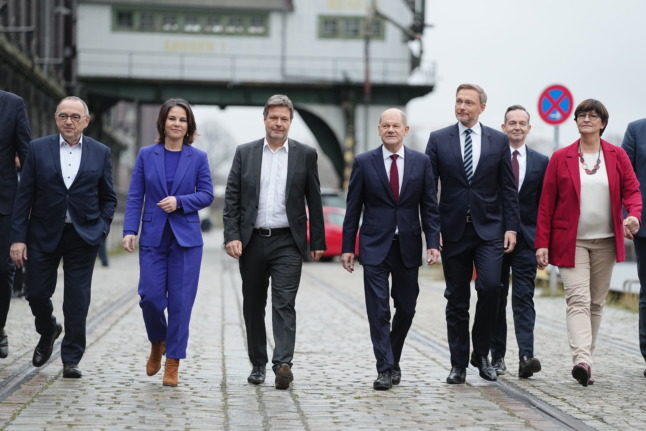 Representatives of the three coalition parties that will form Germany's new government arrive at a press conference to reveal their coalition pact on November 24th, 2021. Photo: picture alliance/dpa | Kay Nietfeld

Hundreds of reporters crammed into Berlin’s Westhafen on Wednesday to find out what Germany’s next government has in store for the country over the coming years.

The coalition pact, which was thrashed out behind closed doors at a record-breaking pace, will determine Germany’s path over the coalition government’s four-year term in power.

It contains flagship policies from all three of the parties: a hiked minimum wage for the Social Democrats (SPD), a much earlier transition away from coal for the Greens, and steering clear of tax rises for the pro-business FDP.

But it also contains policies that all parties were in favour of, such as permitting dual nationality and legalising the recreational use of cannabis.

Describing the result of the negotiations to reporters gathered at the press conference, soon-to-be Chancellor Olaf Scholz said Germany’s next government would be a “coalition of equals” in which every party played to its strengths.

Here are the key policies you need to know as Germany enters the post-Merkel era.

As you might expect for a coalition involving the Greens, the climate crisis has taken centre stage in the 177-page pact set out by the three ‘traffic light’ coalition parties.

In their agreement, the parties have pledged to phase out coal by 2030, eight years earlier than the target set by the previous conservative-led government. In a nod to the innovation-focused politics of the FDP, the parties also want to use 3.5 percent of GDP for investments in research and development that will speed up the transition to a carbon-neutral economy.

By 2030, 80 percent of Germany’s electricity should come from renewable sources such as wind and solar, the coalition revealed. That’s a significant jump up from the previous target of 65 percent.

“All suitable roof surfaces will in future be used for solar energy. For new commercial properties that will be compulsory, while for private new buildings, that will become the rule,” the parties said.

With an eye on Germany’s powerful automotive industry, the parties agreed that electric cars should number 15 million by 2030 from roughly one million currently, as combustion engine vehicles will no longer receive approval from 2035.

Caps on borrowing, no tax rises

Throughout the coalition negotiations, there was speculation that the Greens’ co-leader Robert Habeck and FDP leader Christian Lindner had each set their sights on taking control of the coveted Ministry of Finance.

Looking at the outcome of the talks on Wednesday, it’s clear who won the struggle: the FDP will be heading up the ministry, with Lindner taking on Olaf Scholz’s former job as Finance Minister. Accordingly, the coalitions’ fiscal plans have the FDP’s fingerprints all over them.

To start with, the parties have pledged to reinstate the country’s so-called debt brake, which limits the amount the state can borrow, by 2023. It was put on hold to allow for crucial public spending during the Covid crisis.

Maintaining the debt brake was a red line for the FDP, and Social Democrat Finance Minister Olaf Scholz – who will be Germany’s next chancellor – has also long been an advocate of the rule.

The parties also agreed to not raise taxes during their mandate, according to a tweet by FDP leader Christian Lindner – a win for his party which has refused to raise any fiscal pressure on taxpayers.

As you might expect for a liberal-leaning coalition, the traffic light has pledged to expand some civil liberties with proposals to ease strict rules on abortion and gender transitions.

In a key move for women and healthcare professionals, the parties have pledged to abolish paragraph 219a, a controversial piece of Nazi-era legislation that makes it illegal to advertise abortion services.

“Doctors should be able to provide public information about abortions without fear of prosecution,” they say in the document. In addition, the SPD, the Greens and the FDP plan to replace the controversial Transsexuals Act “with a self-determination law”. This would include “a procedure at the registry office that makes changes to gender possible in principle by means of self-disclosure”.

In other words, it could soon become much easier for people to change their officially recorded gender.

Going one step further than the 2017 legislation that allowed cannabis for medical use, Germany’s new government wants to legalise the recreational use of cannabis.

“We will introduce the controlled distribution of cannabis to adults for consumption purposes in licensed stores,” the parties say in the document. “This will control the quality, prevent the circulation of contaminated substances and ensure the protection of minors.”

The Greens and FDP have long been pushing to legalise cannabis, while the SPD has proposed testing regulated distribution of the drug in pilot projects. Under plans leaked last week, the government will conduct a review four years after legalisation cannabis to see what the impact of the policy has been.

As The Local reported on Wednesday, it appears that the three coalition parties have stuck to their promise to eliminate key hurdles to gaining German citizenship.

According to the coalition pact, immigrants will soon be entitled to apply for German citizenship after five years – or three if they can demonstrate high levels of integration. At present, most immigrants must wait between six to eight years before they are able to apply for citizenship. A Turkish and a German passport are held side by side. For a long time, Germany has forbidden dual nationality for non-EU citizens. Photo: picture alliance / Carsten Rehder/dpa | Carsten Rehder

In a key move for non-EU citizens, the parties revealed in the coalition pact that they would change the law to allow the holding of ‘multiple citizenships’, suggesting that dual nationality will be permitted during the next legislative period.

Currently, non-EU citizens who did not grow up in Germany must generally choose between German and foreign citizenship.

The SPD will be taking over the Ministry for Labour and Social Affairs – and it’s clear to see the influence of the centre-left party in the policies that have emerged around benefits and wages.

From next year, the traffic light coalition say they will bump up the minimum wage from €9.60 to €12 an hour. This was one of the SPD’s flagship policies at the last general election.

In addition, the much-maligned Hartz IV unemployment benefit will be scrapped in favour of a more user-friendly Bürgergeld (Citizens’ Fund). People without jobs will be able to sign up for this type of financial support quickly and digitally, and the parties have pledged that people won’t be asked to justify the size of their flats or dig into their savings for the first two years of claiming it.

Another Greens and SPD policy is the introduction of Basic Child Insurance, which will condense the piecemealed forms of social support into one lump sum that should cover children’s basic needs until the age of 18.

Under plans to combat the country’s ever-worsening housing crisis, the new government will build 400,000 new flats each year, 100,000 of which will be publicly-funded social housing for people in lower income groups. They say this plan will help both renters and the construction industry.

The parties also plan to tighten the so-called ‘rent brake’, a federal law aimed at limiting the amount a landlord can increase the rent on a property. A block of flats is built in Mainz. The new government plans to build 400,000 new homes a year. Photo: picture alliance/dpa | Sebastian Gollnow

In a sweeping change to Germany’s electoral law, the parties have greed to lower the voting age from 18 to 16.

The plans are likely to favour the Greens and FDP which are the two most popular parties among young voters, and that could cause problems for Angela Merkel’s conservatives, who are largely backed by Germany’s army of pensioners – though many older voters switched to Scholz’s SDP at the last election.