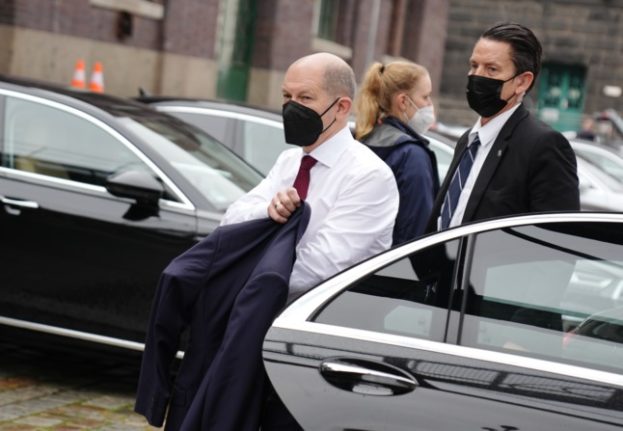 Under the motto, ‘Dare to make progress’, the new coalition – nicknamed the ‘traffic light’ after the party’s colours – released an 177 page document that sets out their vision for the coming years.

“The traffic light (coalition) is here,” announced incoming Chancellor Olaf Scholz (SPD) as he introduced the plans at a packed-out press conference held at Berlin’s Westhafen.

Describing the negotiations of the previous week, Scholz said the talks had been “intensive but above all trusting” as the parties attempted to form “a coalition of equals” that would draw on each of their strengths.

All three parties had conducted the talks with great commitment, “driven by the will to modernise and advance the country”, he added.

“The talks were as controversial as they were discreet,” FDP leader Christian Lindner told reporters gathered at the event. “We sometimes wrestled for hours over individual sentences.”

Though the liberal party had been crucial to forming an “alliance of the centre”, SPD and the Greens had “strong negotiators and good arguments” and could be “proud” of the result, he said.

Policies from all three parties

The handwriting of all three parties was clear in the agreement, which was put together in record time less than two months after the SPD came out on top in Germany’s federal elections.

In a sign of the pro-business FDP’s weight in negotiations, it was revealed that Germany will reinstate the constitutionally enshrined debt limit from 2023, while maintaining promises to invest heavily in climate and infrastructure in the years ahead.

“From 2023… we will adhere to requirements of the debt brake,” the three parties said in the pact. The brake, which caps annual borrowing, was lifted in 2020 to cope with the economic fallout from the pandemic. In a nod to the policies of the environmental Green Party, the traffic light coalition also plans to phase out coal by 2030, eight years earlier than previously, under a coalition contract they presented on Wednesday.

They also plan to use 3.5 percent of GDP for investments in research and develop based around transitioning to a carbon-neutral economy. By 2030, 80 percent of Germany’s electricity should come from renewable sources, the coalition revealed.

As reported by The Local on Friday, the next German government is planning to legalise the recreational use of cannabis.

“We will introduce the controlled distribution of cannabis to adults for consumption purposes in licensed stores,” the Social Democrats, Greens and liberal FDP said in the document. “This will control the quality, prevent the circulation of contaminated substances and ensure the protection of minors.”

SEE ALSO: How Germany’s next government is planning to legalise cannabis

As a gesture of thanks to doctors and nurses in the time of Covid, the incoming government with invest billion euros in bonuses for healthcare workers on the frontlines of the pandemic.

“The caregivers in hospitals and homes who are facing particular demands will be granted a bonus payment,” Scholz said, presenting the new government’s policy roadmap. The coalition “agreed to earmark one billion euros for this care bonus”.

Other policies that have been leaked so far include:

Dividing up the ministries

Earlier in the day, details emerged of which parties in the coalition would be taking charge of which ministries during the traffic lights’ term in government.

According to the agreement, the SPD will receive six ministries, the Greens five and the FDP four. Olaf Scholz will be heading up the government as the next German chancellor.

The Greens will receive a newly created ministry for the economy and climate, the foreign ministry as well as the ministries for environment/consumers, agriculture/nutrition and family.

The FDP will receive the ministries of finance, transport, education and justice. The SPD will take over the Ministries of the Interior and Defence, a newly created Ministry of Construction, as well as the Ministries of Health, Labour and Social Affairs and Economic Cooperation. So far, top ministerial jobs have been doled out to leaders of the Greens and FDP.

Robert Habeck, co-leader of the ecologist Greens, is touted to lead a new ‘super-ministry’ grouping the portfolios of economy, climate protection and energy.

Annalena Baerbock, the Greens’ other leader, will likely become Germany’s next foreign minister — the first woman in the job.

Other ministerial positions – such as the all-important Health Minister role – will be announced at a later date, Scholz revealed at the press conference.