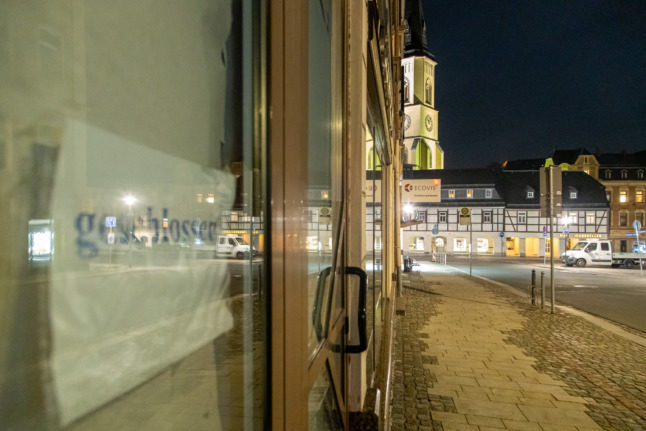 Streets stand empty in the town of Stollberg in Saxony. The eastern state has ordered the closure of nightlife and leisure facilities from Monday. Photo: picture alliance/dpa/ErzgebirgsNews/dpa-Zentralbild | Andre März

The partial lockdown in Saxony comes as the state’s weekly incidence of Covid infections rises to almost 1,000 per 100,000 people.

On Monday morning, the 7-day incidence stood at 960 per 100,000 people, according to figures from the Robert Koch Institute (RKI).

Ministers in the state have responded by ordering sweeping closures of cultural and leisure facilities, libraries, bars, clubs and discos from Monday. All large public events will be cancelled – including Christmas markets.

Meanwhile, restaurants, shops and other non-essential services will have their opening hours restricted to between 6am and 8pm, and will only be allowed to permit entry to people who are vaccinated (geimpft) or recovered (genesen) – a system known as ‘2G’.

Supermarkets and pharmacies will be exempted from the rules.

In Saxon municipalities where the incidence exceeds 1,000 per 100,000 people, an immediate curfew for unvaccinated people will come into force.

This will prevent unvaccinated people from leaving their homes without a good reason between the hours of 10pm and 6am. As of Sunday, this included the municipalities of Meißen, Bautzen, Sächsische Schweiz-Osterzgebirge, Nordsachsen and the Erzgebirgskreis.

On Friday, Söder revealed sweeping plans to cancel all of Bavaria’s Christmas markets and close bars, clubs, pubs and brothels for at least three weeks.

Restaurants will stay open but will have to close by 10pm each night, while universities, adult education centres and services like hairdressers that require close bodily contact will use a ‘2G’ entry policy.

In additional, large events will introduce a 25 percent capacity limit and will operate under a ‘2G-plus’ system, meaning only people who are vaccinated or recovered from Covid and have a negative Covid test can enter.

Curbs on the unvaccinated

In other German states, regional governments are placing new restrictions on the unvaccinated in order to stem the spread of Covid.

From Monday, the northern state of Schleswig-Holstein will introduce a ‘2G’ system for indoor public spaces, meaning the unvaccinated won’t be allowed entry to places like bars, restaurants and gyms.

In the workplace, unvaccinated people will be asked to present a negative antigen test each day, or a PCR test taken no more than 48 hours ago – a system known as ‘3G’.

Meanwhile, in the southwestern state of Baden-Württemberg, three municipalities will introduce a nighttime curfew on the unvaccinated. Under the new rules, people who’ve opted not to get their Covid jabs will be told to stay in their homes between the hours of 9pm and 5am.

On Thursday, the federal and state governments met to thrash out uniform thresholds for implementing new Covid restrictions.

If hospitalisations exceed a threshold of three per 100,000 people per week, states will introduce ‘2G’ rules – excluding unvaccinated people from public spaces.

If there are more than six Covid hospitalisations per 100,000 people, 2G-plus rules will apply to large events and venues such as clubs and discos, meaning even vaccinated and recovered people must carry a negative Covid test with them to gain entry.

On a national level, 3G rules are set to come in both on public transport and in the workplace from Wednesday, November 24th.