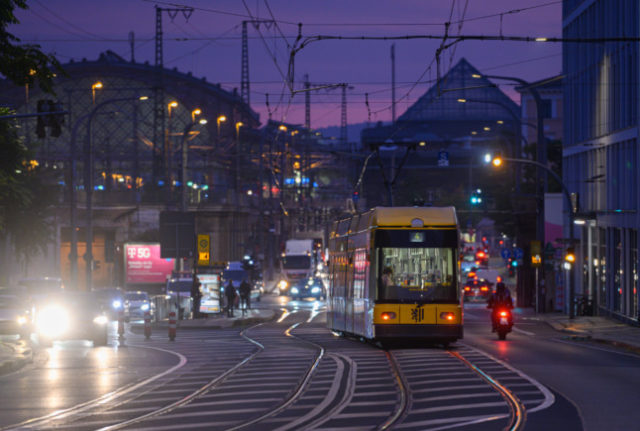 Trams and cars pass through the heart of Dresden. Under the new law, passengers must carry proof of vaccination, recovery or a negative test on public transport. Photo: picture alliance/dpa/dpa-Zentralbild | Robert Michael

Acting Chancellor Angela Merkel’s CDU/CSU parties had originally threatened to block the legislation in the upper house of parliament, where the conservatives have a small majority.

After a round of talks between the federal and state governments on Thursday, however, it was agreed that the changes to the law introduced by the Social Democrats, Greens and the FDP – the so-called ‘traffic light’ coalition parties – would be voted through and then evaluated in three weeks to see if improvements were necessary.

The new legislation allows the so-called pandemic ’emergency powers’ to expire on November 25th. But it sets out wide-ranging tools for combatting the fourth wave, including the implementation of a national ‘3G’ rule in the workplace and on public transport.

According to the bill, people will have to show that they are vaccinated (geimpft), recovered (genesen) or can supply a negative test (getestet) in order to work on-site or use both local and long-distance public transport.

These new 3G rules are likely to come in at workplaces and on public transport as early as November 24th.

READ MORE: How 3G rules could work on public transport

The new law also envisions strict testing obligations for visitors and staff in nursing and care homes and harsh penalties for people who carry fake vaccination certificates or tests. However, it stops short of permitting future blanket closures of schools and businesses, and other tougher measures such as travel bans.

Instead, individual facilities with particularly high infections rates will be allowed to close, while states can also opt to introduce or tighten measures like compulsory masks and contact restrictions.

The CSU/CSU have repeated claimed that the new toolbox of measures does not grant states enough powers to take necessary measures to fight the fourth wave.

Criticising the plans set forward by the ‘traffic light’ parties, North Rhine-Westphalia state premier Hendrik Wüst expressed concern that regional governments would no longer be able to order restaurants and bars to close if necessary.

Speaking to ZDF on Thursday evening, he argued that the ‘epidemic situation of national importance’, which is a clause in German law that grants powers to governments to set Covid measures without consulting parliament, should be extended beyond November 25th.

The changes to the Infection Protection Act, which were voted through on Friday, are intended as a replacement – though critics such as outgoing Chancellor Angela Merkel believe they do not go far enough.

In addition to the measures voted through by the Bundesrat on Friday, Germany is also set to introduce new curbs on the unvaccinated in the coming weeks.

This was decided upon following crisis talks on Thursday between the federal and state governments, with input from the traffic light parties.

According to the agreement, states will be obliged to introduce the ‘2G’ rule for most public venues such as bars and restaurants if the hospitalisation rate rises above three. This refers to the number of people hospitalised with Covid in a week per 100,000 people. If this figure then rises to more than six, vaccinated and recovered people will have to present an additional test in certain establishments such as discos, clubs and bars – a concept known as 2G plus.

As of Thursday, the 2G plus rule would affect the states of Thuringia, Saxony-Anhalt and Bavaria. However other states like Berlin are allegedly considering similar rules after recently introducing blanket 2G.

The move marks a decisive step away from regulating on the basis on infection rates alone and towards clear thresholds for Covid hospitalisations.

However, the president of the German Foundation for Patient Protection, Eugen Brysch, argued that the hospitalisation rate was a poor reflection of the actual burden on hospitals – and said that clinics needed to be monitored more closely.

In addition to the new 2G and 2G plus rules, the ordinance advocates for compulsory vaccination of medical and care professionals and strict testing rules in nursing homes.