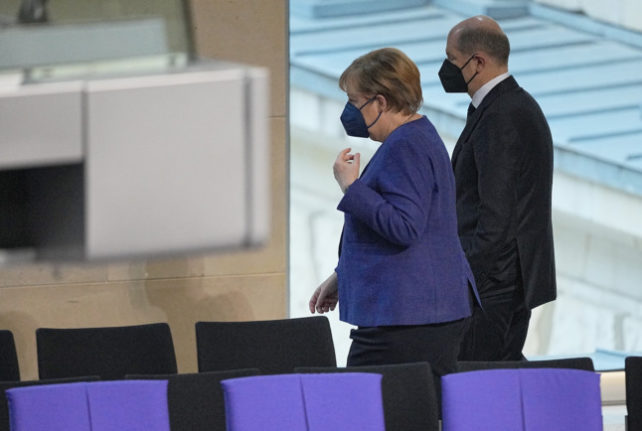 New infections over the last 24 hours soared to another record of 65,371, data from the Robert Koch Institute (RKI) showed, part of a spike Chancellor Angela Merkel has called “dramatic”.

The outgoing chancellor was in talks with leaders of Germany’s 16 states on Thursday to decide new measures to tame the surge.

On the table is tough action including requirements on those not immunised to provide negative tests in order to use public transport or go to the office.

But hours ahead of the crunch talks, a heated row broke out in the lower house of parliament, where MPs were to vote on a bill providing the legal framework for Merkel and regional leaders to deploy those measures.

The three political parties in talks to form Germany’s next government drew up a new draft law to replace ongoing legislation set to expire on November 25th.

It was passed in the Bundestag on Thursday afternoon with 398 votes in favour, 254 votes against and 36 abstentions. The traffic light parties have a total of 416 combined seats in the lower house.

But Merkel’s conservative CDU-CSU bloc says the new bill is weaker than the incumbent law, and has threatened to defeat it on Friday at the upper house of parliament when it is put to a vote on Friday.

Germany’s likely next coalition of Social Democrats, Greens and liberal FDP “is making their first decision today and also their first mistake,” said CSU politician Stephan Stracke. “They have no plan for this pandemic and how one can counter it.”

The three parties in turn hit back at Merkel’s conservatives for failing to do enough while in government.

The political tangle threatens to hold up the fight against the pandemic at a time when hospital intensive care beds are filling up rapidly.

It also marks a huge setback for the next likely government, known as the “traffic light” coalition after their party colours.

The gridlock could be a harbinger for an increasingly hamstrung Germany in the coming years with the two parliamentary houses pitted against each other.

Accused of inaction in the last weeks as Germany’s infections rebounded sharply, the incoming likely coalition scrambled to come up with new proposals to fight the virus.

It wants to shut out the unimmunised from indoor cultural events, sport activities as well as restaurants and bars.

But critics say its strategy removes the possibility for far-reaching shutdowns including school closures which Germany deployed a year ago.

Merkel’s conservatives say such measures may well be necessary in states like Saxony or Bavaria, where infection rates are among the highest in the country.

Health Minister Jens Spahn, himself from the CDU, admitted that he “wished that the states had more possibilities to react” to the surge.

Voicing frustration at the political stalemate, he said: “We don’t have to keep inventing something new. All the ideas and prescriptions we need are available. “After 21 months, I simply can’t stand it that what I’m saying and what other colleagues are saying is still not being accepted,” he said.

Wieler warned that the actual number of infections may be up to three times higher than official data indicate as many infections go undetected or untested.

“We are currently in a serious emergency. We will really have a very bad Christmas if we don’t change course now,” he said.