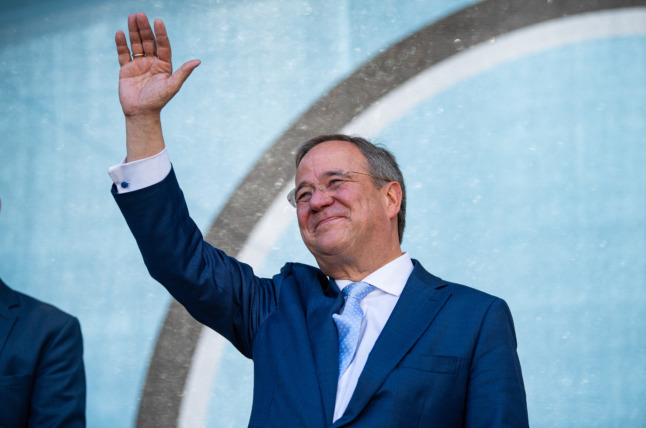 Although the Social Democrats (SPD) ended up slightly ahead in the federal elections, there’s still a chance that the CDU/CSU could secure a majority by working with the FDP and Greens, or going back into a Grand Coalition with the SDP.

Since a CDU/CSU-led coalition has been in power for the past 16 years (currently they’re in a coalition with SPD as the junior partner), they’ve largely set the course of direction for the country already – and they certainly aren’t calling for a radical shake-up of their own ideas anytime soon. For these reasons, internationals shouldn’t expect life to change too drastically under another conservative-led government.

Nevertheless, from a look at their 140-page manifesto, it’s clear they haven’t quite achieved everything they wanted too in their decade-and-a-half in power so far. Here’s what might change (and what could stay the same) for foreigners in Germany if Laschet takes the top job.

According to the Union’s manifesto, the days of waiting in line for hours at the Bürgeramt clutching your pen and paper forms would end under a new CDU/CSU-led government.

“For us, everything that can be done digitally should be done digitally,” they write in their manifesto. That means quick, user-friendly online services for day-to-day administrative tasks in Germany, such as registering at a new address, applying for a new tax number, or managing your healthcare.

The party also wants to make life easier for both officials and citizens by ensuring that public authorities can share relevant information with each other about individual cases, so a person doesn’t have to repeatedly provide data they have already shared. And they’re also keen to standardise processes to ensure that everyone from central Berlin to rural Bavaria gets the same quality of service, as well as making government more sustainable and eco-friendly.

Cheaper living space is a key battleground in the upcoming elections, and a huge issue for international livings in Germany’s major cities. All the mainstream political parties agree that there’s an issue with rising rents, but not all of them agree on how to solve it.

If the Union return to head up another coalition after September 26th’s vote, they say they are dead set against introducing things like rent caps, rent controls and other restrictions on developers – the exact policies that parties like the SPD, Greens and Die Linke (The Left) are in favour of. The CDU want to tackle the housing crisis by encouraging developers to build, rather than through regulation. Photo: picture alliance/dpa | Lino Mirgeler

Instead, they say they will make Germany an attractive place for housing developers and put all their effort into ensuring that enough homes get built to drive down the cost of rents across the country. They would ensure that future planning applications are rejected or approved within two months – otherwise they will be granted automatically.

Though many of his party are keen to cut taxes, Laschet has previously said that, with some much post-pandemic debt, now isn’t the time for either tax cuts or tax hikes.

Under a CDU-led coalition, foreigners in Germany can expect taxes to remain stable and predictable, with no sudden tax hikes.

On their website, the party declares: “Tax increases, as demanded by other parties, do more harm than good. They would hit skilled workers and small and medium-sized businesses, slow down investments in our future and endanger jobs.

“That is why we say: with us there will be no tax increases!”

Of course, this policy could be put to the test slightly if they end up going into a coalition with the SPD and the Greens, both of whom are keen to impose taxes on higher earners to support investment or relieve those on lower incomes, particularly due to the Covid crisis.

If they attempt to form a coalition with the pro-business Free Democrats, on the other hand, they will likely be under pressure to slash the tax burden on corporations and top earners.

Under chancellor candidate Armin Laschet, it seems conservatives would be keen to encourage people to get on the housing ladder in Germany.

In a country that’s known for its love affair with renting, first-time buyers or builders would be exempt from paying Grunderwerbsteuer – Germany’s real estate transfer tax, which used to fall on buyers alone but is currently split between buyers and sellers.

With this type of tax generally adding an additional 5-6 percent on to of the purchase price of a house, the planned exemption could make it easier for internationals to get on the German property ladder by saving them thousands of euros on their first house.

READ ALSO: Here’s what you need to know when buying a property in Germany

A lot of internationals have found their home in the eclectic, English-speaking start-up scenes that are booming in places like Berlin, Munich and Hamburg.

The Union are keen to see the growth of these new businesses continue by making it possible to register a new company within 24 hours online, encouraging women-led start-ups and improving access to funding and investment.

More security for the self-employed and low-earners

Since self-employed people don’t get much of a mention in the CDU’s 140 page manifesto, you can probably expect the freelance status quo to mostly continue under any future Laschet government.

However, the Union do want to ensure that people who opt to become their own boss – as many expats do – have more financial security for the future by mandating payments into either a state pensions or a private insurance fund. Armin Laschet meets an elderly supporter at an election rally. Financial security for pensioners is a key theme in the CDU’s manifesto, with the party keen to ensure livable pensions for all and prevent old-age poverty. Photo: picture alliance/dpa | Philipp Schulze

Though this might sound expensive, the party says they would ensure that early-stage freelancers or small-business owners weren’t overwhelmed by the costs of paying into either of these systems. They would also clamp down on ‘Scheinselbständigkeit‘ (fake self-employment), when employers take on staff on a freelance basis in order to avoid paying for holidays, sick leave, health insurance and pensions.

With a view to supporting lower (employed) earners in old age, the CDU also say they “want to develop a concept of ‘occupational pensions for all’ in order to further strengthen this important pillar of old-age provision.” And, for parents, they’d help to fill in gaps in pension payments due to periods of time spent bringing up their children with a continuation of the ‘Mutterrente‘, or Mother’s Pension.

Simpler recognition of qualifications for internationals

While the CDU are keen to stick to a policy of strictly managed migration, there is one area in which they might try and make life that little bit easier for internationals: the jobs market. That’s because, according to the conservatives, “There must be no immigration into the social system” – so immigrants will be expected to integrate and go to work, rather than relying on benefits.

To encourage migrants to find a job, the CDU would therefore try to simplify the process of getting foreign qualifications recognised in Germany. There isn’t too much detail on how it would be done, but presumably the plan would involve the CDU’s two favourite keywords for 2021: digital and unbureaucratic.

No movement on dual nationality

Dreaming of becoming German someday but hope to keep your original citizenship, too? Don’t count on it – at least if the CDU and CSU remain in the driving seat for the next four years.

There’s no mention at all of the issue of citizenship in the CDU’S 2021 manifesto – and this shouldn’t be taken as a good sign. The Union has been largely responsible for creating the strange hodge-podge of nationality rules that Germany has now and they see no reason for them to change.

So, if we do get yet another CDU-led coalition, it’s highly unlikely that dual nationality for first-generation immigrants will be allowed – unless those immigrants come from another EU country (as is the case at the moment).

But can the CDU still win?

That’s the million-euro question, and one that pollsters are scratching their heads over as we speak. As of Monday, September 20th, the CDU/CSU were at 22 percent in the polls, while the SPD were on 26 percent – but there’s always a margin of error in polling, and a lot can change in the run-up to election day.

The important thing to remember, though, is that even if the CDU don’t technically ‘win’, they can still be successful in forming a coalition with one or two other parties, and end up back in power regardless. Whether they do depends on how well they and the other parties perform on polling day itself, and how willing they and the others are to compromise in the pursuit of power.