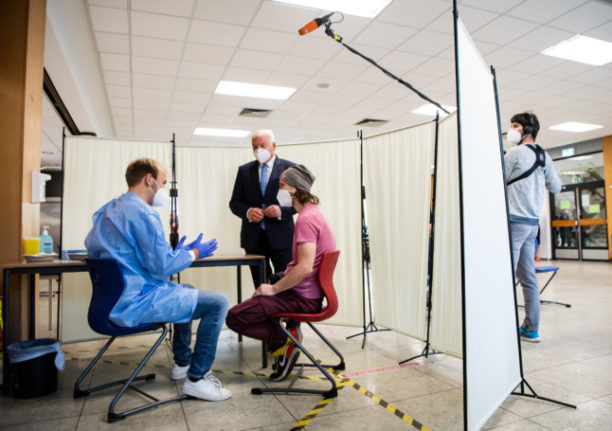 A patient receives a consultation for a jab in Berlin-Charlottenburg in the presence of German president Frank-Walter Steinmeier during "Vaccination Week". Photo: picture alliance/dpa/dpa Pool | Bernd von Jutrczenka

In August, the Federal Health Ministry announced that it would be rolling out booster shoots for people in need of addition immune protection for autumn.

Announcing the decision from the Health Ministers’ conference, Spahn said the step would be taken as a “precautionary measure” to give people additional protection from Covid over the autumn and winter months, particularly in light of the highly infectious Delta variant.

Since then, a number of states across Germany have started rolling them out.

So, who’s in line for one now, and when, how and where should they get them? We take a look at the latest.

Who can get a top-up jab in autumn?

Remember way back in spring when everyone seemed to want a jab and the government was dividing people into ‘priority groups’? Well, those are back in action for booster jabs, in a sense. In Bavaria, for example, priority groups one and two, meaning people over the age of 80 and those with particular immunity issues or severe illnesses, are first in line for their boosters.

One key divergence from this is that people who’ve only so far received a vector-vaccine (i.e. two shots of AstraZeneca or one shot of Johnson & Johnson) are also eligible for a booster jab. This will be carried out with one of the so-called ‘mRNA’ vaccines, which means either Pfizer/BioNTech or Moderna, to give this group the additional immunity that is believed to come from mixing and maxing the two types of vaccine.

Here’s a full list of the groups who are in-line for an additional jab at the moment:

Bear in mind that all of these groups have to wait at least six months after their last jab to get an additional one, since this is believed to be the period of time it takes for level of protection offered by the vaccines to decline.

Are they doing this in all the German states?

From this month (September), all German states should be rolling out the jabs, which will generally follow the guidelines of the Federal Health Ministry.

That means that GPs and vaccine centres should be instructed to offer the jabs to any of the priority groups at least six month after their last dose of vaccine.

How can I get one?

That partly depends on which of the groups you fall into, and may vary slightly from state to state. For the elderly and those in need of care, mobile vaccination teams will be heading out into the community to visit care homes and other facilities for the vulnerable.

In some states, you can also get your top-up jab at one of the remaining vaccination centres – though you may need to show evidence of your vaccination history, since due to data protection rules they may not still have that information even if you got your initial jabs there. For most people, however, the jabs will be carried out by their local GP or company doctor on request.

If you fall into one of the above groups, simply call up your doctor’s surgery or local vaccination centre at least six months after your last jab and let them know you are keen for a booster. Be prepared to show evidence of your need for one, such as your vaccine booklet with your previous vaccination history, or proof of age or illness, if they don’t have this information already.

How urgently should I get one?

Though people understandably want to have a decent amount of immune protection over autumn and winter, experts and lawmakers have urged most people not to scramble to get their shots at the earliest opportunity.

In an August press conference, Dr. med. Frank Bergmann, chairman of the state doctors’ association KV Nordrhein, said there was no time pressure for booster vaccinations – particularly for those who are otherwise healthy. Experts believe those who are generally healthy don’t need to rush to get their additional jabs. Photo: picture alliance/dpa/SOPA Images via ZUMA Press Wire | Paul Hennessy

While the government is keen to get the first and second shots into arms as quickly as possible, the timeline for booster vaccinations is far more relaxed, he indicated.

“With booster vaccinations, it should be possible to approach this with a sense of calm, as vaccine protection only diminishes gradually,” Bergmann explained. He referred to manufacturer information from BioNTech/Pfizer, which guarantees adequate vaccine protection for at least eight months after the second dose.

“So there remains a certain period of time that should be easy to manage,” Bergmann said.

Will other people get a top-up jab later?

This what the Health Ministry seems to be planning – although it is highly possible that the next government takes a different route after the September 26th elections.

Earlier this year, Health Minister Jens Spahn (CDU) completed an order for around 200 million doses of (primarily) mRNA vaccines – enough to give every resident of Germany an addition round of jabs in 2022. More recently, media reports suggested he was considering rolling out boosters to the general population “as a second step” after offering them to those who needed them most.

Perhaps unsurprisingly, the pharmaceutical companies are also touting the benefits of the extra jabs. BioNTech and Pfizer, for instance, have emphasised that a third dose offers the highest level of protection against all currently tested variants, especially the highly contagious Delta variant.

BioNTech boss Ugur Sahin has also claimed that the pandemic cannot be brought under control without regular booster jabs.

A lot, however, may depend on what the scientific studies say, and how bad the next influx of Covid is in autumn – though as we have said, there’s certainly enough vaccine there for everyone.

Can I register my interest for an extra jab now?

You certainly can, but if your last dose of vaccine was less than six months ago and you don’t fall into any of the ‘priority’ groups, it may not be worth it just yet.

In Bavaria, for example, state health minister Claus Holetschek (CSU) asked those who aren’t in line for a booster yet – but are keen to get one one – to be patient and wait for conclusive scientific data about the benefits of doing so.

However, if you are sure you want one, it probably can’t hurt to make an appointment at your local GP six months after your last jab. They may prefer to wait for guidance from the Health Ministry before giving you one, but depending on your circumstances, it could be possible after a consultation with your doctor.