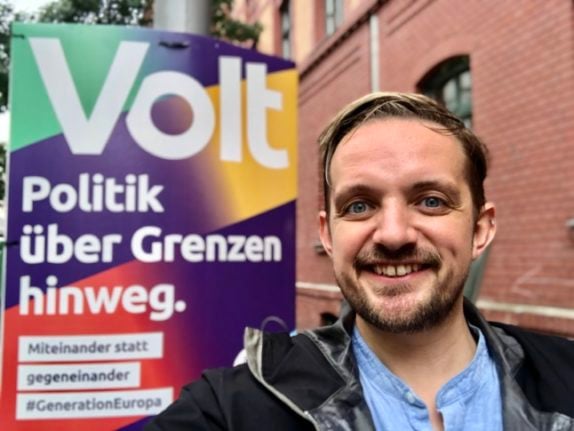 When UK national and German resident Matt Bristow stood as a candidate for Volt Deutschland in the Berlin borough of Pankow, the state electoral commission ruled he wasn’t allowed because he doesn’t have the citizenship of a Member State of the EU after the UK left the bloc.

Under Germany’s election laws, EU citizens living in Germany can vote and stand in the district assembly elections, which are taking place on September 26th this year.

Bristow – with the support of his legal team, EU lawyer Dr Alexandra von Westernhagen and constitutional lawyer Michael Plöse – this week filed an appeal with the Berlin constitutional court against this decision in urgent proceedings.

The 36-year-old – backed by his pro-European party Volt – believes he is still an EU citizen and therefore should be able to exercise the right to stand in a German local election.

VIDEO: What Brits in Germany need to know about residency after Brexit

According to EU law, Bristow, who has lived in Berlin with some gaps since 2006, only needs to be an EU citizen in order to be able to stand in local elections. In the party’s view, this status is not the same as having the citizenship of an EU member state.

Citing EU law, Volt said in a press release that “EU citizenship is an independent status: it is additional to national citizenship and does not replace it. This is consistent with the opinion of a number of experts in EU law from various EU member states.”

Bristow, who is also a citizens’ rights campaigner for British in Germany, told The Local: “Once an EU citizen always an EU citizen, regardless of what happens in the country of origin – and the only way for such a fundamental individual right to be lost is if there is due process with an individual hearing. If you look at other fundamental EU rights, that’s the way the EU system works.

“You can’t just suddenly remove rights from people in that way. So we’re not arguing that British citizens who’ve been born in the past 18 months are EU citizens, we’re saying it’s clear that they’re not. Because they were born after the UK left the EU.

“We’re saying anyone who was a UK citizen up until the 31st of January 2020 would have automatically become an EU citizen, and therefore still is an EU citizen.”

READ ALSO: How Brits can prove their post-Brexit rights in Germany before they get their residency card

Although similar cases have arisen, the European Court of Justice (ECJ) in Luxembourg has so far not ruled explicitly on this point. There’s a possibility that Berlin will refer this question onto the ECJ.

A ruling in favour of this stand point would have massive implications for Britons both at home and abroad.

Bristow said he has always maintained that he is an EU citizen – and that’s why he stood in the district elections.

“I’ve understood that the authorities have taken a different view to whether or not I’m eligible for the election,” he said. “But because it’s such an important issue, I have thought throughout that this does need to go to the ECJ to have this question settled once and for all.”

Alexandra von Westernhagen, who, together with Professor Joshua Silver as the lead plaintiff, initiated a similar case from the UK in April 2020 that is currently before the ECJ, said: “Having been conferred, EU citizenship is a fundamental, individual right, which according to applicable EU law as well as the European Human Rights Convention cannot be removed without any due process. EU citizenship therefore is not automatically lost when the country of origin leaves the Union.”

Paul Loeper, Co-Chair of Volt Deutschland said: “We unequivocally criticise the exclusion of Matt Bristow from our electoral list on the basis of his British nationality. We regard this decision as being incompatible with EU law. We therefore explicitly support Bristow’s appeal against the decision of the state electoral commission.”

READ ALSO: Everything you need to know about Berlin’s ‘super election day’

Although Bristow’s case is about standing as a candidate in a local election, other rights such as voting, freedom of movement and getting support from EU embassies while abroad are also linked to holding EU citizenship.

“There are a whole other range of rights connected to EU citizenship which millions of people are reliant on. I think it’s broader than just the 66 million UK citizens, although clearly it’s partly about them,” said Bristow.

“Is it really worth the paper it’s written on? Or is it a kind-of PR stunt, is it no more than national citizenship or does it actually have its individual status and rights. And is the EU prepared to stand up for its citizens? That’s the crux of the issue.”

Bristow reiterated that this question is not simply a Brexit topic.

“This is a European Union issue, and it’s about the relationship between the EU and it’s own citizens and I think that’s a really important point.”