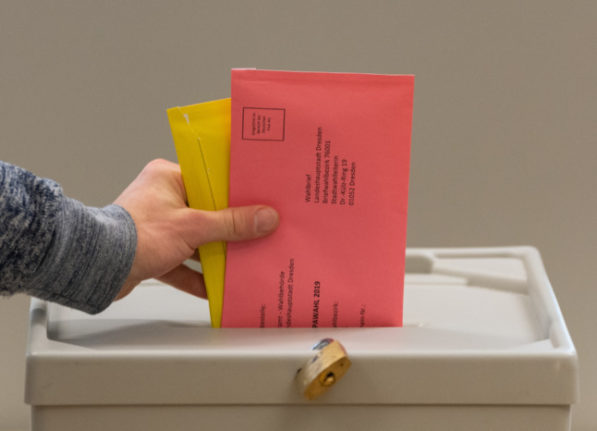 A man drops his voting slips into the ballot box. On September 26th, Berliners will decide on three key elections, and one historic referendum. Photo: picture alliance/dpa/dpa-Zentralbild | Robert Michael

That’s the day of the federal elections, right?

That’s right – on September 26th, Germans all over the country will be going to the polls to decide which party, or parties, will be next to lead Europe’s largest economy. With the highly popular Angela Merkel stepping down after 16 years as Chancellor, some believe that German politics is in line for a shake-up – and recent polls suggest that a coalition without the Christian Democratic Union (CDU) could be possible for the first time in more than a decade and a half.

But that’s not all that’s happening in Berlin on the day of the Bundestagswahl (federal elections). September 26th has been branded a ‘Superwahltag’ in the German capital, since eligible voters will also be asked to decide on two regional elections.

Every five years, Berlin elects its representatives at the state and district level – and this year both elections are on the same date as the Bundestagswahl. So Berliners will also be electing their new representatives for the House of Representatives (AGH) and the 12 District Assemblies (BVV), which are responsible for governing each of Berlin’s boroughs.

What else is happing on the ‘Superwahltag‘?

The long-awaited referendum from the ‘Expropriate Deutsche Wohnen & Co.’ campaign is also taking place on the same day, giving eligible Berliners the chance to decide the fate of the city’s largest landlords.

The issue is being put to a referendum after the campaign to place Deutsche Wohnen and other large property owners in public hands collected almost 360,000 signatures for its petition, breaking all previous records for Berlin petitions. This is almost double the 175,000 threshold needed for a petition to be put to a public vote. The campaign has gained momentum this year after the rental cap (the Mietendeckel) was declared unconstitutional by the highest court in Germany. Asking rents have risen by an incredible 42 percent in Berlin in the last five years alone, and activists believe that putting 240,000 privately owned properties under state control could help short-circuit the dizzying rise in rental costs, while also protecting tenant’s rights.

However, the current Berlin Senate is critical of the campaign, claiming that the seizing of private property would be “uncharted legal territory” and that the move would be prohibitively expensive.

That all depends on the election.

International residents of Berlin are able to vote for on who will represent their borough in the District Assemblies, but they must be citizens of another European Union country, have a registered address in Berlin, and be at least 16 years old.

How do I vote in each election?

The first thing to note is that polling stations are only open from 8am until 6pm on Sunday, September 26th, after which the votes will start being counted. However, if you don’t fancy spending part of your weekend at the polls, you can also apply for a postal vote at your local Bezirksamt, which should be posted the day before the election at the very latest.

READ ALSO: EXPLAINED: How to cast a postal vote in the German elections

In order to balance out the seats in parliament so that the party that wins the most votes also has a parliamentary majority, each party is also granted a number of seats based on the proportion of votes they get in the second vote. Parties must receive at least five percent of the votes to enter parliament. A voting slip explaining the two-vote system in the state elections: one for the party, and one for the candidate. Photo: picture alliance/dpa/dpa-Zentralbild | Patrick Pleul

In the elections for the House of Representatives, voters essential pick Berlin’s state parliament, which is responsible for governing the city-state and creating its laws. Once again, voters in this election have two votes: one for a party at the state level and one for the direct candidate in the constituency. In order to enter the House of Representatives, a party must receive at least five per cent of the electoral votes.

This year, Berlin mayor Michael Müller (SPD) will be stepping down in order to run as a candidate in the federal elections, rather than the regional ones. That means that the city will see at least one new face in the state parliament shortly after the elections.

The District Assembly takes care of local matters, such as green spaces and parks, school buildings, education centres and youth clubs. In these elections, voters only get a single vote, which is used to vote for the party they want to see in their District Assembly. Parties need at least three percent of the vote to be elected.

For the referendum, eligible voters will be asked to decide whether landlords with more than 3,000 flats will be taken into public hands in return for financial compensation – and a simple tick for ‘yes’ or ‘no’ will suffice. However, for the referendum to be passed, at least a quarter of eligible voters (which equates to around 617,000 Berliners) must vote yes, and the ‘yes’ vote must also win the majority of votes overall (i.e. more than 50 percent).

If it clears both these hurdles, the campaign to expropriate the biggest Berlin landlords will face yet another one: convincing the newly elected House of Representatives to pass the law. While a successful referendum means that the city’s residents have called upon the government to implement the legislation, the final decision on the matter – and how to go about it – is ultimately up to the governing parliamentarians.