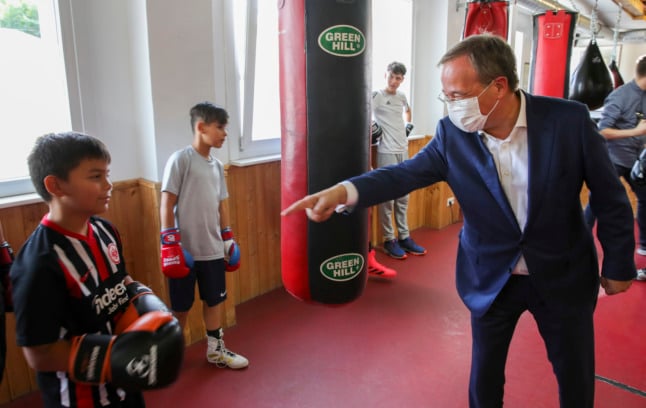 Laschet, 60, once a frontrunner in the race, is now on the back foot as he begins his delayed tour with a dialogue with youths attending a boxing training camp.

The visit in Frankfurt coincides with latest opinion polls showing that backing for Laschet’s CDU-CSU alliance has fallen another three points to 23 percent.

The drop — a precipitous 13 points since the beginning of the year — leaves the conservatives just three points clear of the Greens and four points ahead of their current coalition partner Social Democrats.

“Shocking polls,” exclaimed Bild daily as it pointed out that the results could mean any variety of coalition emerging following the September 26 elections. And that includes combinations leavin Merkel’s conservatives out of the ruling equation.

Laschet, who secured the conservatives’ nomination after a damaging battle with the leader of sister party CSU, Markus Söder, began his quest for the chancellery already under pressure from within his own alliance.

A whiff of discontent from Soeder’s camp and disunity among the ranks had threatened to derail Laschet’s bid for Germany’s top job.

But Laschet subsequently benefitted from a slump in support for the Greens’ Annalena Baerbock after she was ensnared in a series of scandals including plagiarism allegations.

#BTW21 is getting more interesting. Polls suggest there is a chance for a majority without @CDU and @fdp pic.twitter.com/rn2QMQy2y5

Yet the tide dramatically turned against Laschet in mid-July, when deadly floods struck western Germany, washing away homes, businesses and critical infrastructure.

As state premier of North Rhine-Westphalia — one of the two hardest-hit regions, the conservative candidate was propelled to the frontline of the disaster response.

His visits to the flood-hit zones however have been marked by serious missteps that have left him sinking in the polls.

In the immediate aftermath of the disaster that claimed at least 190 lives, Laschet was caught on camera joking and laughing with local officials as German President Frank-Walter Steinmeier paid homage to victims.

Another more recent visit ended with residents accusing him of failing to offer rapid and concrete aid. He was also widely mocked for wearing inappropriate dress shoes to the disaster zones.

Amid Laschet’s woes, the Social Democrats’ candidate Olaf Scholz, who is also Germany’s finance minister, has emerged as a dark horse in the race for the chancellery. Previously largely written off because it was left seriously trailing by the ecologist Greens, the centre-left party is now eyeing a revival, with the latest polls showing it gaining three percentage points.

And Scholz is topping the popularity charts of potential chancellors, at 26 percent while Laschet is languishing at 12 percent.

“The battle is open,” said SPD general secretary Lars Klingbeil, saying that both Laschet and Greens’ leader Baerbock had made “serious mistakes”.

“People are asking themselves who is serious enough and sincere enough to lead this country. And we want to convince them on that point,” he said.