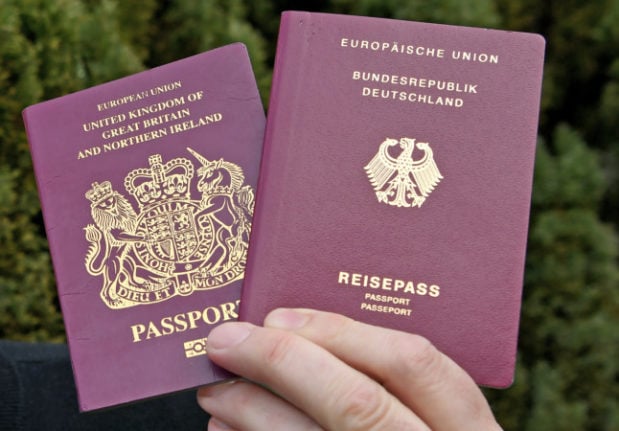 Many Brits are reliant on their post-Brexit residence card to prove their rights - but a large proportion haven't received it yet. Photo: picture alliance/dpa | Holger Hollemann

Since the UK left the European Economic Area (EEA) at the end of 2020, ending the free movement of Brits in the European Union, many British people in Germany have faced a long and stressful wait for proof of their status.

Though the rights of British people who were living in Germany before January 1st 2021 are assured under the Brexit Withdrawal Agreement, it’s not easy to prove it without the Aufenthaltstitel-GB: the special residence card issued to Brits in Germany after Brexit.

In a survey conducted by The Local in June, around a quarter of respondents said they hadn’t yet been offered an interview for their new residence title, while 48 percent of people who had attended the interview hadn’t yet received their card.

READ ALSO: Postcode lottery: Brits in Germany on what it’s like to apply for the post-Brexit residence card

In the meantime, life has continued, and some Brits who have applied for new jobs, freelance work or social support have found themselves in a bind.

Most employers want to see evidence that their new hire has the right to work in Germany. And if they haven’t kept up with the latest on Brexit, they may be unaware that Brits who arrived in the country before 2021 have their rights guaranteed – with or without a card to prove it.

The situation may be a stressful one, but according to citizens’ rights experts, it’s not insurmountable. Here’s what to do if your employer is asking you for a document you just don’t have yet.

The most important thing to understand is that, unlike a visa, none of your rights as a Brit in Germany are dependent on the card itself. Though it’s an incredibly useful piece of I.D. to have, the Withdrawal Agreement specifies that UK citizens who arrived before the cut-off date (January 1st, 2021) have the right to live and work in Germany indefinitely.

In addition, the Ministry for Labour and Social Affairs (BMAS) this year issued a memorandum to employers advising them not to ask for proof of their rights or status until the end of the year.

“Until the end of 2021, you can trust a statement by UK nationals and their family members to have a right of residence under the Withdrawal Agreement,” the notice says. “You can at least always assume that this is the case if the entitled employee was living in Germany on 31st December 2020.”

If an employer or job centre employee is asking for your official documentation and you don’t have it to hand, it may be worth sending them a link to the official advice for employers from BMAS (in both English and German) and gently reminding them of your Withdrawal Agreement (WA) rights, which were passed into German law last year.

As a gesture of good faith, you could also offer to show some form of proof that you were here before the cut-off date – such as your registration (Anmeldung) in Germany – and are therefore covered by the WA. Another option, according to citizens’ rights group British in Germany (BiG) is to get in touch with your local Foreigners’ Office (Ausländerbehörde) and explain the urgency of your situation.

“If the employer is digging their heels in and if, for example, the individual has not yet been to their appointment at the Ausländerbehörde or has not received the card yet, then I would also suggest that they contact the Auslaenderbehörde again and see whether the appointment can be held urgently and/or whether the Behörde can issue a letter stating explicitly the right to work,” BiG’s Alison Jones told The Local.

If the discursive approach doesn’t work, BiG recommends getting help from specialist groups set up to support Brits with their post-Brexit residence issues.

“If people are experiencing difficulties with their employers, I would recommend they contact either one of the UK Nationals Support Fund services set up to support British citizens with the residence process,” said BiG’s Matt Bristow.

“For people in Bremen, Hamburg, Niedersachsen and North Rhine-Westphalia that is SSAFA, and for the rest of Germany it is the International Organisation for Migration (IOM).”

Jones agrees that the UK Nationals Support Fund could be a sensible first point of call when asking for help.

“It can be a really frightening situation for someone to be in, and people may be afraid of getting into an argument with their employer so may want to look for ways to handle it that do not feel like an escalation,” she explained. “Contacting the UKNSF organisations does not have to be an escalation in any way whereas the Betriebsrat or the Ausländerbehörde conceivably might be.”

While it’s unlikely to come to this, if you’re facing genuine difficulty with an employer after Brexit, it could be worth seeking guidance or representation from a legal expert. Brits whose rights are assured under the Withdrawal Agreement are entitled to jobseekers’ support and other benefits. Photo: picture alliance/dpa | Oliver Berg

“Depending on what the workplace is like, people might consider talking to their Betriebsrat,” said Jones. “It is quite possible that they will know nothing about the Withdrawal Agreement, but they should be prepared to look at the documentation including the advice to employers and, if necessary, to advise on or help the employee represent the position to management.”

If you’re already employed and your workplace has a trade union, you could also consider contacting your union representative, adds Bristow.

It’s possible that your local Employment Agency (Arbeitsagentur) may be able to assist if you’re unable to work due to Brexit-related issues – and it’s important to remember that Brits who are covered by the Withdrawal Agreement are eligible for benefits and jobseekers’ support.

“I don’t actually know whether there would be any action the Employment Agency could take, although it would at least start to protect the position in case the work contract is terminated,” says Jones.

If you’re facing difficulties with your employer due to Brexit, Bristow recommends speaking to BiG so that authorities can be made aware that this is happening – and potentially take steps to fix it.

“Whilst we can’t provide the individual support that SSAFA and IOM do, we do feed back trends to the British Embassy and the German authorities,” he said. “It really helps for us to know where people are and who they work for.”

First the good news. The European Union is set to decide to extend free roaming until 2032, so if you have your phone contract registered in an EU country you don’t have to worry about extra charges.

In addition to waiving the charges, the new regulation aims to ensure that travellers benefit of the same quality of service they have at home when travelling within the EU. If they have a 5G contract, for instance, they should also get 5G through the EU if possible.

Under new rules, travellers should be given information about access to emergency services, including for people with disabilities.

Consumers should also be protected from prohibitive bills caused by inadvertent roaming on satellite networks when travelling on ferries or aeroplanes.

The final text of the new regulation was provisionally agreed in December. The European Parliament and Council will formally endorse it in the coming weeks.

Customers of UK mobile phone operators face higher fees when travelling in Europe this year, as some companies are bringing back roaming charges for calls, text messages and data downloaded during temporary stays in the EU.

This is one of the many consequences of the UK withdrawal from the European Union. Because of Brexit, the UK is no longer part of the EU’s “roam like at home” initiative which was designed to avoid shocking bills after holidays or business trips abroad.

The EU’s roaming regulation allows people travelling in the European Economic Area (EU countries plus Norway, Iceland and Liechtenstein) to make calls, send texts and browse the web using their regular plans at no extra cost. Switzerland is not part of the scheme, although some mobile phone providers offer roaming deals or special prices to cover travel in Switzerland.

The regulation was adopted for an initial period of five years and is due to expire on June 30th 2022. But the EU is preparing to extend it for another ten years. This time, however, the UK will not be covered.

Which UK companies are reintroducing charges?

Three major UK network operators this year will reintroduce roaming charges for travels in the EU.

As of January 6th 2022, Vodafone UK will charge customers with monthly plans started after August 11th 2021 £2 per day to roam in the EU. The amount can be reduced to £1 per day by purchasing a pass for 8 or 15 days. Free roaming continues for earlier contracts, Data Xtra plans and for travels to Ireland.

From March 3rd 2022, EE will also charge £2 per day to roam in 47 European locations, Ireland excluded. The new policy will apply to plans started from July 7th 2021. Alternatively, EE offers the Roam Abroad Pass, which allows roaming abroad for a month for £10.

Another operator that announced a £2 daily fee to roam in the EEA, except for Ireland, is Three UK. The charge will apply from May 23rd 2022 for plans started or upgraded since October 1st 2021. The data allowance in monthly plans that can be used abroad is also capped at 12 gigabytes.

O2 already introduced in August last year a 25-gigabyte cap (or less if the plan’s allowance is lower) to data that can be downloaded for free while travelling in Europe. Above that, customers are charged £3.50 per gigabyte.

Other mobile operators said they have no intention to bring back roaming charges in the short term, but if won’t be surprising if they do so in the future.

Sue Davies, Head of Consumer Protection Policy at UK consumer organisation Which? was disappointed at the changes and urged the UK and EU to “strike a deal on roaming charges” to stop companies “chipping away at the roaming benefits customers have become used to” and “prevent the return of the excessive charges people used to encounter.”

By law, charges for mobile data used abroad remain capped at £45 per month and consumers can only continue data roaming only if they actively chose to keep spending.

What about EU residents travelling to the UK?

In the EU, most mobile phone operators seem keen to continue free roaming for travels to the UK, but some have announced changes too.

In Sweden, Telenor aligned UK’s prices to those of non-EEA countries on May 1st 2021 while still allowing free roaming for some plans.

Another Swedish operator, Telia, ended free roaming with the UK and Gibraltar on September 13th 2021 giving customers the option to access 200 megabytes of data for SEK 99 per day. People travelling to the UK can also buy a weekly pass allowing to make calls, send texts and download 1 GB of data.

In Germany Telefónica Deutschland and 1 & 1 have extended current conditions for the UK until at least the end of 2022. However companies may keep other options open depending on negotiations with roaming partners.

A1 Telekom Austria brought roaming charges back for the UK last June. Customers now have to pay €2.49 per minute for outgoing calls and €1.49 per minute for incoming calls if they are in the UK or Gibraltar. An SMS costs 99 cents and each 100 KB of data €1.49.