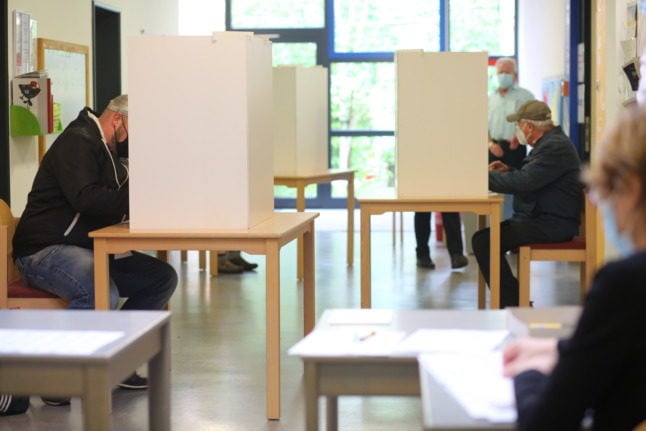 Voters take to the polls in Saxony-Anhalt to pick their new parliament on June 6th, 2021. Photo: picture alliance/dpa/dpa-Zentralbild | Matthias Bein

If you’ve been in Germany a while, you may have learned a little bit about the country’s electoral system and may have even gone to the polls to pick your town mayor or council representatives.

For many people, however, navigating all the different types of Wahl (election) can feel like a bit of a headache – not least because of Germany’s federal system and numerous levels of government, from the European Union down to local administrators.

If you’d like to put your ballot where your mouth is and get involved in German politics, there’s no better year than a the ‘super election year’ of 2021 to do it. Before you start poring over each of the parties’ manifestos, though, you’ll need to know the basics of the country’s political system.

Here’s a rundown of the different types of elections and – most importantly – who’s able to vote in them.

What types of elections are there in Germany?

Who can vote in each type of election?

In the parliamentary and state elections, only German citizens are allowed to vote.

Nationally, the minimum voting age is 18, so only German citizens aged 18 and over are allowed to take part in the federal parliamentary elections. The same applies in most areas for the state elections though Brandenburg, Schleswig-Holstein, Bremen and Hamburg allow over-16s to vote, as long as they are German passport-holders. A vote is placed in a state election. In Brandenburg, Schleswig-Holstein, Bremen and Hamburg, anyone over the age of 16 can vote for their regional parliament. Photo: picture alliance/dpa/dpa-Zentralbild | Jan Woitas

Once again, the voting age varies when it comes to municipal or local elections, though in general, any EU citizen over the age of 16 can vote. Saxony, Saarland, Rhineland-Palatinate, Hesse and Bavaria are the exceptions to this rule: in those states, only over-18s have a say in picking the next council or local mayor.

Over-18s are allowed to vote in European elections.

Why is 2021 such a major year for German politics?

You may have heard 2021 described as a ‘super election year’ in Germany. That’s because, as well as the crucial parliamentary elections on September 26th, a number of state elections are taking place this year as well.

So far, Baden-Württemberg, Rhineland-Palatinate and Saxony-Anhalt have elected their state parliaments, with Mecklenburg-Western Pomerania, Berlin and Thuringia all going to the polls on the same date as the general elections.

This year is also a particularly decisive year for politics because long-standing Chancellor Angela Merkel will be retiring in autumn, meaning that Germany will be getting a new chancellor at the helm for the first time in 16 years.

For Brits in Germany, September will mark the first parliamentary election since the UK left the European Union on February 1st, 2020. Tens of thousands of Brits opted to secure a German passport before the country left both the European Union and the European Economic Area (EEA), so this new cohort will be taking part in the German Bundestagswahl and Landtagswahlen in their home states for the very first time.

READ ALSO: How Brexit pushed thousands of Brits to get German citizenship