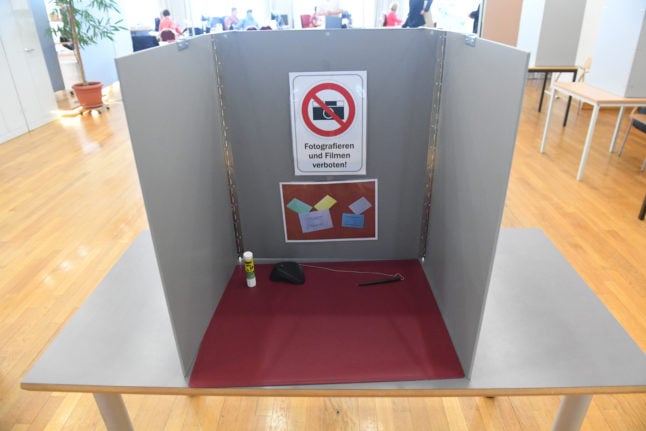 A voting booth in Greifswalf, Mecklenburg-Western Pomerania in 2019. Photo: DPA

2021 is a so-called ‘Superwahljahr’ (or Super Election Year) in Germany. The term has been given when several state elections occur in the same year – this is the first time there’s been such a busy election year since 2011.

Not only are six states choosing new parliaments, but German-wide elections are also taking place in September. Chancellor Angela Merkel is stepping down after 16 years at the reigns as chancellor.

READ MORE: Life after Merkel: Is Germany ready to think about what’s next?

Each of Germany’s 16 states elects a new parliament every five years. The states where residents will go to the polls this year are: Baden-Württemberg, Rhineland-Palatinate, Saxony-Anhalt, Thuringia, Mecklenburg-Western Pomerania and Berlin.

Here are the dates when all states will be voting:

September 26th: Mecklenburg-Western Pomerania, Berlin and Thuringia (which was originally scheduled for April 25th 2021 but postponed due to the pandemic)

In 2022, the following states will hold their elections:

Local elections in Lower Saxony and Hesse in 2021

The 66-year-old Angela Merkel will not run again for the 2021 Bundestag election. After four legislative periods and 16 years, she will now relinquish the chancellorship. Who will succeed her will be decided on September 26th 2021.

A top candidate for her centre-right Christian Democratic Party (CDU) has not yet been determined for the Bundestag election but it may be the new CDU leader Armin Laschet or leader of the CDU’s Bavarian sister party, the CSU, Markus Söder.

READ MORE: Germany after Merkel: Does the new CDU leader have what it takes to be future chancellor?

The centre-left Social Democrats (SPD) are sending Finance Minister Olaf Scholz (SPD) into the race to run as the next chancellor.

Even the Greens are debating whether party leaders Annalena Baerbock and Robert Habeck would be “fit” for Chancellor.

Why will the elections be so expensive this year?

Due to the coronavirus crisis, the Bundestag election could be more expensive than ever before. The Interior Ministry estimates that the election on September 26th will cost a total of €107 million, the Saarbrücker Zeitung newspaper reported in February.

One of the reasons given by the ministry was that significantly more postal voters are expected because of the pandemic. This would put the costs above the €100 million mark for the first time in the history of the Federal Republic. The 2017 election cost €92 million.