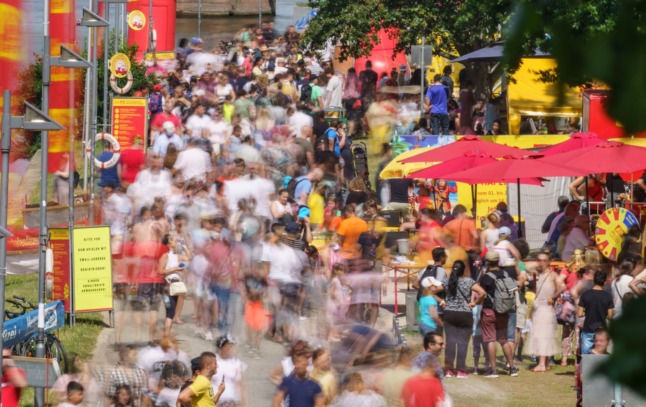 As Germany grapples with rising Covid infection rates, a fresh debate has been sparked over possible new curbs – and who they should apply to. But the country is already deeply divided on the issue.

Although German authorities have insisted there are no plans to bring in compulsory vaccinations, we’ve already seen signs that the country will come down harder on people who choose not to get their jabs. Politicians said earlier this month they would not rule out charging unvaccinated people for Covid tests for future.

But the topic moved further at the weekend when Chancellor Angela Merkel’s chief of staff Helge Braun said that if infection rates in Germany become too high, people who have been vaccinated against Covid-19 may be the only ones allowed to enter restaurants, cinemas or stadiums.

”In the event of a high infection rate despite testing, unvaccinated people would have to reduce their contacts,” he said.

“That could also mean that certain things, such as visiting restaurants, cinemas and stadiums, would no longer be possible even for unvaccinated people who have been tested because the residual risk is too high,” he said, adding that this would be permitted by law.

On Monday Germany reported 958 new Covid cases within the last 24 hours, and three deaths. The incidence rate climbed to 14.3 infections per 100,000 people within seven days. It has been steadily rising for the last few weeks from the lowest point of 4.9 cases per 100,000 people on July 6th.

As you can imagine, the reaction is mixed. Ordering parts of the population to follow rules is controversial and would be difficult to check. The aim is to encourage people to get vaccinated.

“This is not discrimination against the unvaccinated,” said Interior Minister Horst Seehofer (CSU) in an interview with RTL/ntv.

He said that he respects a person’s decision not to get vaccinated.

“But the person who has not been vaccinated must also realise that we have to protect society as a whole and therefore can only allow those who have been vaccinated to attend major community events,” Seehofer said.

Seehofer, however, spoke out against mandatory vaccines in Germany.

“We have to convince people to get vaccinated,” he said. Seehofer added that being inoculated should not be made a prerequisite for things like employment or for signing an insurance contract. “We must not start that in Germany,” he added.

There is no reason to continue depriving vaccinated and immune people of their basic rights “just because a few eternal sceptics are opposed to vaccination”, Montgomery told the newspapers of the Funke Mediengruppe.

“Helge Braun is absolutely right. After all, it’s not about privileges for vaccinated people, but about restrictions on fundamental rights.”

The Left Party’s Janine Wissler, also opposed Braun’s proposal. She said threatening people who have not yet been vaccinated with disadvantages is the wrong way to go, especially since there are still is no recommendations for some groups – such as pregnant women and those under 12 – to get vaccinated.

But medical expert Montgomery hit back: “Only by vaccinating can we all regain our freedoms. The FDP – the supposed party of freedom – should also understand that.”

Will there be new lockdown measures?

Health Minister Jens Spahn recently said he did not expect tough measures to be introduced in Germany for vaccinated people as long as there are no mutations that impact protection from vaccines.

But with rising Covid rates, people in Germany are worried that their lives will be impacted severely again. Germany was in a state of shutdown from November 2020 to May this year.

The German Hotel and Restaurant Association (DEHOGA) called on the government to develop new decision-making criteria for assessing the infection situation.

“Massive restrictions for society as well as for the economy can no longer be justified on the basis of high incidences alone,” chief executive Ingrid Hartges told the Funke Mediengruppe on Monday.

Other factors, such as the vaccination rate, the development of the course of the disease, the hospitalisation rate and the mortality rate, have to be taken into account, she said – ideally nationwide.

The government has signalled that it will take other factors into account when deciding on curbs in future.

Over the weekend, some German regional leaders said they wanted to hold crunch talks on the Covid situation earlier than planned. The meeting is scheduled for the end of August but Chancellor Merkel said last week she was open to holding it earlier.

Anything else on the table?

There is generally no taste in Germany for following other countries, such as France, and bringing compulsory vaccinations for groups of the population – like healthcare workers.

“I don’t think this is the right way to go in Germany, but it’s clear that we have to act,” FDP party leader Christian Lindner said on Monday, referring to the “rising, but not yet threatening” Covid case numbers. Lindner instead called for a continuation of the testing strategy.

“Test-based opening concepts have already proven their worth in the past during the last waves,” the FDP leader stressed. These are “a way for us to keep social life open in the fall as numbers rise.” There must be a “political guarantee” that a new lockdown will be ruled out, Lindner demanded.

He also suggested expanding the use of mobile vaccination teams and reassessing the pandemic.

“The focus on incidence, as we are currently experiencing again in the public debate, has not been convincing for a long time,” he said.