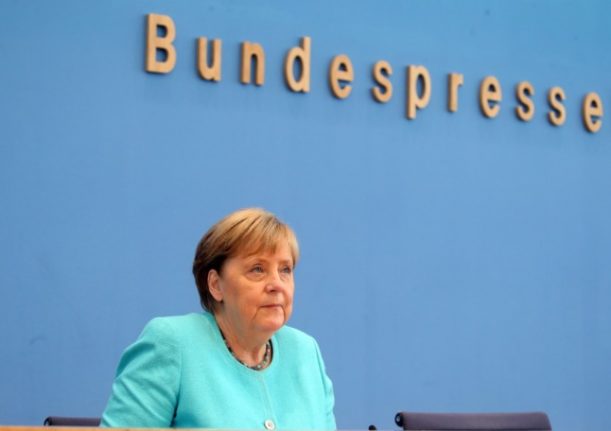 “The infection figures are rising again and with a clear and worrying dynamic,” Merkel said in one of her last federal press conferences before she steps down at the September election.

“We are seeing exponential growth,” she said, adding that the Covid fourth wave is already emerging.

Germany has seen low infection numbers over the summer compared to many of its European neighbours, but cases have been creeping up over the past two weeks, largely fuelled by the Delta variant.

The Robert Koch Institute (RKI) health agency on Thursday recorded 1,890 new infections over the past 24 hours and an incidence rate of 12.2 new cases per 100,000 people over the past seven days — up from a low of 4.9 in early July.

Merkel said she expected cases to double in the next two weeks. “With a rising incidence rate, it could be that we need to introduce additional measures,” she said. She did not rule out pulling forward a meeting with state premiers scheduled for the end of August if it was needed.

Merkel said she wanted to use her appearance on Thursday to promote Covid vaccinations. She said “every vaccination… is a small step towards a return to normality”.

“Vaccination not only protects you, but also someone near you, someone you love,” she said. “Vaccination also protects against the measures [that restrict] our everyday lives…the more vaccinated, the freer we will be – individually but also as a community.”

The only way out of the pandemic in the long run, she said, is vaccination. “The more people are vaccinated, the more are protected against a severe course (of Covid),” she said.

Merkel urged people to talk to each other about vaccination “at the workplace, at the football field” to encourage everyone to get their jabs. She said she was calling on “everybody already vaccinated to convince the others to do it as well”.

🇩🇪 Here we go…this is Chancellor Angela Merkel's traditionnal summer press conference – a very special one as this will be her last one after 16 years in power. pic.twitter.com/oEJjIw0jsi

Higher vaccination rates now make it possible to deal with higher infection rates, she said but added: “Preventing the health system from being overburdened remains the guiding principle for our actions.”

Germany began easing pandemic restrictions in May and has now reopened restaurants, shops, pools and museums, as well as easing limits on public and private gatherings.

As of Thursday, 60.4 percent of Germans had received one jab against Covid-19, with 48 percent fully vaccinated.

Merkel said there would be joint effort from the whole country to deal with the severe weather disaster in western Germany.

“We will need considerable effort to repair all this damage,” said Merkel. She talked about the terrible devastation from the flooding, and how Germany was mourning the loss of more than 170 lives.

The goal is to jointly finance the flood damage, Merkel said. The German government is setting aside €400 million in emergency aid. In the coming days and weeks discussions will be held with German state premiers on how to organise a joint reconstruction fund, Merkel said.