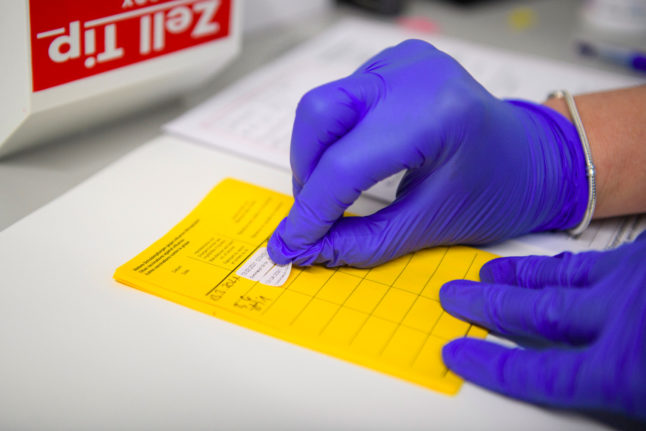 Germany has passed new measures that mean groups of people who are considered to hold immunity against Covid-19 do not have to follow some health protection rules.

It means people who have been vaccinated and those who’ve been sick and have now recovered from Covid-19 won’t have to stick to social contact rules or curfews.

The new measures come into force on Sunday May 9th.

Ok so how do I prove if I’ve been vaccinated?

The German government says vaccinated people “must present proof of complete vaccination protection – for example the “yellow vaccination certificate”. The pass is pictured below.

If you’ve had the Covid-19 jab, you can get the Impfpass or vaccination card/certificate signed by the doctor who does it. These small booklets are yellow in colour, and you can ask for them from a doctor or pharmacy. They usually cost a small fee, such as €1 or €2. They are used to document all vaccinations given (not just the Covid-19 vaccine) so can be used for any future vaccinations you may get.

The proof of vaccination against coronavirus SARS-CoV-2 can be in German, English, French, Italian or Spanish, and in paper or digital form, according to the new regulation.

Germany is also set to make the vaccination pass digital. Health Minister Jens Spahn said earlier this week people will soon get a printout of the vaccination certificate which will include a QR code that can be scanned into a phone (more on that below).

The vaccine itself will have to be approved for use in the EU, which means BioNTech/Pfizer, Moderna, Astrazeneca and Johnson & Johnson all count – but Russia’s Sputnik V currently does not. This may of course change in future.

This means if you’ve had your vaccination abroad, it can still count as proof – as long as it meets these requirements.

The German government also says that you “must not have any symptoms of a possible Covid-19 infection” when exercising the new freedoms. These include shortness of breath, coughing, fever and loss of small or taste.

People are considered fully vaccinated from the 15th day after the second jab. That means you have to wait until two weeks after your second injection before the rules are eased for you. Note that if you get the Johnson & Johnson vaccine you only need one dose.

You may also be required only to have one dose of a vaccine if you’ve previously had Covid. How do you prove you’re recovered from Covid-19?

People who have recovered from coronavirus and were infected no more than six months ago also face less restrictions.

Those who have recovered require proof of a previous infection with the SARS-CoV-2 coronavirus in German, English, French, Italian or Spanish, in paper or digital form.

The test must have been a PCR test (or similar), checked in a lab and taken at least 28 days ago, and be no older than six months.

An antibody test is not sufficient because antibodies can decrease over time.

About 31.5 percent of the population had received at least one jab up to May 6th, and 8.8 percent had been fully inoculated – meaning nearly 9 percent of people are currently eligible for increased freedoms.

But that doesn’t include the people who have recovered from the virus within the prescribed time frame, which could be tens of thousands of people.

Germany plans to allow all adults to book an appointment for a jab in June.

Why are restrictions being eased for some people?

Politicians in Germany believe it is of extreme importance to give people back their basic rights as soon as possible. Germany has now been in a state of shutdown for over six months now, so the majority of residents are – unsurprisingly – frustrated.

German government spokesman Steffen Seibert earlier this week said it was not about granting privileges to those who had received the vaccine but “giving them relief and waivers… from certain restrictions, as is due to them under their constitutional rights”.

The government says that the latest scientific findings show people who’ve been fully vaccinated and those who’ve had Covid-19 are at a reduced risk of passing the virus on. Being vaccinated can also help you from becoming infected or having a severe reaction to the virus.

The bill echos what’s happening in other countries, including France which is introducing a health pass.

Are there any immediate problems?

Yes. There is of course the moral dilemma of splitting society. It means vaccinated and recovered people will have more freedoms than people who don’t fall into those groups. As young people are likely to be some of the last to get the vaccine, there could be some resentment.

Then there’s the issue of how to check that people are following the rules. Berlin mayor Michael Müller already admitted that it will be “damn difficult to check” the curbs are lifted only to those who fall under these categories.

It also raises questions about getting the vaccine itself. For example, does this put pressure on people to get the jab even though it’s not mandatory?

Are there any other concerns?

Yes. Police have said that fake vaccine certificates are already in circulation. The Police Union (GdP) earlier this week demanded forgery-proof documents that vaccinated and Covid-recovered people could show during controls.

Germany, together with the EU, is planning to introduce a digital coronavirus vaccination pass before the end of June. For those who have already been fully vaccinated, that status is to be transferred from the analogue vaccination certificate.

It is hoped that this will help deal with the problem of forged vaccination cards.