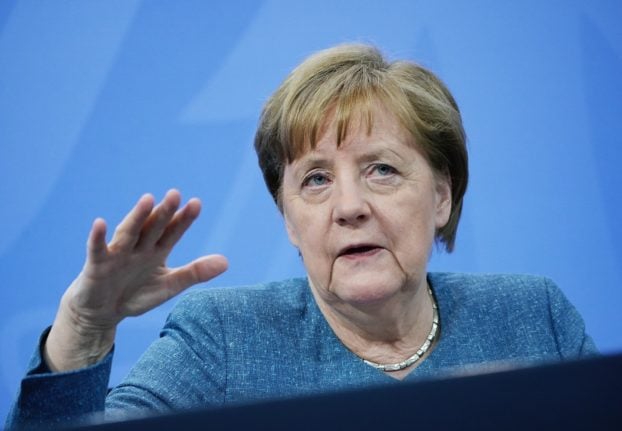 Merkel speaks at a press conference at the vaccination summit on Monday. Photo: DPA

Speaking after talks with the regional premiers of Germany’s 16 states, Merkel said people who have received both jabs should “obviously” be allowed to get a haircut or go into a shop without having to show a negative coronavirus test, and be exempt from quarantining after close contact with an infected person.

The same would apply to people who can prove they have recovered from a coronavirus infection, for instance by showing a positive PCR test that is at least 28 days old.

The government would prepare a decree setting out its proposals, she told a Berlin press conference, which will then be discussed in parliament.

The veteran leader did not give a timeframe for when the relaxations might come into force.

Merkel said the move to give those with Covid immunity back some of their basic rights comes after the country’s Robert Koch Institute (RKI) for infectious diseases recently found that fully vaccinated people and those who have recovered, “no longer pose a relevant infection danger”.

But she warned that Germany faced a “difficult transition phase” as a growing number of people get their shots and will be hungry for more freedoms, while a significant part of the population will still be living with tough restrictions.

Although it was important to give people back their basic rights “as soon as possible”, she said, “we will have to live with the virus for a long while to come.”

According to the Health Ministry, almost six million people in Germany had received two vaccine doses by Sunday, which means they are considered fully vaccinated.

A total of 19.5 million people have received at least one vaccination. The number of those who have recovered is 2.9 million, according to the RKI.

Vaccines will be opened up to all adults

Merkel also reiterated that all adults will be able to apply for a Covid vaccine in June “at the latest”.

Germany has so far followed a strict priority list on who can be vaccinated first, mainly based on age.

But when this is lifted, all adults will be able to apply for a vaccine appointment, said Merkel.

“This does not mean that everyone can then be vaccinated immediately,” she added. “But everyone can apply for a vaccination appointment, and they will then be given one according to the supply.”

In many federal states, priority groups one and two have already been inoculated, Merkel continued. Jabs for group three – which includes those aged between 60 and 69 – are starting.

By and large, it is expected that this group will receive their first jab in May, “so that we can then lift the prioritisation from June at the latest, depending on how many vaccine doses we receive – but I say again: at the latest”, said Merkel.

She also said that in-house company doctors will be increasingly involved in the vaccination campaign from June onwards.

‘Big problems in the present’

On Monday Germany reported a 7-day incidence 175.1 Covid cases per 100,000 people, according to the RKI. There was a total of 12,151 new infections within 24 hours, up by two percent from the previous Monday.

On Saturday national rules including curfews were brought in for Covid-hotspots – dubbed the ’emergency brake’.

“How the emergency brake works depends on how many people comply,” she said. The danger that the health system could become overburdened has not been averted, she added.

READ ALSO: ‘I finally might be able to go home’: What it’s like to get a Covid jab in Germany

Merkel did not want to make any promises about how freely Germans could travel on holiday this summer: “Despite all the hopes we have, we still have big problems in the present,” she said.