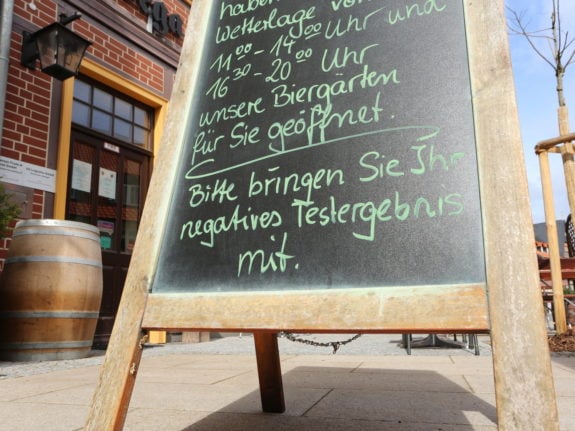 The German Bundestag and Bundesrat have both approved the new measures for the relaxing of Covid-19 rules for people who are either fully vaccinated or recovered from Covid-19.

That means the new freedoms can come into force this Sunday.

About 31.5 percent of the population had received at least one jab up to May 6th, and 8.8 percent had been fully inoculated – meaning just under 10 percent of people would currently be eligible for increased freedoms, not including those who have recovered from the virus.

Here’s what you need to know about the new carve-outs to Covid rules for the vaccinated and recovered.

Under the new law, contact restrictions will no longer apply for anyone who’s either vaccinated against Covid or recovered. It means any number of people can meet if they belong to these immune groups. Currently in areas with more than 100 Covid cases per 100,000 residents in seven days, a household is only allowed to meet with one other person. In other areas two households are allowed to meet with up to five people in attendance.

Further, recovered or vaccinated people won’t be officially counted as part of a social gathering, even in high-incidence areas where households are only allowed to meet with one other person. So if all but one of your friends are vaccinated and you two are still stuck on the waiting list, you can both join their gatherings without worrying about breaking the rules.

In areas with a 7-day incidence of more than 100 infections per 100,000 inhabitants, nationwide emergency brake rules prohibit people leaving the house between 10pm and 5am, other than for exercise (until midnight in most places) or essential reasons like work or a medical emergency.

For those lucky enough to be eligible for the exceptions, there will be no more scuttling home in a hurry after sunset to meet the night-time curfew. Much like the contact restrictions, curfew rules will cease to apply to vaccinated or recovered people, meaning they can happily meet for a midnight drink in a park of their choice – once again, with as many of their vaccinated friends as they like.

Those who understandably decide to jet off on holiday after having their full inoculation will no longer have to present a negative Covid test on their return. Instead, they’ll be asked to present their vaccination certificate. In addition, they won’t have to go into quarantine after entering Germany, unless they’ve knowingly had contact with somebody infected with the virus during their time abroad.

However, there is still requirement to quarantine if coming from a region classed as a virus variant area of concern.

Of course, this may not be a licence to travel without hassle. Though Germany is easing their restrictions for the vaccinated and recovered, other countries may not follow suit, and there could well be demands for negative tests or periods of self-isolation when entering another country.

READ ALSO: When will Germany relax restrictions on international and domestic travel?

According to the law, people who fall into these new “low-risk” groups – the vaccinated and recovered – will be treated in much the same way as those with a negative test. In some states, such as Berlin, people who can present a negative test are entitled to access some services that are otherwise closed to the public, such as hairdressers and non-essential shops. Under the government’s new plans, the same would apply to anyone who’s had their full vaccination or who has recovered from Covid-19. Other than that, there are currently no plans for a special reopening of pubs, restaurants, cinemas, etc., for those deemed to be lower risk. Though some politicians had pushed for wider privileges for these lower risk groups, the government is trying to avoid provoking too much anger among the significant proportion of the population who haven’t had their jab just yet.

The restrictions that mean contactless individual sport is only allowed alone, in pairs or with members of your own household are lifted for those who have been vaccinated and those who have recovered.

General safety rules such as mandatory masks and keeping a distance will still apply to people with immunity.

So, no vaccinated-only club nights?

Not at present, although this is one of the issues that could well crop up over the coming weeks and months, as infection rates fall and Germany’s leisure and hospitality businesses start to reopen their doors.

If states apply the same principle as many have done with hairdressers and other non-essential services, it could lead to a two-tier situation in which only certain groups in the population are allowed to stay in hotels, visit the cinema or go for drinks in a bar. At this point, there could well be trouble for politicians.

How will authorities know who’s entitled to the new freedoms?

Naturally, the authorities won’t just take your word for it that you’re one of the select few. Anyone who wants to take advantage of their new freedoms will have to present electronic or paper evidence – in either German, English, French, Italian or Spanish – that they are fully vaccinated.

Equally, the vaccine itself will have to be approved for use in the EU, which means Biontech/Pfizer, Moderna, Astrazeneca and Johnson & Johnson all count – but Russia’s Sputnik V currently does not.

People are considered fully vaccinated from the 15th day (so, two weeks) after the second dose.

READ ALSO: What you need to know about Germany’s controversial bid to buy Russia’s Sputnik vaccine

Both the federal government and individual states have been mulling over separate rules for the vaccinated for a while – and a handful of states have already introduced their own two-tier systems.

As the nationwide inoculation programme gains pace, Baden-Württemberg, Bavaria, Berlin, Brandenburg, Bremen, Hamburg and Hesse have all opted to offer new freedoms for the vaccinated – in most cases, treating them in much the same way as those with negative tests. Depending on the state, this can mean anything from being able to visiting the zoo to being entitled to book shopping appointments at non-essential shops.

Justice Minister Christine Lambrecht (SPD), one of the leading figures involved in the drafting of the law, has argued that since people who have been fully vaccinated have been shown to pose minimal risk to those around them, restricting their rights is unconstitutional.

“This is not about special rights or privileges, but about a central requirement of our constitutional state,” she told Tagesspiegel. “The constitution only allows restrictions on our basic rights if there is a special justification for this. The protection of life and health in the pandemic is such a justification.” Over the past few months, Germany’s pro-business Free Democrats has been clamouring for vaccinated people to regain their freedoms so that businesses, and public life, are allowed to resume. Now more and more people – including the very young – are finally in line for a vaccination, these discussions have intensified.

The draft law seems to be an attempt to walk a thin line between appeasing those who have pushed for greater freedoms, and ensuring that those who aren’t vaccinated aren’t made to feel like second-class citizens.

What are the issue with the new plans?

Though proponents of the plans say that they are adhering to the German constitution, others believe that the new law could cause difficulties by contracting federal laws that mandate equal treatment of all citizens.

Equally, since the option to receive a vaccination should be a right rather than an obligation, the law must not be seen as a back-door attempt to force more people to opt for inoculation.

Another issue that could arise is that states will be able to diverge from the rules by adding additional freedoms on top of the ones mandated by the federal government, leading to a wide patchwork of rules across Germany.

In any case, expect there to be controversy in the coming weeks as the government thrashes out the specifics of the new rules – and potentially an even larger backlash if two-tier rules are imposed on pubs and restaurants in the summer.