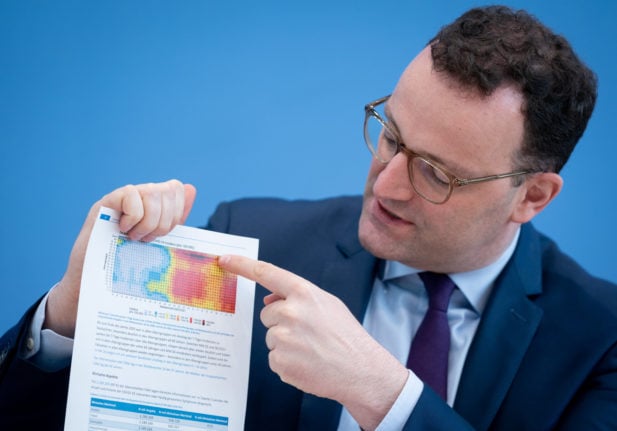 On Friday, the Robert Koch Institute (RKI) reported that the number of new daily Covid-19 cases had dropped in Germany for the fourth day in a row, with thousands fewer new cases than in mid-April.

The number of daily infections has gone down by 3,000 compared to the previous week and now stands at 24,329, suggesting that vaccination efforts and new nationwide restrictions could be having the desired effect.

Authorities are still deeply concerned about high number of Covid-19 deaths, which has remained relatively constant despite the drop in infections. In the latest figures, 306 new deaths were registered, bringing the total number of deaths since the start of the pandemic up to 82,850.

As has been the case throughout the pandemic, there are also large differences in infection rates across regions.

READ ALSO: IN NUMBERS: Where are Covid-19 cases going up (and down) in Germany?

The majority of new reported cases came from North Rhine-Westphalia – the most populated state in Germany – where 5,629 new infections were recorded in a single day. This was followed by the southern states of Bavaria and Baden-Württemberg, which recorded 4,294 and 3,478 new daily cases respectively.

In Berlin – Germany’s largest and most populous city – new infections stood at 742 on Friday, down from 796 on Tuesday. Meanwhile in Hamburg, there were 401, 387 in Munich and 293 in Frankfurt.

Experts do say, however, it is likely that many more coronavirus cases go undetected.

The chart below by Our World in Data shows the daily new confirmed Covid cases in Germany on a rolling 7-day average.

So what does this all mean? According to the latest RKI figures, the national 7-day incidence of Covid-19 infections per 100,000 inhabitants has dropped noticeably since the start of the week. On Monday, the 7-day incidence stood at 169.3, while on Friday morning, this number had sunk to 153.4.

Nevertheless, both politicians and disease experts have been reluctant to sound any notes of celebration just yet.

On Thursday, German Health Minister Jens Spahn appeared in a press conference alongside Lothar Wieler, the president of the Robert Koch Institute, to warn that – despite the recent drop – Covid-19 infections rates were still at a critical level.

“There’s hope, but no all clear,” he told reporters. “The numbers don’t just have to stagnate – they have to fall.”

With worldwide infection rates jumping by 24 percent in a single week, Wieler said the pandemic was clearly “far from over.”

However, with infections rates moving in the right direction, he praised the efforts of individuals in sticking to the latest Covid-19 measures – which include stricter contact rules and curfews in some places – and urged people to remain vigilant over the coming months.

“Let us continue to show solidarity with one another in order to break the third wave – this way we can prevent the un-vaccinated from getting infected at the last minute,” he said.

The news of the drop in Covid-19 comes as the previously faltering vaccination rollout in Germany has started to gain momentum.

With doctors’ surgeries carrying out vaccinations since the start of April and the ironing out of vaccine supply issues, daily vaccinations in Germany reached record levels this week.

On Wednesday, almost 1.1 million doses of vaccine were administered to people in Germany, smashing Europe-wide records for the highest number of vaccinations carried out in a day.

With elderly people first in the queue to receive their first dose of the vaccine, the supercharging of the inoculation campaign has started to be reflected in hospital and infection figures across Germany.

Recent figures from the RKI suggest that hospital admissions for Covid-19 patients have remained relatively steady at around eight percent over the past few months, and have now dropped to four percent.

This seems in large part due the number of over-80s that have now been vaccinated, leading to a major drop in the number of Covid-19 infections in this age bracket. On Thursday, for example, the proportion of the 80 plus age group in new Covid cases was just 2.5 percent.

Past the peak of the third wave?

Though numbers are moving in the right direction, neither vaccinations or emergency brake measures are likely to be a silver bullet, say experts.

During a Covid-19 pandemic advisory committee hearing in the Bundestag, mobility researcher Kai Nagal was hesitant to celebrate the new figures: “I no longer expect an increase, but also not a rapid decrease,” he said.

Physicist Viola Priesemann from the Max Planck Institute for Dynamics and Self-Organization was more optimistic, saying she expected 7-day incidences of less than 50 to follow, given the current speed of the vaccine rollout.

Whatever happens, it’s clear that if the vaccination rollout can keep up the quick pace, it will ease the situation in Germany. We’ll make sure to keep you updated on all the latest developments on the infection and vaccine situation.