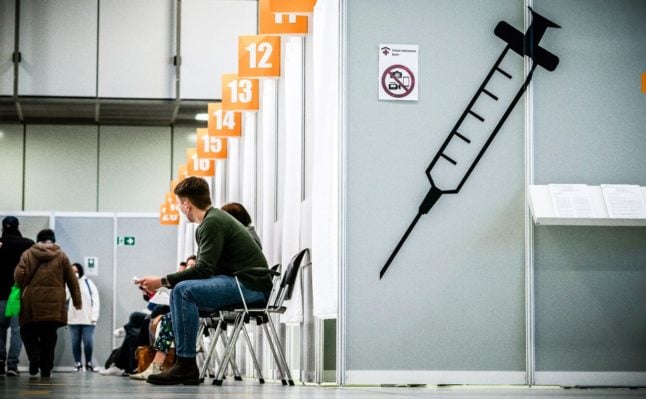 People waiting for a vaccination in Berlin on Monday. Photo: DPA

How many people have been inoculated?

How many people are getting injections every day?

Since the start of April when the German government began allowing doctors to give out Covid-19 jabs, the pace has picked up. However, there are still large differences between days.

The country scored a big success on Wednesday April 7th when a record of more than 656,000 jabs were delivered in a day.

The highest amount of jabs ever given out since the campaign began at the end of December 2020 was on April 14th. A total of 772,206 Covid injections were administered on this day.

However, the numbers can drop considerably on certain days – particularly weekends. On Sunday just 266,784 injections were given out across the country.

Some local authorities have been slammed for not making a bigger effort to carry out vaccinations at the weekend and on holidays. At Easter some states announced they were closing their vaccination centres on the public holidays.

The below chart on Germany’s Impfdashboard (vaccination dashboard) shows the spike in vaccinations when doctors joined the programme at the start of April. You’ll also be able to see how vaccines seem to pick up mid-week but dip at the weekend.

The light blue shows people who’ve had one shot and the dark blue means both doses or fully vaccinated.

The UK by comparison had its most successful day on March 20th when it delivered 844,285 jabs. The availability of vaccines has fluctuated in the country. The seven-day rolling average for the number of vaccinations given out in the UK per day stands at 500,934.

What’s the latest on German states?

There are still large differences in vaccination progress between the federal states.

The front-runners are Saarland and Bremen, where more than 25 percent of the population has been given one dose. At the other end, Berlin has delivered doses to 22 percent of its population, while Hesse is trailing behind, with 21.5 percent of people having received one dose there.

The below map on Germany’s vaccination dashboard shows the full picture of the progress by states and the percentage of people who have had one jab. German journalist Olaf Gersemann wrote on Twitter that in Bremen, Saarland and Thuringia more than a fifth of the 60 plus age group has received a vaccination. However, he notes that Brandenburg did not report any vaccinations on Sunday.

Who can receive a jab right now?

German states are inoculating people aged 70 to 79. Some people in the 60-69 age group are also being vaccinated in areas when there is enough vaccine doses. This will be ramped up in the coming weeks.

Staff in hospitals, doctors’ surgeries, daycare staff, and many teachers, as well as people with certain health conditions are also getting their jabs.

As we mentioned above, adults of any age are allowed to apply for the AstraZeneca jab in the four German states of Berlin, Bavaria, Saxony and Mecklenburg-Western Pomerania.

However, it will depend on a detailed consultation with a doctor and availability of vaccine doses.

READ MORE: Can I get the AstraZeneca vaccine in Germany if I’m not on the priority list?

The aim is to offer every adult in Germany a Covid-19 vaccine by September 21st.

How can Germany speed up the vaccine rollout?

This week there is expected to be a big boost to the rollout as family doctors are set to receive three million doses a week.

Since the beginning of April they have received around 940,000 a week.

Anecdotally, we’ve heard that specialist doctors in Berlin – not just GPs – are also starting to order vaccine supplies to give out to patients as more become available.

The vaccine summit on Monday is looking at what freedoms vaccinated people should get. Politicians will also address how to speed up the campaign. They will look at questions such as:

– When can more specialists and company doctors get involved in the rollout?

– How long should the priority list be in place? Federal Health Minister Jens Spahn said last week it should be lifted in June so that all adults are offered the jab – but warned that doesn’t mean everyone can get one immediately.

READ ALSO: ‘We won’t be able to vaccinate everyone in June’ warns German health minister

– Why are many elderly and sick people still waiting for a vaccination appointment due to bureaucratic failures in some places?

The Bavarian state premier furthermore proposed to completely release all vaccines as early as May and also to increasingly vaccinate schoolchildren over the age of 16.

“We need company vaccinations, we need family vaccinations,” said the Bavarian premier on Sunday to broadcaster ARD, referring to the situations in which he said the infection was prone to spread the quickest.

On Monday car manufacturer Daimler said it has “made all the preparations to be able to start the vaccinations immediately as soon as this is possible for company doctors”, according to chief human resources officer Wilfried Porth.

Employees there have been able to register for a vaccination appointment with the company medical service via an online platform since Monday.

As soon as there is enough availability, and the government gives company doctors the green light, Daimler will start to inoculate employees, the firm said.

Germany’s vaccination campaign has been very sluggish compared to some other countries – and doesn’t come close to the countries leading the race: Israel, the UK and the US.

The graph below by Our World in Data shows the share of the population who have received at least one dose of vaccine across several countries.

The below chart shows the share of the population who have been fully inoculated against coronavirus.

Why is Germany lagging behind?

Medical staff are also not allowed to stray from the priority list, sparking concerns that vaccine doses are being left unused. This prompted four states to scrap the priority list for AstraZeneca last week, allowing all adults to sign up for it if they have a consultation with their doctor.

Germany also suffered setbacks on the speed of the campaign after suspending the AstraZeneca vaccine to investigate a possible connection to blood clots.