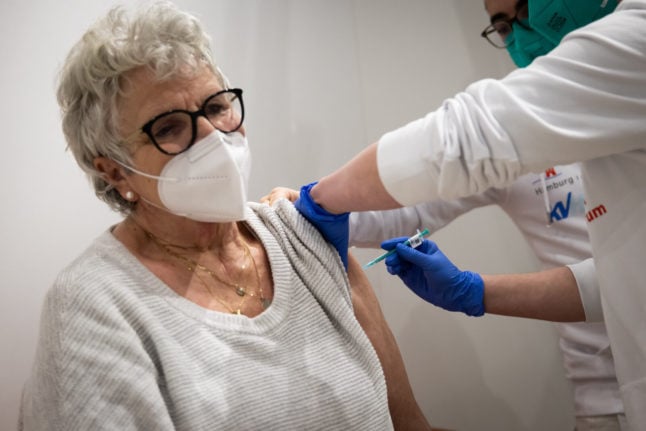 An elderly lady in vaccinated in Hamburg. Photo: Christian Charisius/DPA

The first thing to say about when you can expect to be inoculated against Covid-19 is that that the vaccine programme is being coordinated by the federal states.

German states have different processes and varying bureaucracy so it also depends where you live. Currently the best performing states when it comes to vaccinations are Bremen and Saarland.

The population has been grouped into four categories according to their likelihood of developing severe symptoms and their contact with risk groups or infectious people.

As a reminder: pregnant women and children under the age of 16 are not included in any of the following timetables as no vaccine has been approved for them.

But here is the rough timetable for when you should be in line for a vaccination.

The people with the highest priority on the vaccine list are everyone over the age of 80 and people who live in care homes. Additionally, carers who work with the elderly, and medical staff who work with highly vulnerable patients (eg those undergoing an organ transplant) and medics and nurses who work on Covid-19 wards, are the professionals in the first priority group.

Priority group two includes a long list of different people based on age, illnesses and profession. For starters, it includes all members of the public between the ages of 70 and 79.

Then there is a long list of illnesses that qualify people to be vaccinated in this group. People who are likely to develop serious symptoms based on a pre-exiting illness, including those who have had an organ transplant, people with dementia, severe phycological illness, acute diabetes, and cancer patients.

Two close contacts of people in care and of pregnant women can also be vaccinated here.

A long list of jobs also qualifies people to obtain a vaccination on this group.

Police who work at demonstrations, teachers at primary schools, kindergarten staff, carers for the severally disabled, and people whose jobs are relevant for the work of hospitals are eligible.

READ ALSO: ‘I finally might be able to go home’: What it’s like to be offered the Covid vaccine in Germany

Most states have already offered appointments in this group.

Bavaria was one of the first to move onto group 2: the southern state opened the registration process for appointments in early March.

Schleswig-Holstein announced in March that people in group 2 could start applying for vaccine appointments starting on Tuesday afternoon. The northern state appealed for patience though. While some 800,000 people there are in group 2 there are were initially only 200,000 appointments available.

Lower Saxony also announced in March that it was starting vaccinations on the second priority group.

Analysis done by the Süddeutsche Zeitung (SZ) predicts that the fastest states will complete vaccinations in this group by May.

This third group includes all members of the public aged between 60 and 69.

People in care due to any of the above mentioned conditions can also nominate two close contacts who can be immunised in this category too.

There is also a long list of occupations included. All teachers who don’t belong to group 2 are listed in group 3. The same goes for people in medical professions. People who work in state administration, in government, for the police, in fire and justice departments are also included.

The government’s plan is that people in this category start receiving their vaccinations in May. However, some states may vaccinate this group earlier if they have leftover AstraZeneca doses, like North Rhine-Westphalia did over the Easter weekend.

But the SZ’s analysis predicts that, at the current rate, the last people to be vaccinated in group 3 will have to wait until later in slower states like Saxony-Anhalt and Thuringia.

The rest of the population are then in line for their vaccinations. A condition for getting a vaccination is that you have health insurance in Germany, have a registered address here, or you “are normally resident” in the country.

According to the government’s timeline, people in this group should be in line for vaccinations starting in July. The plan is to have everyone who wants a vaccination immunised by September 21st.

Nonetheless, if the rollout continues at a slower pace, some people in this category would have to wait far longer before receiving a a jab, according to the Süddeutsche Zeitung.

So are we really going to have to wait this long?

Around a fifth of Germany’s 83 million inhabitants have received at least one dose of their vaccine since Germany started its vaccination programme at the end of 2020 – and the trend is rising.

And many experts expect the rate of vaccination to increase further in the coming months. However, there are concerns over the Johnson & Johnson vaccine being paused in the US over possible links to rare blood clots, which has an impact on the EU.

Additionally, GPs have been given permission to administer vaccinations in April. With some 50,000 doctors practices prepared to join the vaccine programme, this gives the rollout a significant boost. According to the National Doctors’ Association (KBV), these doctors would be able to vaccinate 5 million people each week.

The national vaccine agency, Stiko, has also stated that supply shortages with the approved vaccines will cease to be a problem in April.

This means that the rate of vaccinations should speed up considerably in the coming months – but we have to look out for supply changes or health investigations that may impact the way vaccines are given out in Germany.