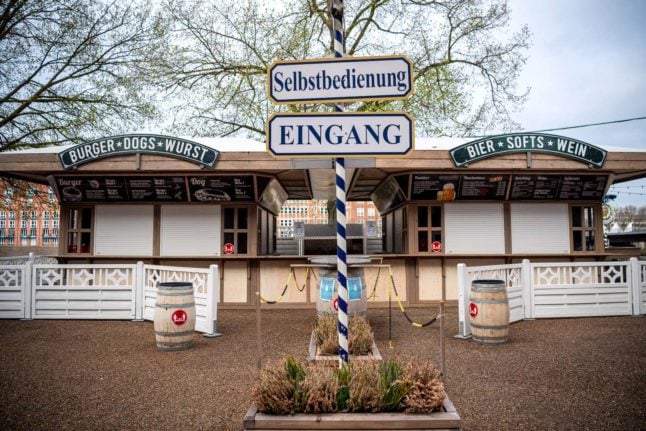 A closed beer garden and restaurant in Bremen on Thursday. Photo: DPA

On Thursday, Germany logged 29,518 coronavirus infections within the last 24 hours – the highest number of daily infections since the beginning of the third wave, and an increase of 0.3 percent from the previous week.

The Robert Koch Institute (RKI) points out that the number of new infections on Thursday may include late reports from North Rhine-Westphalia (NRW) from the previous day.

According to the RKI, 259 new deaths were recorded across Germany within 24 hours.

On Thursday last week there were 29,426 new Covid-19 infections logged within one day, as well as 293 new deaths.

According to the RKI, the number of new infections reported within seven days per 100,000 residents was 161.1 nationwide on Thursday morning.

The day before, the incidence was 160.1. According to the RKI, it is too early to tell if the rising 7-day incidence of the past days will continue.

Germany uses this number to decide when measures should be tightened, although other factors are also considered such as the capacity of intensive care units.

How’s it looking across the regions?

There are some big differences. Let’s go with the good news first. Things are looking very good in Germany’s northernmost state of Schleswig-Holstein, which has managed to get the number of cases per 100,000 people in seven days down to around 70.9. It’s the only state in Germany that’s manage to keep the incidence below 100.

In Hamburg, the 7-day incidence has been brought down to around 109 from around 164 at the end of March. As we reported, the city mainly stuck to the ’emergency brake’ rules – including a curfew – agreed by Chancellor Angela Merkel and the states at Covid crisis talks.

Many states decided to go their own way and not implement the tougher measures, resulting in the government amending a law to enforce nationwide restrictions.

German journalist Olaf Gersemann posted on Twitter how Hamburg’s incidence rate has decreased. In Saarland, which opted to open up public life with Covid testing requirements, the 7-day incidence rose from around 87 to 153 in a few weeks.

When it comes to districts, currently around 406 out of 412 districts have a 7-day incidence above 50, reported the RKI on Wednesday night.

The 7-day incidence in around 351 districts is above 100 Covid cases per 100,000 residents in seven days. Stricter measures, such as curfews and shop closures, will come into force in these places due to the government’s new nationwide ’emergency brake’ rules.

The map below by DPA gives an idea of the situation across Germany. The dark purple and dark red areas are the worst-hit places. Where are infections happening?

The RKI says infections are spreading particularly in households, social gatherings, in workplaces as well as in daycare and schools.

More young people are getting infected. On Wednesday a record 4,456 infections were reported in the under 15s age group. That’s around a 15 percent increase from the previous week.

The latest data shows around 21.6 percent of the population has received at least one Covid vaccine jab – 17.9 million people. Around 5.7 million people are fully inoculated with both jabs.

Experts say we are beginning to see the success of the vaccines.

The number of people dying from the virus also appears to be going down, likely because less older people are becoming infected.

The tweet below says that the mortality rate in Germany for coronavirus cases is continuing to go down. Around 2.51 percent of those infected have died so far – the lowest number since January 27th.

“The reason for the downward trend is probably the declining proportion of the very old among the cases,” said Welt journalist Olaf Gersemann.

The RKI has reported 3,217,710 Covid infections in Germany since the beginning of the pandemic. The actual total number is likely to be significantly higher as many infections are not detected.

The total number of people who have died with Covid-19 rose to 80,893 on Thursday.

The nationwide seven-day reproductive number (R-value) was 0.94 according to the RKI situation report from Wednesday evening (previous day: 0.95).

This means that 100 infected people go on to infect on average 94 more people.

The R-value represents the occurrence of the infection 8 to 16 days ago. If it is below 1 for a longer period of time, the infection process subsides; if it is consistently higher, the number of cases goes up.

What’s the situation in hospitals?

Medical staff have been warning in recent weeks that some intensive care units in Germany are reaching their limit.

The RKI says in its latest report, on April 21st, there were 4,987 Covid-19 patients in intensive care units on April 21st – an increase of 21 on the previous day. Around 2,772 people were receiving ventilation.