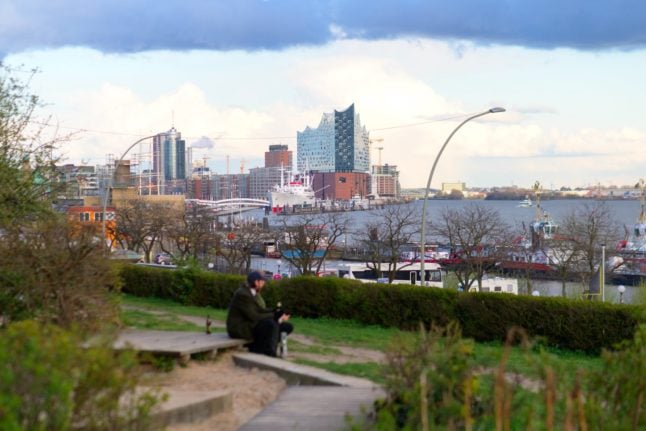 People sitting outside in Hamburg on April 12th. Photo: DPA

Chancellor Angela Merkel and the leaders of Germany’s 16 states agreed during their Covid meeting in March to bring in tougher protective measures to regions where Covid-19 infections go up – this was called the ’emergency brake’ mechanism, aimed at slowing down the spread.

However, as we’ve seen in recent weeks, many states opted to go their own way, prompting the federal government to change the law to force states to put in place stronger rules if coronavirus infections go up.

One state that has followed the ’emergency brake’ rule more than others is Hamburg.

What happened in Hamburg?

When the Hanseatic city exceeded the threshold of 100 Covid-19 infections per 100,000 residents for three days in a row in mid-March, mayor Peter Tschentscher (Social Democrats) reversed opening steps.

For several weeks now, Hamburg has been in a more restricted lockdown than other federal states, which have largely shied away from this move despite the increasing number of infections.

In Berlin, for example, shops have been allowed to stay open for people with a negative rapid Covid-19 test result.

These are the emergency brake rules that currently apply in Hamburg:

Have the restrictions paid off? A look at the data shows that Hamburg has been slowing down the spread of the virus – and curfews are likely to have played an important role, reported Spiegel in an investigation.

The number of new infections per 100,000 residents in the past seven days has been falling in Hamburg since last Wednesday. The incidence value is now 112.8 as of Wednesday April 21st, Robert Koch Institute (RKI) figures show, compared to 140.9 just over a week ago.

Just before the curfew came into force, the 7-day incidence stood at around 164.

The chart below by the Hamburg government shows the 7-day incidence going down recently. Hamburg currently has the second lowest number of Covid cases per 100,000 residents in seven days out of all the German states. The top performing state is Schleswig-Holstein with a 7-day incidence of 71.9.

The average 7-day incidence across Germany stands at 160.1.

In general there’s a positive trend emerging in the northern city-state. According to Hamburg authorities, there were 227 new coronavirus cases reported on Tuesday in the city – 42 less than a week ago.

The figures show that the curfew in Hamburg is working, said senate spokesman Marcel Schweitzer at a press conference on Tuesday. “We are seeing the first success, but we are still far from the target.”

Hamburg senator Andy Grote said the city is practically empty after 9pm and police had reported very few violations of the curfew.

But there are still concerns in the city about more people needing hospital treatment.

As of Monday April 19th, 311 coronavirus patients were being treated in Hamburg’s hospitals, according to the Social Welfare Authority, which is 30 more people than reported on Friday.

A total of 111 people are being cared for in intensive care units – an increase of 8 people. According to the RKI, 1,434 people have died in the Hanseatic city in connection with Covid-19 since the beginning of the pandemic.

Curfews controversial at the federal level

As part of negotiations on the nationwide Covid measures, curfews are a sticking point.

The Free Democrats said on Monday that too strict a curfew would result in “encroachments on fundamental rights”, and threatened the government with constitutional lawsuits.

The coalition, made up of the CDU/CSU and the SPD, then softened curfew rules in the draft of the law, saying exit restrictions wouldn’t come into place until 10pm and people could jog or walk outside alone until midnight.

There is also a dispute in science about the effect of curfews. “Danger lurks inside,” warned aerosol researchers in an open letter last week, urging leaders to focus on measures to avoid indoor social contact.

“Curfews promise more than they can keep,” criticised the researchers. “This does not prevent secret meetings indoors, but merely increases the motivation to evade government orders even more.” A jogger in Hamburg on April 19th. Photo: DPA

So are curfews useless? Studies in favour of curfews are highlighted in the government’s draft law, reported Spiegel. One of them comes from a research team at the University of Oxford, which said exit restrictions or curfews could curb the spread of the virus by 10 to 20 percent.

For the analysis, the scientists looked at the influence of various measures in 17 countries, however the study has not yet been published in an independent journal. Also, at the time of the investigation, the more contagious variant B.1.1.7, which has become the dominant strain in Germany, was not yet in circulation.

However, every country that got mutant strains of the virus under control –  such as the UK and Portugal – has at least temporarily put in place some form of curfew or ‘stay at home’ order.

Even if the risk of infection during an evening stroll in the park is low, researchers hope that the curfew will have another effect: if you are no longer allowed to go outside in the evening, you can’t meet friends in their flat for a glass of wine. And it is these private meetings that are considered the driver of outbreaks.

Politicians must “urgently communicate” that with the B.1.1.7 variant, that originated in the UK, “any unprotected contact outside of your own household indoors is no longer acceptable”, warned mobility researcher Kai Nagel from the TU Berlin in March.

So there are different views on whether curfews can push back the virus spread. Yet as the figures show, we can see the first signs of a rapid decline in infections in Hamburg.

In recent days other states or cities have been putting in curfews, including Cologne.

What about schools closing?

The Hanseatic city has shied away from one measure in particular: closing schools. Despite the other emergency brake measures, primary school students and graduating classes have still been allowed to attend the classroom, at least combined with distance learning.

On this point, the draft of the Infection Protection Act looks set to be tightened: schools would have to close at an incidence of 165 Covid cases per 100,000 people in seven days – previously, the draft put the incidence at 200.

READ ALSO: These are the planned changes to Germany’s ’emergency brake’ law

The German teaching union has even called for stricter rules on shutting schools.

SPD health expert Karl Lauterbach said he fears the virus is now rampant among families because many parents are too young to be at the top of the prioritisation list for vaccinations.

“Children and young people – and their parents – are becoming the centre of the pandemic,” he wrote on Twitter. “Therefore, school closings are particularly important now. Because otherwise many families will fall seriously ill in a few weeks.”

Some other federal states are taking action and applying the brakes before the nationwide law comes into force, likely this week. Schools and daycare centres in Mecklenburg-Western Pomerania have been closed since Monday, with only emergency care in place.

In Berlin, on the other hand, schools have been reopening for the seventh to ninth grades.

At least until Wednesday, when the Bundestag plans to vote on the Infection Protection Act, Germany will remain a coronavirus measures patchwork quilt.