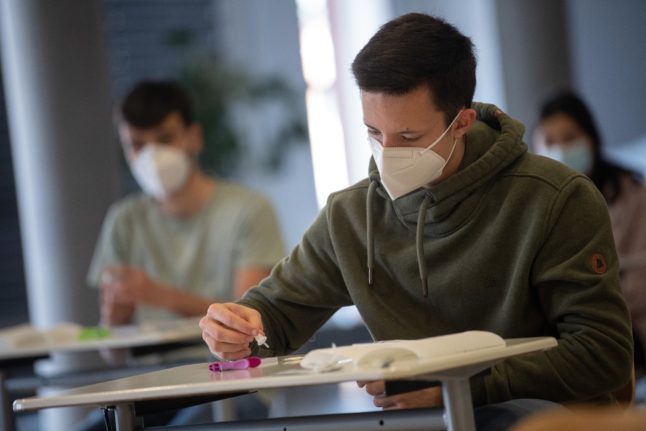 Schools in a graduating class in Groß-Gerau, Hesse on Tuesday. Photo: DPA

The German teaching union has called for emergency Covid-19 measures to be tightened once again, so that schools transition to online learning at a lower rate of infection than proposed by the government.

Under Germany’s Notbremse (emergency brake) measures, set to be voted on Wednesday, schools would have to close if more than 165 infections per 100,000 residents in seven days are detected.

Yet the president of the union, Heinz-Peter Meidinger, called the threshold, already lowered from 200 in new draft legislation Monday, “still too high”.

According to the recommendations of the federal committee on health, schools are not not to offer in-person teaching if the 7-day incidence rate goes above 165, though graduating classes and schools for children with special educational needs should be exempt from this.

In many regions, the rate of infection has already exceeded this threshold.

Miedinger stressed that he could not understand why schools should be held to a different standard to other areas of society.

He suggested that “in order to effectively prevent outbreaks of the virus in schools, in-person classes should stop when the incidence rate goes above 100”.

The national Covid-19 incidence rate in those aged 10 to 19 has already increased significantly, he added.

What are the new ’emergency brake’ measures?

Alongside these amendments to Germany’s Infection Protection Act legislation, a curfew will be enforced in regions where the number of coronavirus cases is particularly high.

Original plans introduced the curfew at 9pm, but new changes would delay the start to 10pm, with restrictions lasting through the night until 5am.

It will still be permitted to go jogging and walking alone until midnight, but group activities are forbidden.

The emergency measures will be decided on in the Bundestag on Wednesday and will take effect shortly after they are approved at state level. The rules will come into force when the 7-day incidence in a city or region exceeds 100 on three consecutive days.

‘German schools will largely have to close their doors’

Most areas have welcomed the changes. Gerd Landsberg, president of the German Association of Towns and Municipalities, told the Rheinische Post: “It is only right that the curfew begins at 10pm, otherwise we would have seen everyone rushing into supermarkets before they closed.”

He also believes it is a sensible decision to close schools when the incidence value creeps above 165.

“If we look at the current rate, the new law means that German schools will largely have to close their doors to students in the coming weeks.”

Some politicians have said that the new unified measures will win back the trust of people in Germany.

“The confusion caused by varying levels of enforcement of the emergency brake regulations across the country has sacrificed public trust over the past few weeks,” said Leipzig’s mayor Burkhard Jung.

“We now need to regain this trust through a cohesive nationwide approach, though at the same time it is good that the national emergency measures will be limited to the end of June.”

Klaus Reinhardt, president of the German Association of Doctors, recommended further criteria for the introduction of emergency brake measures.

Alongside the incidence rate, he suggested that measures should also take into account the number of new patients being admitted to intensive care units and those needing to be put on ventilators.