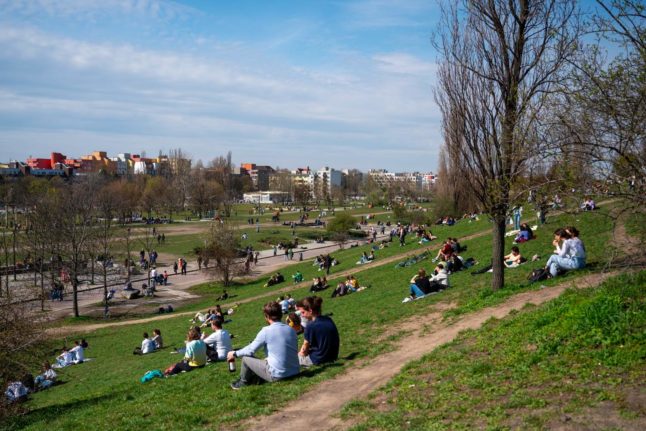 People in a Berlin park on April 11th. Aerosol researchers say the virus does not tend to spread outdoors. Photo: DPA

The group, made up of scientists and academics, slammed the constant debates about transmission happening in places like outdoor beer gardens or parks – and said the focus should be on indoor protection, including in the home, offices and schools.

In an open letter, the leaders of the Society for Aerosol Research (GAeF) called on the German government to partially rethink its handling of the pandemic.

They said protection against infection must take place above all where people spend time indoors.

The letter is addressed to Chancellor Angela Merkel, Health Minister Jens Spahn as well as to the state premiers and the health offices of the country’s 16 states.

The central statement of the group is: “The transmission of the SARS-CoV-2 viruses takes place almost without exception indoors.”

Outdoors, the virus is transmitted “extremely rarely” and does not lead to so-called cluster infections or widespread contagion.

The most danger of becoming infected by Covid comes from being indoors with others, the letter states. The risk of cluster infections is highest, for example, in old people’s homes, residential homes, schools, at events, choir rehearsals or during bus journeys.

The researchers warn: “If we want to get a grip on the pandemic, we have to make people aware that danger lurks inside.”

The group said the debate on coronavirus measures does not reflect current scientific knowledge, adding that many people have the “wrong ideas about the contagion potential associated with the virus”.

Measures such as bans on meeting in parks, closing popular routes for walks, or even night-time curfews give the impression that “It’s dangerous outside”.

However, these rules do not prevent “clandestine meetings indoors”, but “only increase the motivation to evade state orders even more”, they argued.

“The ongoing debates about strolling on river promenades, spending time in beer gardens, jogging or cycling have long since proven counterproductive,” the letter continues.

And the constant warning against contact even threatens to reinforce the “pandemic fatigue evident everywhere”, warn the members of the GAeF.

The group is appealing to the federal government, state leaders and ministries to strengthen protective measures indoors.

As few people as possible should meet indoors, they say, particularly because there is a risk of infection not only through direct contact with someone who is infected, but also if an infected person has previously been in the room.

The authors of the letter also mention regular airing or the use of air purifiers in old people’s homes, schools and offices, as well as urging people to wear masks indoors.

Who is the society behind the letter?

The Gesellschaft für Aerosolforschung (GAeF) was founded in 1972 as a non-profit association of pioneers of aerosol research.

It aims to promote scientific aerosol research both nationally and internationally.

The members of the society include leading national and international researchers as well as many students and PhD students.

The GAeF has about 350 members from 35 countries. The open letter was signed by a handful of leading members of the society, including the president Dr Chrisof Asbach.