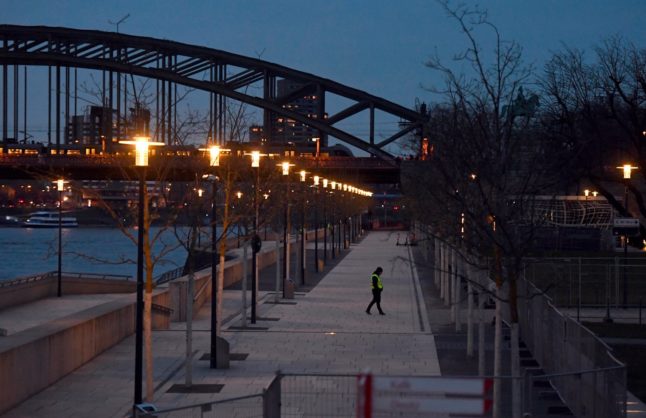 An ordungsamt worker in Cologne where a curfew from 9pm to 5am is in place. Photo: DPA

Politicians in Germany are holding crunch talks over a new nationwide ’emergency brake’ mechanism that would force states to implement tougher Covid rules when infections reach a certain level.

On Monday, Chancellor Angela Merkel’s conservatives (the CDU and CSU) plus the Social Democrat (SPD) parliamentary groups – which make up the coalition government – discussed changes to the Infection Protection Act draft.

If the law is passed by the Bundestag, states would be obliged to enforce new restrictions as soon as more than 100 new coronavirus infections per 100,000 inhabitants are registered over three days in a seven-day period.

Here are the proposed changes under discussion:

– Night-time curfews in badly-hit Covid areas should be in place from 10pm to 5am – an hour later than initially planned. Jogging and walks would be allowed until midnight. People would generally only be allowed to leave their homes during the curfew for work or emergencies.

– The collection of ordered goods (click and collect) in non-essential shops should still be possible even when there are a high number of Covid infections.

– In schools, virtual learning would be compulsory when a region hits a 7-day incidence of 165 Covid infections per 100,000 people or more. In the original draft, a threshold of 200 new infections per 100,000 inhabitants in seven days was specified. But experts said this was too high. For children up to the age of 14, sports should continue to be possible in groups.

– The outdoor areas of zoos and botanical gardens are to remain open to visitors with an up-to-date negative Covid test.

– Employers must provide two coronavirus rapid tests per week to staff who can’t work from home. If the employer says staff can work from home, employees have to accept this offer, according to parliamentary circles.

– All regulations are initially limited to June 30th.

Other parts of the draft include limiting gatherings of people from different households. Contact with one person outside of the household is permitted, with a maximum of five people being allowed together in hotspots.

When would this come into force?

The Bundestag wants to pass the law on Wednesday. It will then go to the Bundesrat – which represents Germany’s 16 states – on Thursday.

If it is passed, the update to the Infection Protection Act would be put into place as soon as possible, with the aim of breaking the third wave.

Federal Health Minister Jens Spahn (CDU) said it was “crucial” to take action in three different sections. He named companies, daycare and schools as well as “above all the area of ​​private contacts”, as the places where contact needed to be cut down.

Spahn called on states to introduce restrictions immediately. “Nobody has to wait for this law,” he said. “It’s an emergency brake. Ideally, the brakes have already been applied beforehand.” Some states have already started doing this.

Coronavirus cases continue to rise, as the Our World in Data graph below shows, despite cultural venues, restaurants and leisure facilities having been closed for months in Germany.

Is everyone in agreement?

If they aren’t, we’ll certainly hear about it during the Bundestag hearing on Wednesday.

“The Bundestag has to agree, without any reservations or conditions,” said SPD parliamentary deputy Dirk Wiese.

Criticism came from his SPD colleague Karl Lauterbach who said an earlier curfew from 8pm rather than 10pm would have been “more effective” and saved more lives.

Union parliamentary group vice leader Thorsten Frei (CDU) said the compromise will help “bridge the difficult weeks until the end of June at the latest”.

The draft law is suitable for “effectively breaking” the third wave of the pandemic, he said. On the other hand, the acceptance of the measures in the population will be strengthened.