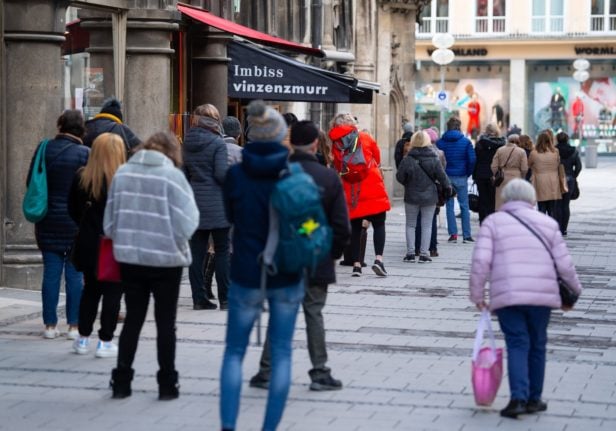 The German government agreed on Tuesday to controversial changes to a national infections control law. The amendments to the Infection Protection Act allow for more centralised power to impose tougher measures, forcing states to follow the rules.

At the moment restrictions on the pandemic are decided on between Chancellor Angela Merkel, representing the federal government, and leaders of the 16 states.

They have been holding crisis talks every three to four weeks for several months, often lasting for several hours.

However, in recent weeks many states have increasingly gone their own way and failed to introduce “emergency brake” measures decided on in the consultations.

This has prompted the government to pursue a more centralised route, with Merkel saying that it will result in Berlin having the power to enforce the “emergency brake”, which is “overdue” given the seriousness of the pandemic.

So the government agreed that on Tuesday. Does that mean it’s in place now?

Not quite. It actually appears to be a bit of a drawn-out process.

The adjusted law still has to win a two-thirds majority to be fast-tracked through parliament. But it is expected to pass with support from Merkel’s right-left coalition (made up of her conservative CDU/CSU bloc and the Social Democrats), and the opposition Green Party, reported AFP.

However, the Left Party and liberal Free Democrats (FDP) have pledged to oppose the law, with FDP leader Christian Lindner telling ARD broadcaster that “you can’t shut everyone inside to stop people meeting each other”.

There’s also been rumbling from some state leaders.

Lower Saxony’s interior minister Boris Pistorius told Die Welt newspaper on Monday that it was a “big mistake to take power from the regions in the middle of a crisis”.

READ ALSO: Where in Germany has the highest Covid-19 cases?

So what happens next?

Merkel wants to fast-track approval of the amendments but it’s still unclear how fast this can happen.

This Friday, the parliament is expected to deal with its first reading of the draft, according to German media reports.

The Bundestag is then expected to decide on the nationwide coronavirus ’emergency brake’ on Wednesday next week, according to parliamentary managers of the Green Party and the SPD parliamentary groups, Britta Haßelmann and Carsten Schneider.

However, it will take longer than eight days for the amendments to the Infection Protection Act to take effect, Haßelmann said. She added that the federal states currently remain responsible for responding to the rising number of new Covid infections.

According to the Süddeutsche Zeitung, the Bundes-Notbremse (federal emergency brake) could be implemented at the end of next week at the earliest. We’ll report on if the changes are to come into force sooner.

But will it get the situation under control?

The coalition’s draft is not enough to break the third wave of the pandemic, the Green’s Haßelmann said, calling for more far-reaching regulations, especially for workplaces and schools. An obligation to test in companies has already been watered down to an obligation for companies to offer tests in the plans, she criticised.

Virologists have also called for tougher lockdown measures to control the spread, which is being fuelled by more contagious variants, particularly the B.1.1.7 variant that originated in the UK and now accounts for almost all new infections in Germany.

What nationwide rules does the government want?

The changes to the law provide for uniform rules across Germany, including tougher contact restrictions as soon as more than 100 new coronavirus infections per 100,000 inhabitants are registered within seven days in a district or a city, over three days.

The governing coalition is still discussing amendments to the Infection Protection Act.

Chancellor Merkel on Tuesday said the third wave had a “firm grip” on Germany. “If we wait until all intensive care beds are occupied, it will be too late,” she said.

Merkel said the measures were aimed at “one goal  – to lead Germany out of this phase of steadily rising infection figures, intensive care units filling up, and the alarming high daily number of corona deaths”.

She added: “I am quite aware that these are tough restrictions that the new Infection Protection Act imposes, especially on districts above incidence 100: contact restrictions, closures of shops, cultural and sports facilities, night-time curfews.

“We have already managed once to reduce the number of infections to a controllable level again through consistent action. And we can and will succeed again.”

The Chancellor also referred to the increasing number of vaccinations being carried out in Germany. “We are moving towards the light at the end of this tunnel with increasingly greater steps,” she said.

What’s the latest on the coronavirus situation in Germany?

It’s not looking good. Medical staff are concerned about rising number of patients in intensive care wards, particularly those in younger age groups than has been previously seen.

“We urgently appeal to the politicians to pass the changes to the infection control law by the end of the week,” Gernot Marx, president of the German Association for Intensive Medicine (DIVI), told the Augsburger Allgemeine newspaper.

A week ago the RKI had recorded 9,677 new infections and 298 deaths within one day.

The number of new infections per 100,000 people within seven days was 153.2 nationwide Wednesday morning, according to the RKI. The previous day, the RKI reported a 7-day incidence as 140.9, compared with 110.1 a week ago.

Assessing the incidence of infection is still difficult because of delays in reporting over Easter. “We probably have to wait until the end of this week to see realistic numbers again,” virologist Christian Drosten of the Berlin Charite had said Tuesday on the Coronavirus Update podcast.

We’ve included reporting from AFP in this story