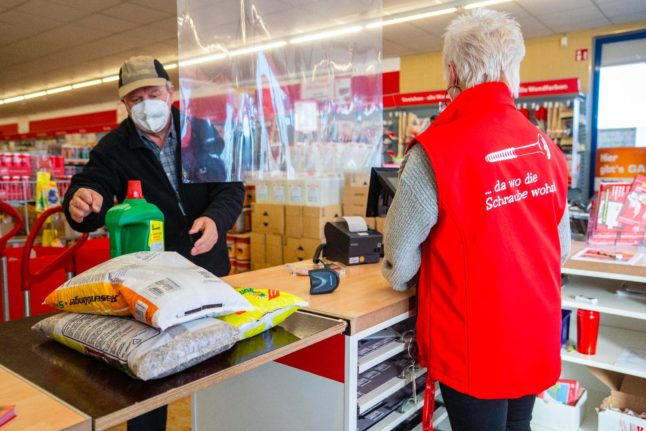 A DIY store in Neustadt Bei Coburg, Bavaria, on March 1st. Under the new plans staff with regular customer contact would be given Covid tests from employers. Photo: DPA

The federal government is pushing to pass a regulation to make it mandatory for employees in both public and private companies to offer regular coronavirus testing to their employees.

Companies would be obliged to offer staff Covid-19 self-testing kits at least once per week unless employees are working at home, according to the amendment to occupational health and safety regulations.

Employees at high risk of contracting Covid, such as those who have frequent contact with customers, work in closed rooms or who live in communal accommodation, would have to be offered two tests per week.

Under the draft plans, the tests would be paid for by employers.
“Everyone has to join in,” Finance Minister Olaf Scholz told Deutschlandfunk radio on Tuesday morning, adding that a national effort that was needed, Spiegel reported.
Some regions, including Berlin, have already taken steps to introduce mandatory testing for employers.
READ ALSO: Berlin makes Covid tests mandatory for all workers with customer contact

The obligation to offer regular tests to employees in offices and factories is the right thing to do, he said. Scholz said the target of having at least 90 percent of workers tested regularly had not yet been reached.

“We are now helping the rest with a regulation,” he said.

The German government also plans to extend other measures until June 30th in a bid to prevent coronavirus infections. They include requiring employers to offer workers the option of working from home.

This step is necessary because the pandemic figures are worrying, Heil told broadcaster ARD.

The market “allows for such tests to be obtained”, he said. Around 60 percent of employees have already been offered a test, he said, adding: “But that is not enough.”

Heil said the updated law on compulsory testing would be decided on Tuesday and if passed would come into force next week.

“But I expect everyone to take responsibility now,” the Minister urged. He also said that the choice of test was not mandatory: “All rapid antigen tests are part of it,” he said.

The move has received pushback from the business community in Germany, who say firms are already helping employees with testing.

“Once again, politicians are trying to pass on their duty to employers, not to mention the costs,” said Anton Börner, president of the Federation of German Wholesale, Foreign Trade and Services (BGA), to the Funke Mediengruppe.

The skilled trades sector is also opposed to compulsory testing for companies. “We continue to believe that a statutory testing obligation for our craft enterprises is neither necessary nor useful,” said the President of the German Confederation of Skilled Trades (ZDH), Hans Peter Wollseifer, to Rheinische Post.

He also criticised the state for wanting to “shift the responsibility for fighting the pandemic onto the economy”.

Most companies are voluntarily testing their employees or are preparing to do so. Mandatory testing would be “an unnecessary legislative action”, he added.

READ ALSO: How (and where) to get a free rapid Covid-19 test in Berlin